This week was a lot better than the previous ones, although it was a busy week, but in the good sense of the word. I have two new cover reveals open for sign-ups this week and another one coming soon and I am just so happy to be organizing more cover reveals. I enjoy organizing them and it’s nice to be able to give some authors free promo this way. I have 3 cover reveals open for sign-up at the moment, I think that’s the first time that happened. I also got a new review opportunity open for sign-up. So I spent a lot of time e-mailing with authors and making sign-up posts and media kits this week.

It also was a full week on the blog with a blog post every day and even one day with two posts. I managed to got soem blogging done, got a few posts written a cover reveal, a blog tour, next month’s bookish resolutions recap post. And two Lola’s Ramblings posts written and I drafted another one, but struggling with that one for some reason. I had the whole post in my head and when I went to write it down it just didn’t work, hoping to get my inspiration back for it soon. After that I need one more Lola’s Ramblings post for July, which is probably going to be a top ten series list, have to narrow down the choices first. I had hoped to write a few more posts, but hopefully next week. I did do some blog commenting, but again not as much as I hoped, but better than last week and I did manage to keep up with replying and commenting back.

On saturday I made a few tweaks on my Lola’s Blog Tours site, added a small about Lola’s Blog Tours widget so new visitors to the site immediately know what I do. I reworded a few things on the about me and tour host page and rearanged a few things. Once in a while I re-read my pages and make tweaks when necessary, I hand’t done the tour host and about me page in a while, so glad I got those done. Next up is my services page as I am thinking of offering marketing assistant services to authors as well on an hourly basis.

Snickers kept struggling a bit this week, her appettive didn’t return until thuesday evening and even then she hardly ate anything during the day and only became active during the night and started eating a bit. It was hard to see her so down. By Thursday we decided that putting her back in the cage with Smarties was the best option and her wound was recovered enough that we thought that would go well. After she explored the cage she headed to her sputnik and spent most of the day there, the Queen of the Sptunik is home again. Snickers and Smarties spent most of the next days cuddling and they both seem happier now that they are together again.

I had ordered three one meter pieces of fleeche for the rats with my grandma’s surprise money. And the fleeche arrived this week, so I cut them into pieces for their cage. I now have way too much fleeche and even some I didn’t cut into pieces yet, but at least we have enoguh now. And I coudl finally throw some old pices with holes in them away. With a sick rat I often have to do the laundry once every day just to keep up with the fleeche they make dirty. The new fleeche is bordeaux red, purple and green. Not that it matters to the rats which colours they are, it’s more for us humans. 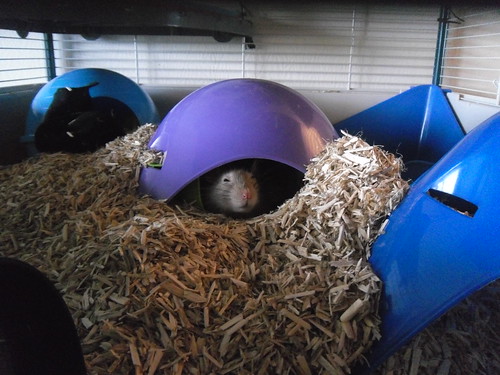 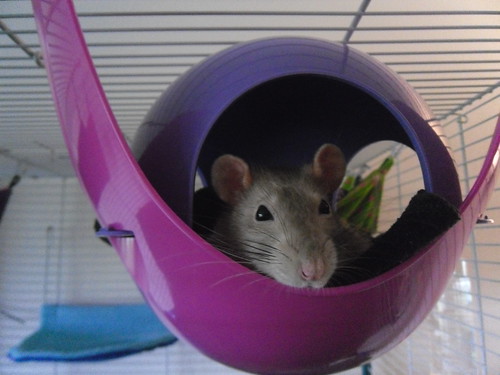 Smarties in the top Sputnik 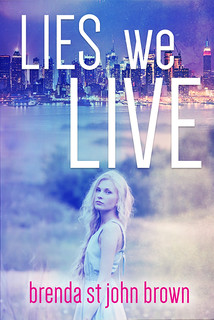 Lies We Live (The Truth Series #1)
by Brenda St. John Brown
Format: e-copy
Source: for review
You can find Lies we Live on Goodreads

Blurb:
Twenty-nine-year-old Ella Ingraham is a best-selling novelist. She’s also a murderer. At least that’s what most of the world thinks after her bastard ex-boyfriend brought a tabloid frenzy and a civil suit down on her for “negligence” following the stillbirth of their unplanned child at eight months.

Her New York – California drive is meant to be an escape after the hell of the trial, and Horatio, AK is just another random exit off the highway. Until she meets Josh Devereaux, part-time farmer, full-time tech genius holed up in his hometown after a few years in New York turned him into a bigger asshole than he ever thought he’d be.

Ella finds Josh Fascinating, capital “F”. Followed immediately by unnerving. He knows too much about her and, quite frankly, he tries too damn hard. That’s a red flag if she’s ever seen one. Or at least it would be if she were thinking with her head and not the more irrational parts of her anatomy. Like her heart.

I don’t read a lot of romantic suspense books, but this one caught my attention and I am really looking forward to reading it. And that cover is really pretty!