Today is the cover reveal for When faults Collide by Claire Granger. This cover reveal is organized by Lola’s Blog Tours. 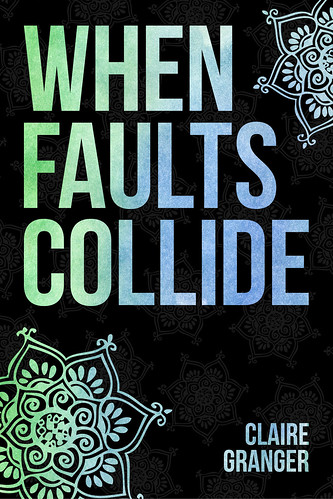 Blurb:
Asha is a 23 year old graphic designer and blogger living in Richmond VA with a dark past. She grew up in India in a brothel where her mother was a prostitute and came to America to live with her father when she was 13. 10 years later and while she has survived, she lives her life under a strict set of rules and lives fairly sheltered in order to protect herself. Her most important rule: never get involved romantically.

Then she meets Blake, a 25 year old music venue owner with an equally dark past. From their first encounter, Asha finds it difficult to follow her own rules and can’t deny the connection between the two of them.

Can Asha overcome her demons to go beyond surviving to thriving and will Blake be the perfect broken piece to the puzzle of her heart?

My Cover Review:
I really like this cover, the style and colours are pretty unique and it certainly would catch my attention. I like covers that aren’t too busy like this one and the use of onyl a few colours makes for s imple, yet stunning cover design. I like how it looks like the text and drawings are cut out of black and you see the colours behidn it. I like the green and blue colours.

The only thing that I like less and at the same time might be a good thing as well is how the cover doesn’t scream contemporary romance and certainly nto New Adult contemporayr romance. While most cover sin that genre feature a couple, this one doesn’t have any models on the cover at all. Which does make the cover stand out, but from seeing the cover it’s hard to judge the genre.

To conclude: I really like the cover, it’s a simple yet bautifull design and I like how the colours and black is used on the cover. On the other hand it is a very different from what you normally see for covers in this genre. So it is hard to guess the genre from the cover, but maybe the unique cover will make it stand out.

You can find When Faults Collide on Goodreads

About the Author:
Claire grew up in Texas, but her family moved to Virginia in 2001. She now resides in Richmond with her husband, 4 children (2 sets of twins!), and their fur babies.

She blogs over at The Granger Bunch and has her first novel releasing this summer! “When Faults Collide” is a contemporary romance, the first of the “Faultlines” series! She is already working on book two of the series as well as a non fiction and a few other exciting projects!

She is passionate about racial identity and equality issues, foster care, adoption, and non-profits that work to help victims of sexual assault and trafficking.

Do you think it’s important that a cover reveals which genre the book is?

16 responses to “Cover reveal: When Faults Collide by Claire Granger”