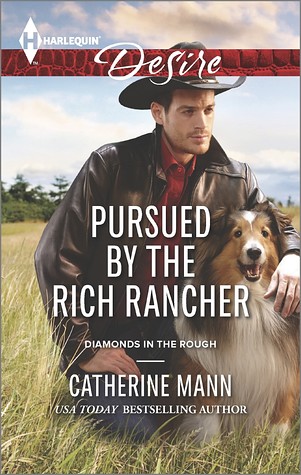 Blurb:
A millionaire cowboy must woo a single mom to earn his inheritance! Only from USA TODAY bestselling author Catherine Mann.

Single mom Nina Lowery has never understood the sex appeal of cowboys. Until she brings her son to a weeklong horse camp and meets the wealthy rancher in charge.

Seduction isn’t part of Alex McNair’s plan to earn his piece of his family’s estate. Yet plans have a way of changing. Nina and her little boy hold the key to Alex’s future. Breaking the promise he made to his dying grandmother is not an option…but neither is breaking Nina’s heart.

After finishing the first book in this series, One Good Cowboy, I started this one right after. I liked that this book focussed more on the ranch and used that as the setting. This book focusses on Alex, I didn’t like Alex too much in the first book, but we get to see a while different side of him here. And he’s actually more alike Stone than I expected, they are both quiet hard working men who love animals. While in book 1 the focus was one the dogs, here the animals still play a role, but different. We get to see some horses and ponies, even Amie her cats and some puppies.

While these books can read as standalones, I think it’s more fun to read them in order. There are a few cameo appearances of Stone and Johanna and they have their wedding, but it’s obvious the focus is on Nina and Alex and their romance. Also while the wedding was mentioned a few times, there wasn’t really much attention to the actual event when it happened. To be honest I think a bit overlap and focus on the characters from the previous book would have been welcome. This book does introduce Amie a bit more and I felt like I got to know her a bit better in this book already and I can’t wait for her book!

Pursued by the Rich Rancher is told from Nina and Alex their point of view. I really like getting to see both perspectives in a romance book as it helps getting to know both characters. Nina has been through a lot, she’s a single mom, her ex doesn’t care for their son Cody and Cody is autistic which means he needs a bit more care as well. I liked Cody as well and how his autism did play a role, but it wasn’t the complete focus, he was still a great kid who had fun and sometimes had it hard as well. Alex was a more interesting character then I first expected and I liked how we fell for Nina and tried to romance her, making her feel special. He didn’t chase her for the test, but because he cared, although I wasn’t too happy he kept such an important detail behind for a long time. He did come clean eventually, but it still gave me a bad taste, he wasn’t up front immediately. The circumstances did make it believable though and he never meant to lie to Nina.

The romance was hot and sweet, the connection was instant and their romance develops fast, but it still felt believable. It did move a bit too fast for my liking, but it was handled well and it was obvious these two felt something for each other. In real life I just can’t imagine someone falling so hard and fast. I did like their romance and how Alex took her on dates and made her feel special and there were some really sweet gestures, especially in the last scene. Alex is really thoughtful and his gifts were personalized and he cared about Cody as well. One thing that felt a bit off to me were how with some sex scenes her kid was close by, I know parents must do this all the time, but it still felt a bit off to me, especially as he could walk into the living room any moment.

To conclude: I really enjoyed this book and it was nice getting to know Alex a bit more. The character from the first book make some appearances but the focus is on Alex and Nina and their romance. The characters were likeable and while the romance developed fast I did like it. They really cared about his other and I liked how thoughtful and personal Alex his gifts were. The romance developed a bit too fast and I wasn’t too happy Alex didn’t confess to Nina about something earlier. I am looking forward to the last book in this series!

You can buy Pursued by the Rich Ranger here:
– Amazon
– B&N
– Kobo

What’s your favourite romance book featuring a cowboy? What do you like about cowboy romances?

10 responses to “Review: Pursued by the Rich Rancher by Catherine Mann”