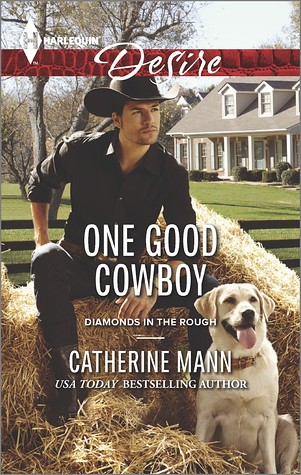 One Good Cowboy (Diamonds in the Rough #1)
by Catherine Mann

Blurb:
From Ex to Eternity?

To inherit his family’s empire, Texas cowboy-turned-CEO Stone McNair must prove he has a heart beneath his ruthlessly suave exterior. His trial? Finding homes for his grandmother’s rescue dogs. His judge? Johanna Fletcher, the woman whose heart he broke.

Sure, Johanna can handle a week traveling the country with her ex-fiancé to fulfilll his dying grandmother’s request. She and Stone want different things—plain and simple. But there’s nothing plain about Stone, or simple about the heat that still flares between them. One week may not be long enough…

One Good Cowboy features a family, Stone and his two cousins who get to hear the heartbreaking news their grandma is sick and she has tests for them to see who can take over as CEO of their company. His test is finding new homes for her dogs and he has to do that with Johanna, his ex and the company vet. To be honest I expected the focus to be more on the dogs and visiting multipel families to find the right fit, but the focus is mostly on the romance and their trip to find places for the dogs brings them together again and force them to acknowledge their still alive feelings. The dogs certainly play a part as well and it was fun to see them find their new families, but it was more that his grandma already had potential homes lined up and they had to confirm if those were right for the dogs.

Johanna wants a family of her own while Stone makes it clear he doesn’t want kids, that drove a wedge between them and why she left him, but now they are forced together and all their feelings come to the surface again. You can feel their chemistry and eventually they decide to see where it goes. While I liked these two together it felt like the kid issue was keeping them apart and it takes a while before that gets solved. I actually thought it took a bit too long at times I just wanted to shake sense in them, because while they still felt lust and even some love for each other they were both holding back and continue without really talking about the issue. And I just felt like if they talked about it all they could find a solution, if they love each other so much why couldn’t they try and solve this issue? In the end I liked how it got resolved and I think they needed time together before they could talk about it, but I still wished that the issue came up earlier.

The pace of the story was nice, but the end was certainly paced faster than the beginning and things finally got solved and rolling in the end. While I understand things took time, I wish everything got rolling a bit faster. Overall it was a fun and enjoyable story, it was a bit frustrating at times as I knew the characters wouldn’t have a real shot at their happy ending unless they talked about the issue which they were happy to avoid. It was nice to see the characters change and open up a bit as the story progressed. I saw one twist concerning the dogs coming early, but I was still happy with the ending and how they resolved things. I am looking forward to the next two books that deal with Stone his cousins.

Both characters had their issues and it was hard to get a grip on their personalities at first, but we learn more about them as the story progresses. I liked Johanna almost immediately, with her love for animals. I also think she made the right decision to walk away from Stone, but on the other hand also though it wasn’t the right move as she never moved on and never gave it a place. Stone comes across as stone cold at times, but you do notice he has a heart as well and cared about Johanna. It was harder to like him at first, but I liked him more as the story progresses and there’s a scene towards the end that illustrates the good influence Johanna has had on him. Although at first it was hard to see what connection they shared, the lust was there alright, but I never felt like they really had love. In this book they learn so much more about each other, that it was hard to imagine how their past relationship was and how they lived past each other. The ending was really sweet and I was happy with how it wrapped up and even surprised at the decisions Stone made at the end and what that said about what he learned about himself.

To conclude: I really enjoyed this book, I liked the family dynamics between Stone and his cousins and the plot with their grandmother giving them all a test. The addition of the dogs was also fun. The romance between the two characters was there, although I had some issues with it, especially because there was an issue that kept standing between the two of them and everyone knew they had to fix it before they could move on. They do change and open up to each other in this book, but that made me wonder why they never did so earlier. All in all it was an enjoyable book and I am looking forward to the next books in this series.

Have you ever read a book where the issue of building a family or not stood between the couple? Did you like how they solved it and how fast?

14 responses to “Review: One Good Cowboy by Catherine Mann”