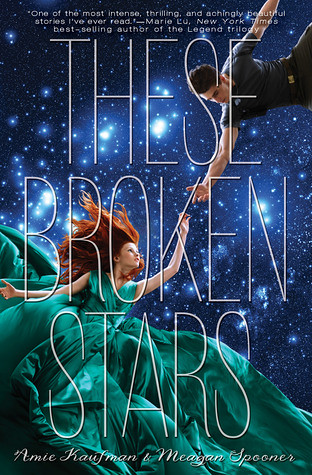 These Broken Stars (Starbound #1)
by Amie Kaufman and Meagan Spooner

Blurb:
Luxury spaceliner Icarus suddenly plummets from hyperspace into the nearest planet. Lilac LaRoux and Tarver Merendsen survive — alone. Lilac is the daughter of the richest man in the universe. Tarver comes from nothing, a cynical war hero. Both journey across the eerie deserted terrain for help. Everything changes when they uncover the truth.

My Review:
I heard so many good things about this book, which made me excited to finally pick up this book. In some ways this book was like I expected and in other ways completely different. It was a very well written book and I found myself easily turning the pages and getting lost on this book. It’s a weird mixture of genres, seeming sci-fi at first sight, but also containing survival, romance and even some horror elements. A big space ship crashes and Lilac and Tarver survive the crash and have to survive on the planet. That’s where the survival story starts. The story was slow paced at first and it is a mainly character driven book, there is also a strong plot, but it moves more slowly and I found the focus was on the characters.

There is a sense of wrongness that seems persistent through the book, it’s obvious something is wrong with the planet. Some mystery that is only revealed towards the very end of the book. The wrongness and mysteriousness almost gave it a creepy feel at times. It made my skin crawl. It was very subtle, but present. There was a twist towards the end that I didn’t like too much as it felt off and didn’t make much sense. I did really like the ending and how it things got wrapped up.

At first I had a hard time with the characters. Lilac was a spoiled brat and that’s putting it nicely. Her father is one of the richest and most powerful people in the universe and she’s his daughter. That fame isn’t all god, but it was hard to feel even remotely sorry for her when she was acting like a spoiled brat while being stubborn and refusing to listen to Tarver who knew what they where dealing with. Then again I also didn’t like Tarver’s attitude towards Lilac, sure she might act stupid and stubborn, but she was used to a life of luxury and now she has to survive on a wild planet. I mean that was obviously so out of her comfort zone I think he could’ve cut her some slack.

Like I mentioned this book is very character driven and it’s all about the characters and while they might start out difficult to like that changes, they change a lot. It goes slowly, but we see how what they go through impacts them, brings them closer together, makes them understand each other. They are forced together through circumstances, but it’s still great to see these go from almost adversaries to lovers. It goes slowly and the romance builds slowly, but it fit the book. And it kept my attention, so I don’t think the slower pace is an issue, although there were a few chapters where I wished things would speed up a little.

It’s hard to see Tarver and Lilac their romance separate from their situation and I still wonder if they would’ve connected without this experience, but then again you can’t see them without it as this experience shapes them and changes them and makes them right for each other. I didn’t really feel the romance at first, but it becomes clear how much they mean to each other and there are a few scenes which really makes it clear. Lilac might change even more than Tarver does and that might be my favourite part of this book, seeing her adapt to this situation and handling it better than i would’ve expected. She’s stubborn and not giving up, she does what is necessary to survive and I really liked her for that.

I really felt like the author put a lot of effort and time into developing this world and it felt like there was a lot of world building behind it all, but we see very little of it at the same time. The story takes place on board of a ship and on the planet where they try to survive. We see very little from the world except for this tiny piece and while I liked it, I also wished to know ore as I was fascinated by this world and wanted to know how everything worked and what more there is to this world. So I am hoping the later books in this series provide some more pieces of world building.

To conclude: These Broken Stars is a character driven slow paced survival story. There is a sense of wrongness that stayed with me most of the book and a mystery which we only understand towards the end of the book. It’s a powerful and well written book, although there were some parts I liked less. There was a twist towards the end that felt off, but also one twist which really intrigued me and appalled me at the same time. Seeing Lilac change was one of my favourite parts of this book and it’s amazing to see her change into a very different person. The romance is also well done, building slow, but eventually bringing them together. The world building felt well done, but we only get a small piece, I hope to see more of that in the next books.

You can buy These Broken Stars here:
– Amazon
– B&N
– Kobo
– The Bookdepository

36 responses to “Review: These Broken Stars by Amie Kaufman and Meagan Spooner”