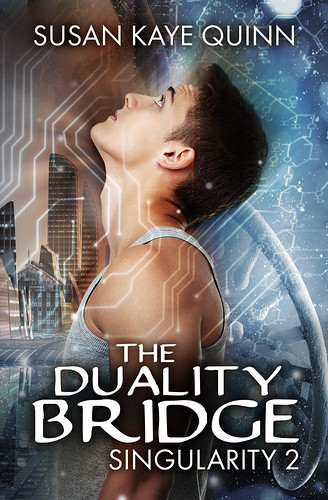 Blurb:
What does it mean to be human?

Elijah Brighton is the face of the Human Resistance Movement. He’s the Olympic-level painter who refused an offer of immortality from the ascenders—the human/machine hybrids who run the world—in solidarity with the legacy humans who will never get a chance to live forever.

Too bad it’s all a complicated web of lies.

Worse, Eli’s not even entirely human. Few know about the ascenders’ genetic experiments that left him… different. Fewer know about the unearthly fugue state that creates his transcendent art—as well as a bridge that lets him speak to the dead. But the Resistance is the one place he can hide from the ascender who knows everything the fugue can do. Because if Marcus finds him, he’ll either use Eli for his own nefarious purposes… or destroy him once and for all.

The Duality Bridge is the second book in the Singularity series and the sequel to The Legacy Human. This thrilling new young adult science fiction series explores the intersection of mind, body, and soul in a post-Singularity world.

I love The Legacy Human, so I was eager to dive into The Duality Bridge. The Duality Bridge is a great sequel, although I did enjoy it less than the first book. The Duality Bridge takes the story into a different direction, while the first book focussed more on the fugue state and creating art and this book focussed more on the fugue and what it really means and what Eli can do with it. More focussed on the power, the spirituality, religious implications and even some philosophy. And for me that was just a bit too far out there at times. I wasn’t a fan of the religious/ spiritual and philosophical direction the story took. It just went a bit too far into unbelievable territory for me, there are some topics I prefer to leave in fantasy as in sci-fi as in sci-fi I have a hard time wrapping my mind around it. There’s a lot of talk of souls, the afterlife, gods, religion, spirituality and such and I could’ve done with less of that and more focus on other elements. And there was a plot line towards the end that was a bit too far-fetched in my opinion. However there was also enough that I did enjoy. It’s very well written and the pace is steady with enough going on. So even though I didn’t enjoy all aspects of the story I still enjoyed the way it was written.

Everyone wants to own or control Eli and while getting captured and escaped Eli tries to find out what exactly the fugue state is and what he is capable of. And I have the feeling he still only scratches the surface in this book. He’s a bit overpowered when you realize what he is capable of. The story and world is very interesting. And I liked seeing where the author took the story. The ending upped the pace and when the dust settles I am not sure what all these events will mean for the characters. The title really fits the book and the word bridge is true of Eli in so many different ways.

There is some hint towards romance and even a love triangle almost, but the focus isn’t on the romance. I wouldn’t have minded a bit more focus on the romance though. I really like the romance that is present in this book, Eli has feelings for both Kamali and Lenora and I feel that in this book he works through his feelings for both of them and while there is no real decision, it never was a real love triangle either. I do think Eli has made his decision at the end of the book, so that’s good. I really liked seeing him and Kamali together as I think they make a great couple.

When it comes to world building this book adds a lot, it changes a lot and gives the world a different feeling as more is revealed and unlocked. I feel like this book really gives a feel of what this world is around, the fugue state, the question of having a soul, the ascender, ascender tech and Orion. We learn more about it all and things make more sense and fall in it’s place. It almost feels like the first book was a bit of an introduction, showing the mostly human side of the world and in this book we really get a feel for the more sci-fi and futuristic elements of this world. It really sets the stage for the rest of the books in this series I think. I did like how Susan build on the world building and expanded it without it being too overwhelming. It was a bit much to take in and understand at times, but I think Susan did a good job with the world building.

To summarize: This as a great sequel! Although it wasn’t as good as the first book in my opinion. I wasn’t a fan of the more religious/ spiritual direction the story takes and a few things are a bit too far fetched or out there for me. I did like the writing style and the pace and the story progresses nicely. There’s a lot more we learn about the world and the characters in this book and there’s a bit of romance that’s also dealt with. It was an enjoyable book even though I didn’t like all aspects of the story I still enjoyed it and am curious what will happen next.

Which series did you enjoy the first book more than the sequel, but the sequel was still enjoyable as well?

8 responses to “Review: The Duality Bridge by Susan Kaye Quin”