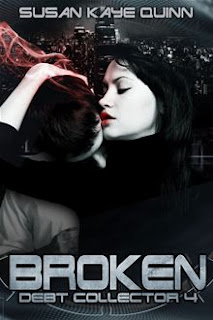 Blurb from Goodreads: Broken– EPISODE 4 of the Debt Collector serial. Contains mature content and themes. For young-adult-appropriate thrills, see Susan’s bestselling Mindjack Series.
What’s your life worth on the open market?
A debt collector can tell you precisely.

Lirium tries to free himself and Ophelia from the Kolek mob, but Valac has other plans for him.

Broken is approximately 15,000 words or 60 pages, and is the fourth of nine episodes in the first season of The Debt Collector serial. This dark and gritty future-noir is about a world where your life-worth is tabulated on the open market and going into debt risks a lot more than your credit rating. Episode 5, Driven, releases 5/1/13. For more about the Debt Collector serial, see DebtCollectorSeries.com

My Review:
I bought this episode as soon as I heard it was released. The 2 week wait for this one was really long and I was so excited to finally start this episode. I planned on reading just one more chapter before going to sleep and ended up reading the rest of the episode too. I just couldn’t stop reading.

The story continues after where Lirium ended up in the last episode. Almost no time has passed and was looking forward to see how Lirium would get himself out of this situation. I have to say I was surprised at what happened. New twists and turns and we learn more about Debt Collectors and the mob.

I was also really surprised and glad to learn more about Ophelia in this book. There is something quite important to her personality we learn in this episode and something about her past that really surprised me. I really got a better idea of who Ophelia is in this episode and I think she is a great character. Lirium shows some strenght in this book and I loved how determined he was to get out of the mob. Also his reluctant to perfom certain tasks made him seem more real and believeable to me. he really is a good character.

Again some things are added to the world building in this book, mainly we find out more about the mob and some tidbits about debt collectors again. There are also some descriptions of the city, which made me realize how dark and gritty this world really is.

To Conclude: this 4th episode is again fantastic. I love where the story goes and I was surprised a few times. I liked getting to know more about Ophelia. And there is some world building added about the mob. I can’t wait to read the next episode! These two week waits are really too long, but I’ll try to be patient.