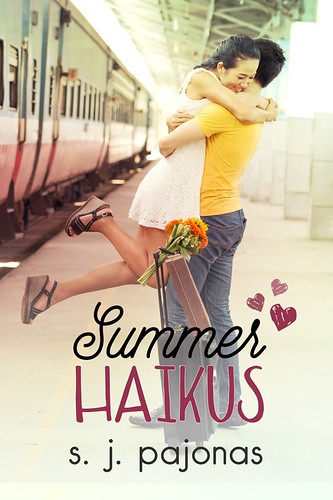 Blurb:
“When it comes to fight or flight, I always choose to run like hell.”

But when Isa’s mother is hospitalized, she has to abandon her summer plans to run the family’s Tokyo business. Masa’s offer to help makes it impossible for Isa to ignore him — and the firecracker kiss they shared half a world away. Everyone expects the world of her, but the pressure to please them all is as oppressive as the Tokyo summer heat. The simplest answer to all her problems? Run.

My Review:
I received a free copy from the author in exchange for an honest review.

Ever since I first heard of Summer Haikus I couldn’t wait to read it. And I can say it’s been worth the wait. I loved this book. It’s a great summer romance read! I love Pajonas her writing style and I got quickly sucked into the story and didn’t want to put it down. This is exactly the type of romance book that I love.

Summer Haikus follows Isa, who is half Japanese and half American. She has been studying in the US, where her father lives, but this summer she’ll stay with her family in Japan and help prep her best friend Halley for her race during the Olympics. I liked how Halley was the popular girl and who you would expect to be the main character, but the focus was all on Isa and her summer. Things don’t go according to plan and she ends up helping run the family Ryokan (a traditional Japanese hotel). I really liked the scenes in the ryokan and how Isa does her best to learn as much as possible.

Also while this book is part of a series it can be read as standalone. Both books in this series feature an Asian themed romance, but they are both standalones and feature different characters. They do have the same excellent writing style and feel though, so if you enjoy one of them I would recommend you give the other book in the series a try as well.

I instantly connected with Isa, from her planning and her anxiety issues, I could relate to her and she was such a likeable character. She’s madly in love with her best friend Masa, but doesn’t dare make a move on him. She’s a nice person who doesn’t hesitate to help others. I also liked how the author handled her panic attacks and anxiety, it was felt very realistic to me. Her panic attacks never go fully away, it doesn’t solved, but always will be a part of her life. It also wasn’t the focus of the story, but just another aspect that was present. Isa did her best not to let it rule her life and did her best to make sure she didn’t get her panic attacks by planning everything. When things don’t go according to plan though, she has trouble adapting.

I also liked her bond with her best friend Halley. Halley is a happy person filled with energy, who’s gearing up for the Olympics. She has limitless energy and was a great friend to Isa. I did thought the Olympics would play a bigger part in this book, but it’s really a miner part and almost felt like just another race. They are a few mentions of the Olympics and quite some scenes where they are running and training for the race, but there was only one scene that actually took place at the Olympics towards the end of the book. I did like how the author wrapped up the race and on the other hand I guess it was fitting the Olympics wasn’t a bigger part as this is Isa her story.

Masa, the love interest, is almost too perfect and he’s a great character. He loves arts and liked to paint and write haikus. Those haikus pop up a lot in the story and were a fun addition. He never had the freedom to really pursue his passion and I felt sorry for him. His parents want for him to get a good job and doesn’t believe he can make it with his arts, which was a very realistic struggle. He’s also a genuinely nice person and he’s perfect for Isa.

The romance was one of the best parts of this book. Isa and Masa are perfect for each other and there are this little gestures that meant so much and Masa’s haiku’s which are woven into the story. I loved seeing them go from friends to lovers. I love a good friends to lovers romance and this one was well done. their relationship isn’t always easy, but I enjoyed seeing them figure it out. there was one scene where I got a bit annoyed at Isa as she kept something a secret from Masa and it felt really out of character as she usually shares everything and I just knew things would go wrong when the truth comes out. They have some small fights, but I liked that they did their best to get through it and apologize if they were wrong. They are just perfect for each other and their romance was so sweet!

While it is a romance novel and the romance plays a big part of the book, there is also a lot of story and other plot points around it. Like Isa her job at the Ryokan, her grandparents, her mom who’s in the hospital, living in Japan, Japanese festivals and the other characters she meets. there’s also a lot of focus on the future and trying to figure out what they want from their life and future. Oh and Isa has her own youtube channel, which was a fun addition. I almost wish it was real so I could check it out. There are a few more hints like this that makes it obvious it takes place around now with all the modern technology we have and I liked what that added to the story.And the ending was just perfect

Most of this book takes place in Japan and I loved the setting. I really learned a lot of new things about the country and culture. My favourite part was the Ryokan and how they treat their customers. I really liked seeing this view of Japanese hospitality. The book is also filled with little details that make you feel like you really are there in Tokyo with Isa. It’s obvious the author knows what she’s talking about and I could easily imagine the setting. The setting really came alive and I loved spending time in Tokyo with Isa. It also deals with some typical Japanese issues, like how it is to be a Hafu (Half Japanese) in Japan, the Japanese hospitality and traditional Japanese arts like flower arrangement.

To conclude: This book is exactly what I am looking for in a romance. It had a great story, awesome characters and a setting I fell in love with. The characters were likeable and I liked how Isa her panic attacks were handled, very realistic. It’s a sweet friends to lovers romance, with a few hotter scenes as well. Isa and Masa are just perfect together and I liked those little gestures that showed they really got each other. The romance was well done and it felt realistic. The Tokyo setting was really done well and I could vividly imagine how it all looked. There is a lot of Japanese culture that is addressed in the story and I enjoyed learning more about Japan. If you are looking for a great romance book to read this summer, with focus on Japanese culture, I would certainly recommend you give Summer Haikus a try.

What’s your favourite type of book/ genre to read during summer?