Today is the release day of reunited and I am so excited to share my review with you! 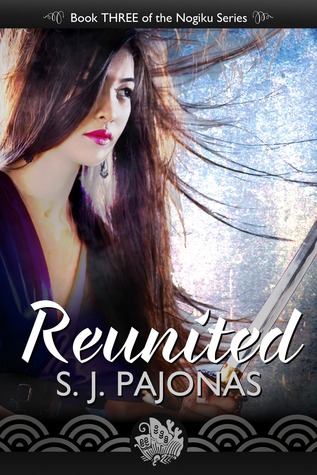 Ever since finishing Released I had been eagerly awaiting the release of Reunited and now it’s finally here! As started reading it as soon as I received my copy and it was so great to be back in the Nogiku world again. I love this author’s writing style and it just makes me feel at ease.

So many things happen in this book and when the land at Yusei, things aren’t what they expected. I loved seeing this new world and discovering right alongside Sanaa, her friends and family. There are some amazing plot twists and things that aren’t what they seem, revelations and changes. It was everything I’ve come to expect from this author and more. Reunited is an original book with lots of surprises and changes! It’s slow paced, but the pace fits the book perfectly and it’s one of the things I love about this series, how the pace is slow, without it being annoying. And despite the pace being slow, there’s always something going on.

There was a scene towards the end with smoking that bothered me a bit and I found one of the explanations a bit weird, but who knows it might be possible I don’t know that much about biology, but it sounded weird to me. And as I can’t stand cigarette smoke in real life, I always feel a bit off when it’s in a book, especially in a book I didn’t expect it.

There is so much character change and character growth in this book. At the beginning of the book the character wake up from hibernation and have changed and during the course of this book they change even more. There where some really surprising changes. Sanaa is an amazing main character and I liked how she grew and changed in this book, I also liked all her interactions with the animals. I love animals myself and it was fun to see so many animals in this book!

There’s less romance in this book as in the previous books, especially in the first half the romance seemed to be a bit on the back burner, but in the second half there was a bit more romance. I just love Sanaa and Jiro together and there where some really sweet moments between them!

There is quite a bit world building in this book as they discover their new home planet, but there are also some familiar things. Especially as the Earth in this book actually was the strange world, Yusei is much more normal I would almost say. Still it was fun to learn more about Yusei, although I wanted to know even more about this planet!

To conclude: I loved Reunited just as much as the previous books and this series keeps suprising me. I just wanted to keep reading and figure out what would happen next. I really liked how the character grew and changed in this book and I loved the animals! The first half of this book there isn’t so much romance, but there’s a bit more in the second half. I can’t wait to read the fourth and last book in this series, although I can’t believe it’s the last book already!

You can add reunited to your to-read list on Goodreads

And to celebrate the release of Reunited, there’s a sale for the first book in this series Removed. Removed is for a limited time free! So go grab your copy now! Need more convincing to start this amazing series? Read my review of Removed here.
– Amazon
– B&N
– Kobo