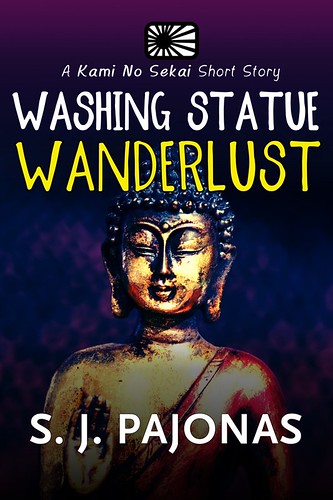 Blurb:
This statue doesn’t want to sit around. Can it persuade someone to take it on a holiday?

Yuki has been wishing for good health her whole life, and now she has the chance to get that wish fulfilled.

I need more great short stories like these! They are just so fun, short enough to read them in one sitting and long enough to tell a story and leave a lasting impression. Just like Rice Cooker Revenge, Washing Statue Wanderlust features a normally inanimate object in which a god lives and it comes into contact with a person that hears them. In this case the statue Arai and the girl Yuki already have know each for a little while, but something changes and the statue is trying to convince Yuki to go on a trip and take her with her.

It’s a short story, so things happen pretty quickly, but Pajonas manages to make sure the story is well paced and only during one scene did I feel like the pace was a bit rushed. It was a fun story and the statue is in such a difficult situation as she wants to travel, but can’t and it isn’t so easy to move a statue and be discrete about it.

I liked how much we still got to know about the two main character, like how Arai wants to travel and what she thinks of the temple she lives at or the cat that sometimes visits her. And how Yuki is a diabetic and how that impacts her live. I really could relate to her, as I am pretty sure if I was diabetic I would freak out about it as well and make sure to keep track of it. I also like my daily routines, just like her. It was fun to see Yuki realize that even while she was diabetic there was still so much she could do, it was powerful to see her change during this story. there definitely was a lot of character growth going on! Yuki also has a friend, who knows the statue talsk to her and she takes it in stride, she was a great friend to Yuki!

To conclude: Another fun book in this series and I am already eager for the next book. These books are so fun, they are a quick read, but still long enough to tell a story. I liked the characters in this book and could relate to them. There’s even some character development going on which was nice to see. There is some information about the world building added, but in a really low key way that fits the story.

What’s the best short story you have read? Ever read a series made up entirely out of short stories??