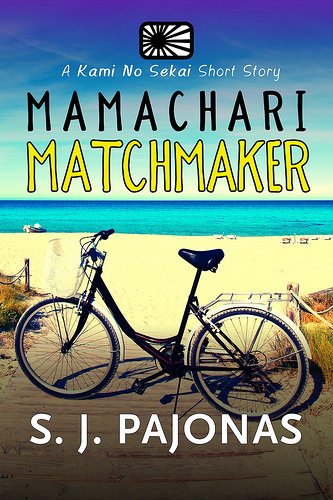 Blurb:
This bike longs to be owned by a family with kids but is bought by a quiet, cosplaying, young woman instead.

How will Mamachari help Eriko to find true love?

I love this short story series by SJ Pajonas. The stories are short enough to read in one sitting and they are a lot of fun and always make me happy. They don’t feel rushed and are very enjoyable. You would be able to read this series out of order as each book is about a different characters. This one features a Mamachari bike who wants to be owned by a family, but when someone buys him from the bike shop, it tuns out to be a single shy women who loves manga and cosplaying. Mamachari doesn’t let go of his dreams and decides to find a guy for his new owner.

It was a fun and light-hearted story, I liked how the bike was trying to play matchmaker and how Eriko actually gave it a try with the encouragement of the bike. I like the stories with how these items have a personality and while they can’t move of their own or go where they want to, they still have the power to help others around them who can hear them. I just love this concept and I think it would be fun to be able to talk to items and hear their stories or how they experience things. I liked the bike and how he was chasing his dream, even though he was a bike. Eriko was also a fun main characters, I liked how she loved her manga’s and cosplay and didn’t want to change to get a boyfriend. I liked how she was just herself and eventually found someone who liked her for who she was. Although I was a bit sad she threw out her plushies. I am grown up women and still have a lot of pluchies on my bed and am not throwing them away for any reason and I felt like Eriko didn’t need to throw them away to be more mature. We meet one of Eriko her friends who is really mean and basically implied she had to change as she was an embarrassment, I am glad Eriko didn’t listen, although it did make angry at that character. Why would you need to change to be loved? Eriko deserved to be loved like she was and I am glad that happened.

There is also a bit of romance in this book and it was just so cute and adorable and I was even a bit sad it was so short as I would’ve loved to see their relationship develop more. We get their first meeting and first date and it was just so sweet and fun to see them give this a try. I loved how Henry also liked manga’s and liked Eriko for who she was. I also liked the twist how Henry was an American in Tokyo and was trying to be polite, but eventually that actually got him into some trouble as he didn’t dare say no, but it was kinda funny. So the romance was really well done and it didn’t feel rushed at all.

We get a few pieces of world building in this book. Like how it turns out there are lots of times with personalities and in the bike shop this Mamachari bike spoke with other bikes. There is also a mention of a toaster the main character Eriko had previously which she also could understand. This adds a piece of information to the world and it seems that quite some times have personalities, more than I expected at first.

To conclude: Another great short story! I love this series and how the items have personality and meet a person who can hear them. I really liked the characters in this one and the romance was sweet and well done. The epilogue was awesome as well. I also liked the message about finding someone who loves you how you are. And we learn a bit more about the world and the amount of items that have personality. These short stories always bring a smile to my face and leave me feeling happy. I can’t wait for the next one!

What’s the best short story series you have read?