What happened this week?
Again a busy week, I had a lot of work on Lola’s Blog Tours again, but it was all fun and I enjoy being busy. We got some colder weather finally and it was nice for a change to not have it too warm. I also tried out 4 different recipes from pins on Pinterest and I had fun cooking new things! I made Creamy Spinach Dal, Spiced Potato and Pea Parathas, Vietnamese Spring Rolls with Crispy Tofu and Lemon Crinkle Cookies. They all turned out pretty well :).

Last Sunday we had a one shot Fate roleplaying campaign with some of my boyfriends friends and we had fun, although I noticed I hadn’t preprared as well as last time and some things didn’t go as I wanted. I already started preparing the campaign with some of your friends which we’ll be finally starting next week. I hope that goes better!

Skittles health kept declining, monday evening she looked so bad we thought she wouldn’t make it :(. Skittles is normally our most active rat and it was breaking my heart to see her sitting in a corner of her cage sleeping and her fur looked so bad. She didn’t seem to have the energy to clean herself or do anything and she looked really bad. Then we found out she didn’t seem able to eat and drink anymore, so we started feeding her porridge and that seemed to help, each day she started improving a bit more and on on thursday evening she started eating a bit herself again. We did kept feeding her porridge, because she still seemed to weak to eat enough herself. We also mixed her antibiotics twice a day with the porridge as she didn’t notice the taste of the antibiotics when mixed. And suddenly yesterday evening she got worse again, she looks bad and her fur is standing on end and she doesn’t seem to have enough power in her body to move or eat. I am constantly worrying about her and wonder whether she’s going to make it or not and it’s so sad to see her struggling. We don’t think she’s going to make it, she looked even worse this morning :(.

My boyfriend and I conitnued watching Star Trek Voyager and so far we’ve almost finished the first two seasons. I keep predicting who will end up with whom, although so far there isn’t much actual romance in the series yet, but I have several predictions. It’s a great series and I like seeing how the characters change and how some plot lines take some time to evolve over the course of several episode. And I have to say episode “Threshold” was a bit disturbing O_o. I really liked the episode Prototype. |I am starting to really like Chakotay and B’Elana as well!

I did got some reading done this week, although still not that much. I took a break from work on theusday as I wasn’t feeling too well and finally finished reading Reunited! Once I picked it up again I just had to keep reading till I finished it. I got some money from my grandma to spend on fun things, so I pre-ordered a few books with that and bought some new hammocks for our rats!

On the blog font I participated in a new meme called Read Play Blog, it’s a gaming meme for book bloggers. And I had so much fun participating in it! Beside that i did some thinking about the direction of my blog and so far didn’t come much further then deciding that I want to try to have at least 1 review and the Sunday Post each week. I briefly considered choosing days for different type of stops, but then decided I didn’t want to limit myself like that.

We had two lemons left in the fridge and my byfriend asked me what we could do with it. Just that day I had come across a recipe on Pinterest for lemon cookies and we decided to try making them. They turned out really well! Yum!

What to expect next week on the blog:
– Review: Ante Up by Amanda Carlson
– Cover Reveal: The Understatement of the Year (Ivy Years #3) by Sarina Bowen
– About Me: How do you find new blogs to follow?
– Review: Upside Down (Off the map #1) by Lia Riley 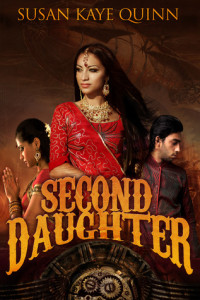 Blurb:
The sequel to the steampunk fantasy romanceThird Daughter (The Dharian Affairs #1) is here!

I loved the first book in this series, so I am really happy I finally got to buy it!