What happened this week?
This week was hectic and busy. This wek was Armchair BEa and while I did visit a lot of blogs, I kinda felt bad about not visiting more. this wa smy first time participatin in Armchair BEA and some days I just didn’t know where to start and who’s blog to visit. I felt a bit overwhelmed by how many bloggers actually participated and I totally forgot about the twitter chats, ah well better next year.

There where a lot of posts on the blog this week and I’ve been busy with things beside the blog too. I have some new tours open on Lola’s Blog Tours and some final preparation work for the awesome multiple cover reveal next week.
I also started reading about a new roleplaying system. The D&D sessions we play with a group of friends had derailed a bit and after my boyfriend had mentioned the Fate Core system a few times I suddenly decided I wanted to know where it was about. Luckily the core book is downloadeable for free, so I grabbed my copy, loaded it on my ipad kindle app reader and started reading. And I fell completely in love with the system, it works so differently from D&D and once I was able to let go of all those D&D rules I really got into the Fate system and how nice it was. The focus is much more on the story and characters and world building and there are less rules the bog it all down. So last friday we talked with the other players of our former D&D group and I was so enthousiastic about Fate and everyone agreed they wanted to try it as well. So now we’re going to try Fate with that group. I still have another D&D campaign running, which we restarted a few weeks ago and I am not sure what I want to do with that yet.

Another big thing that’s happening now is the start of the June Cover Reveal Summer Sale over at Lola’s Blog Tours. Basically it’s a cover reveal sale that lasts the whole month June. If authors book their cover reveal in the month June they get it for the half of the price. There’s also a giveaway for authors. And I am loving the banner my banner maker created for this event! 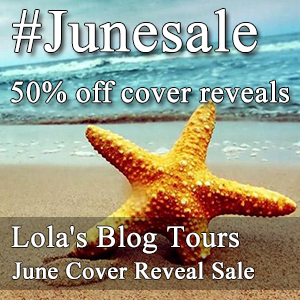 Beside all that I also went to Leyden with my boyfriend on saturday. We went shopping for a bit and lucnhed at this awesome shop called Jacketz. Basically they sell big potatoes(jacketz) with fillings. I always choose the jacket with beetroot salad, garlic sauce and dukah. It’s my favourite.

PART ONE of REVEALED is a companion short story to REMOVED, Book ONE of the Nogiku Series. The first two chapters of REMOVED are included at the end of PART ONE. Read REVEALED first or read it later, but don’t miss this look into the other side of Sanaa’s story.

Companion story to REMOVED, Book ONE of the Nogiku Series: http://amzn.com/B00F4IE978

Blurb:
(TRIGGER WARNING: This content deals with an account of sexual assault and may be triggering to some people.)

When Cassie Shaw looks at Noah Hunt, she sees a knight in shining armor, but she’s convinced he sees her as nothing but damaged goods.

Noah saved her from a brutal assault, talked her through a panic attack, and held her when she broke down crying.

Noah is a mystery. He avoids talking about his past, his phone rings with calls from four women he won’t talk about, and he receives texts from over a dozen more. To add to the intrigue, when Cassie tries to kiss him, he gets a look of sheer panic in his eyes.

Cassie finally finds a chink in Noah’s armor, and realizes that he’s even more damaged than she is.

Now it’s her turn to save him.