I am really excited to be part of the cover reveal for Taken by Chance (Laguna Tides #1) by Erica Cameron and Lani Woodland. Last year I read Sing Sweet Nightingale by Erica cameron and I loved it, so I can’t wait to dive into this new series.

About the series:
An exclusive California island, a tumultuous senior year, and lots of sandy beaches.

Laguna Tides is a private island off the coast of Laguna Beach, California. It’s a refuge for the families of the rich and famous, but it’s also home to Laguna Tides Prep and that is where our soon-to-come series of young adult contemporary novels is set.

A couple of years ago, my good friend Lani Woodland came to me with ideas for two different novellas she wanted to co-author with me. By the time we’d plotted everything out, we’d created an entire world and it would take five full novels to tell the whole story. Over the course of 2015 and 2016, Lani and I will finally get the chance to introduce the island of Laguna Tides and take readers through the senior year of five of the boys who live there.

First up on May 5th, 2015, meet Dare Andrews and Chance Montgomery in Taken by Chance. 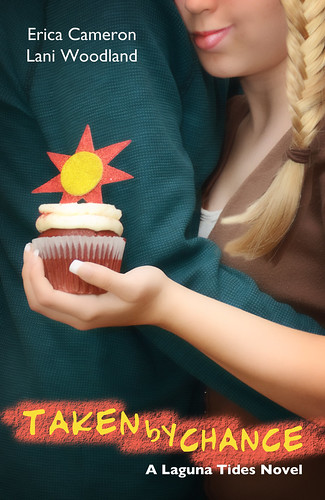 Blurb:
A single chance encounter can change your life.

Despite being the son of Hollywood’s hottest director, Dare Andrews has managed to steer clear of the paparazzi for seventeen years. But when his ex-girlfriend sells a tell-all interview to the tabloids, he’s suddenly hounded by fans and reporters alike. Dare is getting cynical fast, so he’s unprepared to meet a glass-half-full girl like Chance. And unprepared for the consequences after he helps her save face. Pretending to be the new guy in her life was easy enough when she was being dumped by her boyfriend, but the lie backfires.

What started as a random act of chivalry becomes something deeper as Dare and Chance find themselves trapped in their charade. The problem is that the more Dare gets to know Chance, the less fake their relationship feels. But secrets they both keep threaten their future, and with new storms overhead, will Chance’s lessons in optimism be enough to help Dare find the silver lining?

My Cover Review:
I am not sure what to think of this cover, it’s not bad, but I miss the island feel. I somehow had expected that to be part of the cover or maybe that’s just an issue of misplaced expectations. Also the cover feels a bit fake? Not sure why exactly, but the quality/ texture feels off somehow. Then there’s the girl how seems really small compared to the boy and is it just me or do they seem dressed a bit warm for a sunny island? This cover isn’t giving me the vibe to go grab this book now, luckily the series does sound interesting, so I’ll be picking this one up for sure.

I do like the colours and the cupcake. I think the cupcake is my favourite part of this cover, but that might be because I love food and food on the cover is a good thing in my opinion. Also the cupcake does look sunny and hints to the setting a bit. The font for the title, with the chalky orange background also is a fun addition. So there are also things I like about this cover.

Overal I am not a fan of this cover, it just feels off somehow. I do like the cupcake and the font used for the title and the orange/ yelow combo which seems to be the theme for this series. 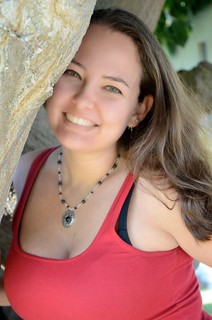 About Erica
After a lifelong obsession with books, Erica Cameron spent her college years getting credit for reading and learning how to make stories of her own. Erica graduated with a double major in psychology and creative writing from Florida State University and began pursuing a career as an author.

Erica is many things but most notably the following: writer, reader, editor, dance fan, choreographer, singer, lover of musical theater, movie obsessed, sucker for romance, ex-Florida resident, and quasi-recluse. She loves the beach but hates the heat, has equal passion for the art of Salvador Dali and Venetian Carnival masks, has a penchant for unique jewelry and sun/moon décor pieces, and a desire to travel the entire world on a cruise ship. Or a private yacht. You know, whatever works. 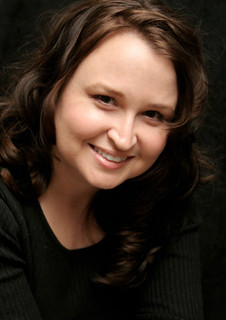 About Lani
I became an avid reader in elementary school, when I first discovered the Babysitters Club and Sweet Valley Twins series. In sixth grade, I began writing plays and recruiting (with force when necessary) my friends to act them out. Most of these early works were inspired by She-Ra, the epitome of girl power to my young self.

I have a hard time enjoying any book without at least a little romance in it. I live in Southern California with my husband, our two children and a large collection of board games. I have worked as a spot-welder, babysitter, janitor, photographer, gymnastics coach, and movie extra. I enjoy bonfires at the beach, hole-in-the-wall restaurants, speed talking, chocolate as a cure-all, and the word “precisely.”

I’m the author of THE YARA SILVA TRILOGY, including: Intrinsical, Indelible, and Inevitable. Melonie Piper and I co-authored the pirate fantasy adventure PIECES of JADE. We also co-wrote The Pom Pom Periodicals (THAT’S THE SPIRIT, GIVE ME A C and CHEER UP). I have two short stories in Enchanted: Loves Stories of the Paranormal that I co-wrote with Melonie Piper.

What do you think of this cover? And what’s the best cow-ritten book you read so far? Do you like pretend romances that turn real?

14 responses to “Cover Reveal: Taken by Chance by Erica Cameron and Lani Woodland”