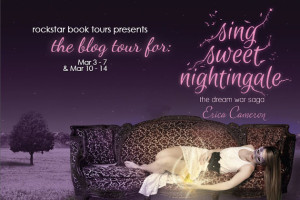 Today is my stop during the blog tour for Sing Sweet Nightingale by Erica cameron. I’ll be sharing my review of the book with you today and I loved this book! If you want to see the whole tour schedule click here. 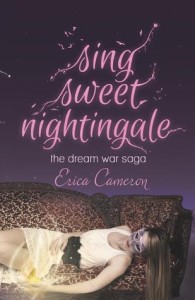 She pledged her voice to Orane, the man she loves—someone she only sees in her dreams. Each night, she escapes to Paradise, the world Orane created for her, and she sings for him. Mariella never believed she could stay in Paradise longer than a night, but two weeks before her eighteenth birthday, Orane hints that she may be able to stay forever.

Hudson Vincent made a pledge to never fight again.

Calease, the creature who created his dream world, swore that giving up violence would protect Hudson. But when his vow caused the death of his little brother, Hudson turned his grief on Calease and destroyed the dream world. The battle left him with new abilities and disturbing visions of a silent girl in grave danger—Mariella.

Now, Hudson is fighting to save Mariella’s life while she fights to give it away. And he must find a way to show her Orane’s true intentions before she is lost to Paradise forever.

Since I first read the blurb for this book I knew I ahd to read it. It sounds so original and combined with the awesome cover it sounded like a great book. And it certainly is a great book, it grabbed my attention from the first chapter and after that I just didn’t want to put it down.

When I picked up this book I didn’t expect it to pull me into the story like it did. The first chapter is emotions, pulls you into the story and it just made me want to know ore. I instantly liked Hudson and I wanted to know more about him. I also really liked the dual perspective, with some chapters from Hudson’s point of view and others form Mariella. It’s not only great to see both their perspectives, but it’s also nessecary for the story. Erica her writing style is really addictive and I found myself thinking about this book and wanting to read more every time I put it down.

While I really enjoyed this book there where some small issues I ahd with it. There where some palces that where a bit slow, these weren’t really bad as the story was just so interesting, but I felt like the pace could be just a bit faster in some places. Also the last 20% of the book felt a bit off to me. I think the author had a great point to end the book, but the story continues afterwards, while this does prevent a cliffhanger ending and helped set things up for the next book it just felt a bit off to me. Maybe it’s because I expect books to end at a certain point or maybe it was just some of the events that happened in this part. There where some developments that felt a bit off to me and I didn’t like doctor Carroll and the brain issues and questions he added and how Mariella changed. It just bugged me a bit.

The characters are great and likeable and I think it’s great how the parent and parent figures palyed an important role in this book and weren’t just ignored or put away. Horace knows from the beginning what’s up with Hudson and the existence of the dreamworld, even thought he has never been there. I really liked this, as normally in YA books everything is kept a secret from parents and parent figures. I really could get a good image from most characters and even the side characters felt real and not just as some fill-up. Everyone had their own goals and reasons and I loved how many different characters played a part in this book. I really liked K.T. she was one of my favourite side characters, she has been through a lot, but she is still fighting and trying. I also really liked both main characters, Hudson and Mariella, both are likeable characters and it was easy to understand why they behaved the way they did. Other side characters like Horace, Mariella her parents and Dawn really filled up the story. This book has a great cast of characters and I really liked almost all of them. The only character I didn’t like was Doctor Carroll, I don’t know why, but he just didn’t really fit into the story in my opinion.

At first I thought the romance would play a big part in this story, but it was less important then I expected at first. On the other hand I really liked how the romance was handled. Hudson isn’t helping Mariella because he fell crazy in love with her at first sight. He helped her because that was just the kind of person he is. The romance came later and developed really slowly. It was woven into the plot really well. Although when it finally developed it fell a bit off to me, while I liked them together, the way their romance developed at the end could’ve been done a bit better.

Erica has created an amazing world that looks like ours, but with small differences. There is another world, called the Dreamworld and creatures from that world try to lure humans in their world. The concept was so original. The world buulding is done really well, really subtly and the character themselves actually didn’t know a lot about the Dreamworld and we learn more about it alongside them. Even so at the end of the book there are still a lot of questions left about the Dreamworld, but in this book I liked the mystery. It wasn’t like the answers weren’t given, it was more that we found out how much the character knew, but not more. I can’t wait to learn more about this world in the next book in this series.

To conclude: I loved this book. It grabbed me from the first page and I couldn’t and didn’t want to stop reading it. The story is intriguing and the world building is done really well. The plot is original and all the characters where likeable. There where a few things I thought could’ve done better, the plot was a bit slow in some places and some events in the last 20% felt a bit off to me. But beside that I love this book and I can’t wait to read the next book in this series!

You can add Sing Sweet Nightingale to your to-read list on Goodreads. 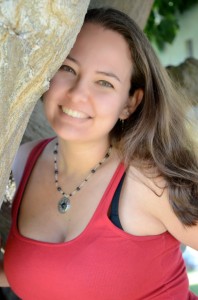 Erica Cameron knew that writing was her passion when she turned a picture book into a mystery novella as a teen. That piece wasn’t her best work, but it got her an A. After college, she used her degree in Psychology and Creative Writing to shape a story about a dreamworld. Then a chance encounter at a rooftop party in Tribeca made her dream career a reality.
Erica is many things but most notably the following: writer, reader, editor, dancer, choreographer, singer, lover of musical theater, movie obsessed, sucker for romance, Florida resident, and quasi-recluse. She loves the beach but hates the heat, has equal passion for the art of Salvador Dali and Venetian Carnival masks, has a penchant for unique jewelry and sun/moon décor pieces, and a desire to travel the entire world on a cruise ship. Or a private yacht. You know, whatever works.
Her debut novel Sing Sweet Nightingale releases March 4, 2014 from Spencer Hill Press. It is the first book in The Dream War Saga.
Erica is represented by Danielle Chiotti at Upstart Crow Literary. However, for subrights inquiries on Sing Sweet Nightingale, contact Rebecca Mancini at Rights Mix. Regarding publicity for The Dream War Saga, contact Cindy Thomas at cthomas {@} spencerhillcontemporary {.} com.