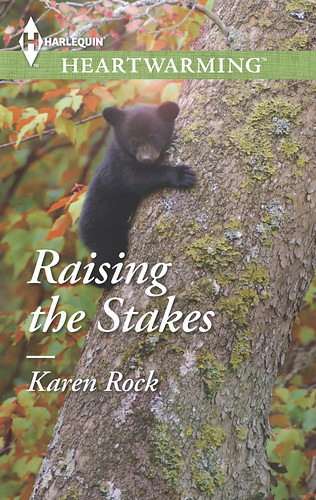 Blurb:
Hiding from the world…

Tucking herself away in the Adirondack woods was supposed to keep Vivienne Harris safe. From dark memories of the Bronx, from danger, from entanglements. But when an orphaned bear cub raids her pantry and conservation officer Liam Walsh appears with news of poachers nearby, her private, peaceful world is turned upside down!

Suddenly two forces are drawing her out—Button, the cub who needs her help, and Liam, the man who’s dead set against her rehabilitating the bear. If she can just win Liam’s support, Vivie knows she can give Button a good life. And maybe find the courage to embrace a future with Liam…

What I liked most about Raising the Stakes was the focus on the animals, it is a romance book, but there’s also a lot about the animals. The story follows Vivie who finds a bear cub eating her pies, she realizes the bear is hurt and tries to find help for him. Then officer Liam enters the picture and that’s the start of a great story and their romance. They start out as enemies on opposing sides, but grow closer slowly. I wasn’t a big fan of the conflict and how they always seem to fight with each other. I did however like the story and the beautiful setting in the woods. I love nature settings for books, so the setting really worked for me and Vivie her house sounds like a place I would love to live!

There’s also a cameo appearance from some characters from Karen her book Someone Like You, it was small, but the male main character from this book is the brother of the male main character in Someone Like You. I was a bit surprised at first as it didn’t list this book as being connected with that one, but it’s pretty small detail. So it’s more an extra bit of fun if you have read that book first, but if not you don’t miss it either. So I would still count them as standalones.

I instantly connected with Vivie, she fiercely loves her pets and I could relate to that. She’s been through some hard things and struggles with that, but gradually she grows and it was beautiful to see, there’s this scene at a bus stop that was really poignant and a turning point for her. Button also stole my heart, she’s the bear cub Vivie finds eating her pies and she’s adorable. I really felt for Button and what she had been through and kept hoping she would get her happy ending as well. On the other hand I had trouble connecting with Liam, he seems so hard and cold at times. He was obsessed with not feeling caged and while it was understandable with what happened in his past and then there’s the conflict with Vivie and I just though he should speak up and stay and not be so egoistical.

The romance didn’t completely work for me, I didn’t really feel their connecting and never got why they loved each other. While the book was well written, I just didn’t feel the romance. Liam didn’t see to care as much about Vivie her pets and didn’t try and see things from her perspective when it came to them, even though his reasoning was right I though he could’ve handled the issue better.

To conclude: I really enjoyed this book, set in a beautiful place and there was a lot of attention to the various pets and animals in this book and I loved that as I am an animal lover myself. I instantly connected to Vivie and liked her as a character and I liked Button as well, she’s adorable! I didn’t however connect with Liam the male main character and didn’t feel the romance. The ending made up for a lot as it was the perfect ending!

You can find Raising the Stakes on Goodreads 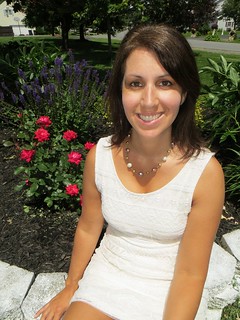 About the Author:
Karen Rock is an award-winning YA and adult contemporary romance author. She holds a master’s degree in English and worked as an ELA instructor before becoming a full-time writer. Currently she writes for Harlequin Heartwarming and her first novel for the line, WISH ME TOMORROW, has won the 2014 Gayle Wilson Award of Excellence, the 2014 Golden Quill Contest and a finalist in the Published Maggie Awards. The first novel in her co-authored YA series, CAMP BOYFRIEND, has been a finalist in the Booksellers Best and Golden Leaf awards.

Each blog that does a review durign the toru can do a giveaway for one copy of Raising the Stakes. Enter the rafflecopter below for a chance to win and scroll down for the tour wide giveaway!
a Rafflecopter giveaway

There is a tour wide giveaway for the blog tour of Raising the Stakes. These are the prizes you can win:
– a 100$ Amazon gift card (INT)
– a set of signed paperbacks of Wish Me Tomorrow, His Hometown Girl, Someone Like You and A League of Her Own (US only) 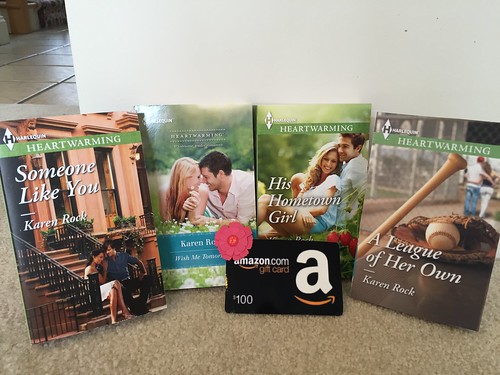 6 responses to “Blog Tour: Raising the Stakes by Karen Rock”