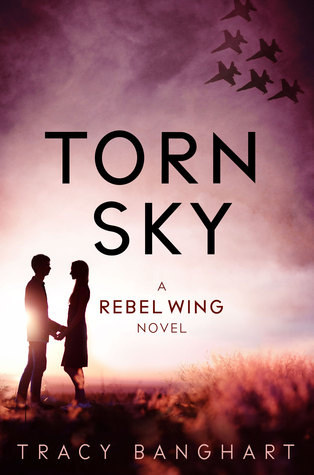 When Aris Haan brought down Safara’s biggest war criminal, she’d thought it was a turning point in the war. Victory was on the horizon, as was a peaceful future with her Promised, Milek.

But a deadly new threat has emerged: a Safaran bomb that could wipe out all of Atalanta in one catastrophic blast. Aris is tasked with finding the weapon before it is completed, a mission made more difficult when she starts to suspect that there is a Safaran spy in her unit. Friendships are tested, loyalties are strained, and suddenly Aris no longer knows whom she can trust.

In the epic conclusion to the Rebel Wing series, Atalanta’s fate rests on Aris’s shoulders. Can she find the bomb before it destroys everything—and everyone—she loves?

Torn Sky is the last book in the Rebel Wing series and I was so excited and curious to see how the author would wrap this series up. It’s a great ending to the series, the ending was pretty much perfect. Although a lot of bad stuff happens before they get there. Torn Sky is a bit darker than the previous books in my opinion, it’s more extreme. More sneak attacks, more fighting, more deaths and losses. It’s gritty and real and hard to read at times, but also very realistic. The author had no problem killing off a lot of characters, but I felt like by doing this she was able to show the true horrors of war. Lots of people die for the hope of peace and saving their country.

I felt like the first half of the book was a bit slow in comparison, setting things up for the rest of the book. Once I hit the second half though I couldn’t stop reading. I just sat there and finished the book as I had to know how it would end. The story mostly focusses on the war, the plot of a spy in the Atalan army, spies they plant in Safara and the bomb. I thought I had figured out who the spy was, but then Tracy Banghart managed to complete me surprise me when I did found out who the spy was. It was handled very well and was very well written as looking back there were hints, but I hadn’t picked them up. The whole book is very well written actually.

And the ending finally made me happy, although it’s bittersweet as well. They really have to fight for everything and things are hard. So many lives lost and sacrificed and this book had me close to tears a few times. There are also a few torture scenes which were hard to read, but luckily the scenes weren’t too long. And there’s this scene at the end, that was so good and hopefully, gah perfect! The author also takes her time wrapping things up and showing what the characters will be doing next.

Even though it’s the last book there is still a lot of focus on the characters and how they change from what they go and went through. The effect of the war are seen in how they acts and it’s hard to see them fighting and losing so much and still going on. Some characters really have a hard time dealign with everything and I feel so sorry for them for what they have to go through, at times I just wanted them to be happy and all we see is them going through more difficult times. I did like seeing their determination, their belief in that they were fighting for the right thing and doing the right thing. There are also some characters who really surprised me in this book. Characters who change in unexpecting ways or things we learn about them which I didn’t expect. And there are so many characters that I grew fond of only to see them die. There are characters who make the ultimate sacrifice for their dominion and while it often fit and showed the strength of these characters and their determination to fight till the bitter end of die trying, it was also hard to see so many lives lost.

Just like the previous book there is still the multiple point of views, which I really liked and it worked well for this series. There were times I wanted to shake some sense into Dysis though as she’s so reluctant to accept help in any way even when she needs it. There are also some sub plots about romance, which I really liked. It offers some relief form the bad stuff and offers a glimpse of hope. I really liked Milek and Aris their relationship and seeing their love for each other and how they handled it on the base and found ways to be close while still being professional, I thought they handled it well. There are also some other characters who find love, but it’s all woven very well into the story and I liked it.

To conclude: This was a great ending to the series. This book feels a bit darker than the previous books in my opinion. IThere is a lot of hardship, bad stuff happening, deaths and losses that happen in this book. It could be hard to read at times and this book had me close to tears a few times, but I did feel like Tracy did a great job to capture that feel of war, the helplessness and how anyone can die every day, it was pretty realistic in my opinion. The first half was a bi slow, but once I reached the second half I could not put the book down, literally and read the second half in one sitting. The characters also play an important part in this book, it’s hard seeing them go through this all, but I also admired them for how they kept going. There are quite some surprises and changes when it comes to the characters and it was well done. It was a well written book and a great ending to the series!