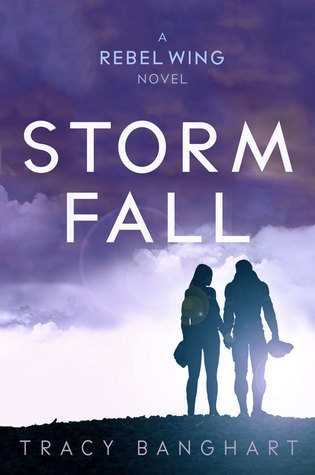 blurb:
In the action-packed sequel to Rebel Wing, Aris battles for life and love . . . and not everyone will survive.

Aris Haan gave up everything to join the Atalantan Military: her family, her boyfriend, even her identity. In the end, though, it didn’t matter that she was a war hero. When the all-male Military discovered that she was actually a woman, she was sent home and erased from history.

Now she has a chance to go back to the battlefield—as herself. But as hard as it was to be a soldier in disguise, it’s even more difficult now. The men in her unit undermine her at every turn. The Safaran army has spies everywhere, perhaps even on Aris’s stationpoint. And she’s falling for her mysterious superior officer, Milek. But their relationship is forbidden, just stolen moments between training sessions and missions. There’s no room for love in war.

Then Aris discovers that Safara’s leaders have set their sights on her, Atalanta’s hero. And she must find them before they find her . . .

I read the first book in this series quite some time ago and really enjoyed it and I can’t believe I waited so far to continue this series. Storm Fall pulled me right back into this world and I didn’t stop reading. There’s a lot going on, the war continues, Aris joins the military again, the integration movement to have women, a dangerous mission, trying to find Elom, Aris and Milek their relationship. It was great, lots of action, lots of plot lines, lots of point of views. I really like Tracy Banghart her writing style and the pace was done well.

Normally I avoid books that have anything to do with the military, but in this book I actually find that aspect interesting. Yes there is a lot of fighting and death and it’s hard to read about that at times, but the book is so well written and interesting that I enjoy it. There’s also a twist about a certain village and how things turn out to be different than expected that I liked. There are shades of grey. Then the ending changes things again, it sets things up for the last book, but does disrupt the happy vibe the ending had going on, but it does fits the story and makes me even more curious about the next book and I wonder how things will be resolved.

One of the things I like most about this book is the great cast of characters, There are so many awesome characters and they all have their own personality and motivations. There are characters who aren’t what they seem at first and I liked that. There are multiple point of views and it’s really well done. the author handled the multiple points very well, switching at the right moments and I enjoyed seeing the different perspective. I especially liked the addition of Dysis her pov, she’s so tough on the outside, but we see her vulnerable side as well.

I think I like Aris even more in this book, especially how she puts her own needs aside to help others. She really believes in what they are fighting for, but is also open enough to form her own judgements. She also deals with the events of last book and I think it’s good to see the continuity and how those events impacted her. And we see a reappearance of a characters that I hadn’t expected and was pleasantly surprised with how the character turned. And there are some fun scenes that shed light on Milek his relationship with his mom. It was interesting to see how she had changed based on what happened in the previous books.

There is some romance, but it’s really a subplot, nevertheless I really liked it. The romance is so well done and I liked how things developed. Aris and Milek are so sweet together and I liked seeing them figure out their relationship. I like how Milek accepts and loves Aris for who she is. I wonder how things will continues in the next book.

Just like the previous book there isn’t too much focus on the world building, but this book does have a world map, which was really handy. The story and characters are so well developed that the less attention to world building doesn’t bother me. there’s enough to get a feel, but the focus isn’t on it.

To conclude: I really enjoyed this book, the story is fast paced and action packed, with lots of things going on, I really like the writing style and this book kept my attention and I didn’t want to put it down. The characters are all great and I enjoyed spending time with them all. The multiple point of view works great for this book. There is a bit of romance which I liked. There isn’t much world building, but that’s okay. All in all this is a great sequel and I can’t wait to see how this series will ends.

Do you like military elements in your books? Why or why not?