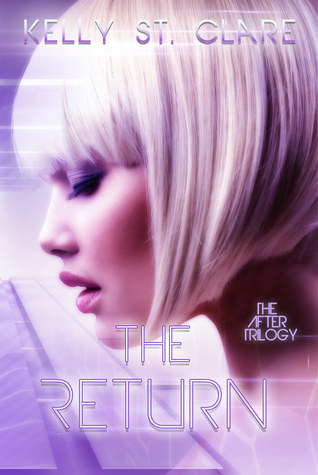 The Return (The After Trilogy #2)
by Kelly St. Clare

Blurb:
Three months ago, Romy emerged from the cultivation tanks after a year floating inside.

Now she undergoes regular testing as doctors work to find out … well, she’s not exactly sure what.

The tests must have something to do with the reason she can’t remember her knot—the single lucid memory the other insane soldiers on Orbito Four still possess. Whatever the researchers are searching for, if it aids the soldiers in the deathly war against the lethal alien invaders—the Critamal—the excruciating pain is worth it.

But a grey-eyed man has other plans.

Boxed in and caught, Romy is taken hostage by people who shouldn’t exist! They dress in black and carry weapons she’s never seen in her genetically enhanced life.

Can the new Romy reconcile with the old, or will the two halves of herself remain locked in an internal battle?

And if a victor should arise from this silent war . . . will it be the part of her that kills without hesitation, without mercy?

All it takes is for the cracks to join and blood will pour….

This author has quickly become one of my favorite authors. I really like her writing style and her books are so good! After reading the Retreat last month I was eager to see how the story continues and I am happy to say that The Return was a great sequel! I think I enjoyed it even more than book 1. There was no dull moment and I just wanted to keep reading to know what would happen next and how Romy would get through this.

As in many dystopian series the focus shifts a bit in book 2. Something happened at the end of book 1 and they’re dealing with the fallout of that now. There is more focus on the rebellion and we also see more of the Mandate. Plans are unfolding, secrets come to light and there are some great plot twists at the end and some brilliant foreshadowing looking back. I knew something was up, but wasn’t quite sure what until the end. And now I want to read book 3 to know how this is going to impact things, but sadly it isn’t released yet.

Romy isn’t the same person as she was before and it was interesting to see how she had changed, but also hints of how she was the same. She struggles with what happened and adapting to her new reality. And I felt so bad for everything she had to go through and I admired how she still managed to deal with everything so well. There’s some amazing character development going on here. Lots of changes and things she has to go through. And I kept wondering if she would get through all of this alive and sane.

We also get to see more of Romy’s knot and just like Romy they have changed a bit. I liked seeing them be together, but there was also the difficulties they face and the conflict between some of them. There is a bit of drama with some hints of a possible love triangle, but I liked how it got resolved, I thought it worked great here. Oh and there’s a great new side character we meet, Charlee. I really liked her and seeing her and Romy become friends. The bit of romance also continues and I am happy to admit that the romance really grew on me in this book and we get to know more about Atlas. Oh and I think we’ll get to see more of the aliens in the next book.

To summarize: If you’re looking for a great YA dystopian series I can’t recommend this one enough. It has aliens, genetically enhanced space soldiers, a nasty government and a rebellion. It deals with some tough topics, but also has some touching and fun scenes. Romy has changed since the last book and she has to go through some though stuff in this book. I kept wondering if she was going to get out of this alive and sane. There’s a bit of romance nicely woven into the story, there is a hint of possible love triangle, but I liked how that got resolved. The romance grew on me in this book. The focus of the series shifts a bit in this book, but it totally worked. There are some secrets that come to light and some great plot twists at the end. All in all this was an great sequel and I am looking forward to book 3!

What’s the last sequel you read?

18 responses to “Review: The Return by Kelly St. Clare”