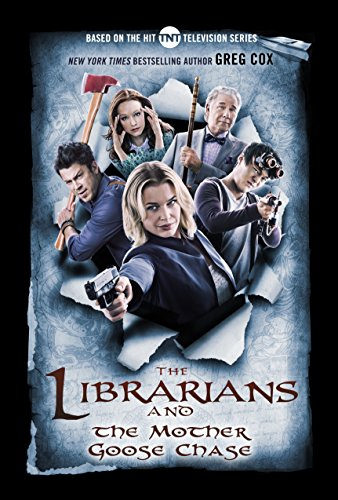 Blurb:
For millennia, the Librarians have secretly protected the world by keeping watch over dangerous magical relics. Cataloging and safeguarding everything from Excalibur to Pandora’s Box, they stand between humanity and those who would use the relics for evil.

Stories can be powerful. In 1719, Elizabeth Goose of Boston Massachusetts published a collection of rhyming spells as a children’s book, creating a spellbook of terrifying power. The Librarian of that age managed to dispose of all copies of the book except one, which remained in the possession of Elizabeth Goose and her family, temporarily averting any potential disaster.

However, strange things are happening, A window washer in San Diego who was blown off his elevated perch by a freak gust of wind, but miraculously survived by landing on a canopy over the building entrance. A woman in rural Pennsylvania who was attacked by mutant rodents without any eyes. And, a college professor in England who somehow found herself trapped inside a prize pumpkin at a local farmer’s market. Baird and her team of Librarians suspect that the magic of Mother Goose is again loose in the world, and with Fynn Carson AWOL once again, it is up to Cassandra, Ezekiel, and Stone to track down the missing spellbook before the true power of the rhymes can be unleashed.

I am a big fan of the tv series The Librarians, so when I was browsing netgalley one day and saw a book for the series I immediately hit request! This is a great book for fans of the tv series. As I already watched the first two seasons of the tv series I was easily able to visualize everything. There is a short recap and explanation of things and characters, but I think you might be a little lost if you start this without knowing anything from the series first.

I was impressed by how well the author brought these familiar characters alive in the book. The book had the same tone, style and feeling as the series. It was like watching an episode, but then in your head instead of on an a screen. It was a lot of fun to read and experience a Librarians adventure in a slightly different way. The author really handled the universe well and make it come alive and feel familiar for those who watched the series.

And it was such a good adventure as well. This book is centered around Mother Goose, As I am Dutch I didn’t know of most of the nursery rhymes used in this book sadly, but the ones that are applicable are all written out, so that helped a lot. It was fun to read. There are some good twists and I like how the librarians always use their smarts and knowledge to solve any troubles they run into. There are some interesting puzzles and mysteries for them to solve and they all seemed well thought out.

To summarize: This was a very well written and enjoyable read. I really like the Librarians tv series and this book managed to capture the essence and same feel of the series, but then in book form. I am really impressed by how well it was written and how spot on the descriptions and character actions were. I could very vividly imagine how everything looked like due to having seen the series first. Those who haven’t seen the series first might be a bit lost when reading this as there’s only a small amount of recap. The story was an enjoyable one filled with puzzles, mysteries and some nice twists and turns in true Librarians style. It’s written in multiple point of views which really works. Reading this book left me with a happy feeling and eager to watch season 3 soon. And I hope I can get my hands on book 1 in this series eventually as well, as the author did a great job bringing the Librarians to book form.

Have you seen the Librarians tv series?

10 responses to “Review: The Librarians and the Mother Goose Chase by Greg Cox”