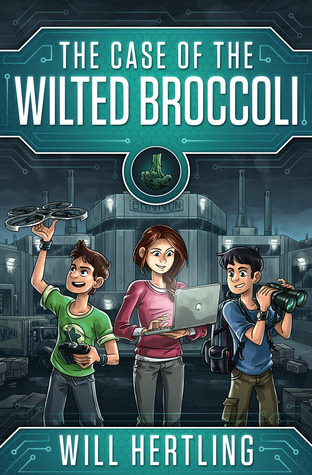 The Case of the Wilted Broccoli
by Will Hertling

Blurb:
Willow and her brothers, Elon and Linden, want to build the best science fair project ever, and their plan to build a quadcopter that can fly itself is sure to win. But they’re up against stiff competition, including Willow’s best friends.

The science fair takes an unexpected backseat when students at Mt. Hood Elementary start getting sick, including Willow. Everyone thinks it’s just a stomach flu, but Willow suspects there’s something wrong with the school lunches.

Willow, Elon, and Linden will have to work together, using their autonomous quadcopter and all their detective skills to trace their food back to its source to solve The Case of the Wilted Broccoli.

My Review:
I saw this book in an e-mail with discounted books and something about the cover grabbed my attention and for only 0.99$ I decided to give this book a try. I am really glad I picked it up as this is exactly the type of MG books that I enjoy. A strong storyline, great characters and I really enjoyed the mystery part too. I had a lot of fun reading this book and I hope the author decides to make it a series or write more books like this.

There is some focus on science due to science fair projects they worked on and a lesson they get in class where food comes from. Kids who read this book will probably learn some new things, but it’s smoothly incorporated into the story and everything that happens has a role in the story. It all felt very natural and realistically written, ofcourse the part with how the kids solve everything is a bit unbelievable, but I thought it was handled well and made believable for the most part. The book is very story focused with the focus being on the events and what they would do next. The pace is very steady, with not a dull or rushed moment.

The story focused on two main plot lines namely the science fair that’s at their school soon and the kids work on their science fair projects and besides that there is the mystery concerning the cafeteria food. The mystery was really well done, the kids handled the problem very maturely and when they decided to investigate themselves they made logical steps. The mystery also kept me guessing as I wasn’t sure who or what was behind the bad food. And I really liked how they eventually found out who was behind it and how everything got wrapped up. I also liked how almost everything that happened in the book had a function or played a role or tied into something else eventually, it was very well done.

The book mostly focuses on the three main characters, Willow and her two younger brothers Elon and Linden. The want to build a drone for the science fair and they all have their own role in the project. I liked seeing their relationship with each other and how each of their personalities shone through. There are some fun typically kids scenes like an imaginary lightsaber fight and an imaginary friend. Or how they got excited about the drone they were building. They added an air of authenticity to the characters. Willows was very committed to solving the mystery as one of her best friends got sick, and while her brothers were less invested they still went along and helped her.

Besides the two main character we also meet a few side characters, but they play a less big part in the story. There are two friend sin Willow her class who do another project for the science fair and we see how that turns out. I also liked that we get to see the actual science fair at the end. The only thing that’s a bit weird is how the parents of Willows and her brothers are so okay with what the kids do and we hardly see them, but as the focus of this book is on the kids I didn’t mind too much and it didn’t diminish my enjoyment of the book.

To summarize: I had a lot of fun reading this book! It had an interesting plot that kept my attention, three fun main characters and an exciting mystery for them to solve. I really liked how they solved the mystery and how the actions they took all seemed very logically. The mystery kept me guessing and it all got wrapped up nicely at the end. Ofcourse it is a tad unbelievable the kids solve this mystery, but overall I thought it was realistically written, except for maybe how their parent were a tad too easy going, but that didn’t diminish my enjoyment of this book. I enjoyed the three characters and how they acted and interacted with each other and seeing them try and solve this mystery. All in all this was a fun MG mystery book and I hope the author decides to write more of them!

Have you ever read a MG mystery?

4 responses to “Review: The Case of the Wilted Broccoli by Will Hertling”