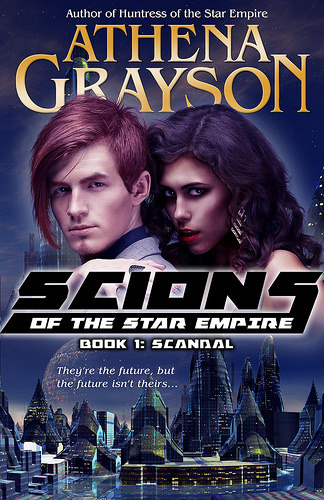 Scandal (Scions of the Star Empire #1)
by Athena Grayson

Blurb:
When a princess who’s no stranger to scandal runs afoul of the secrets of the most powerful cabal on Landfall, even her crown can’t protect her from the consequences.

They have anything they want…except a future.
Nothing infuriates Princess Ione Ra more than having someone else take control of her reputation from her, and her old nemesis–gossip journalist Jaris Pulne–is poised to do just that with pilfered pics of her caught in a compromising position with her power-couple partner. As someone who’s no stranger to manipulating the markets on her own social life, Ione knows the wrong scandal means social suicide.

Privilege is a prison…
For the other half of the power couple, Den Hades, his survival has depended on staying in his powerful father’s shadow in order to protect his secrets. But on the very night of his one chance to earn a shot at becoming a Scion–and freedom from his father’s ambitions, scandal threatens to tear him from Ione, or worse–force them together before their time.

Athena Grayson was on my radar for a while now, but this is the first book by her that I actually read. And I am so glad I did, because this book was so good! I was impressed with the world the author created in this book and once I got through the first few chapters I was engrossed in the story. It was fascinating to see everything play out. The story is quite slow paced, but I mean that in the best possible way. The slow pace really worked here. Every scene gets the attention and detail that it deserves and while most of the book takes place in one night there is enough going on. It was really well written and I hope I can read Athena’s other series soon as well.

I admit that at first I felt a bit lost while I started reading. Scandal is set in the future and there are a lot of words and the way society works that I didn’t understand at first. There is some advanced technology, but that’s actually the easier part. I mostly struggled trying to understand all the societal rules and terms surrounding them. Things like SoCap, the feeds, probabilities, the betting, scion hood, the different houses and how this all tied together and it’s place in society. But slowly I got a grip on the world and things fell into place. By then I could appreciate how impressive Athena handled the world building. There are no info dumps or explanations and while that makes for a confusing start, it was very well written and cleverly done.

Scandal follows the story of Ione and Den. Ione is the daughter of the emperor and Den is the son of a powerful House. Because of the way this society works they have very little control about their lives. they have to follow the expectations society puts on them and at times it feels they are merely pawns in a game, while trying to outsmart the players and trying to achieve their own goals. Marriage is not for love, but for social power and it could very well turn into a prison of sorts. Certain people and houses couldn’t interact with others and there were so many little rules and expectations governing every aspect of their lives.

The way the society and it’s rules was described felt very oppressive, there was very little freedom and there were ruled and customs dictating a lot of things. But it did make for an interesting read with all the people who had their own goals, intrigue and schemes going on everywhere. And while in one sense the people in the higher levels had it better than those who lived in the lower levels, in another sense they had it worse. Because while they had clean air, money and luxury, they didn’t have any freedom.

Most of the chapters are told from the point of view of Ione or Den, with a few chapters from Jaris Pulne’s point of view. There were a few instances where I wasn’t sure at first whose pov we were in until their name got mentioned, but this happened only a few times. The three different point of views really worked great for telling this story. And all three are interesting characters and I enjoyed seeing their side of the story. The book is split up into three parts or episodes. And each episode is split up in chapters again.

I liked getting to know Ione and Den. The main focus is on them and that’s who we get to know the most. But I was also very intrigued by the few parts we got from Jaris Pulne’s point of view as I know there’s more to him and I wouldn’t be surprised if he will play an important part. We just got less of a feel for his personality, then for Ione and Den. I enjoyed reading about them and how they dealt with the pressure society put on them and how they were trying to shape their own future. The secrets they must keep and the steps they make to try and achieve freedom and their own goals. There’s this scene towards the end that really shows Den’s personality and I can’t wait to see how it all plays out in the next book.

Oh and the ending was great. It wasn’t quite a cliffhanger, but it did have that effect. Something big happens at the end and while that scene wraps up and nicely finishes the book, I really want to see the fallout of it. I can’t wait for book 2! I also have all these guesses and speculations that I want to see if they are true or not. And I am so curious how all these things will play out.

The world building in this book was so well done. It’s really impressive how Athena created this world and brought it alive. It was very well thought out not only in terms of technology, but also the society. I loved learning more about this world. And every time I learned something new that only made me want to know more. As the world building is done solely through what the characters think and say and there are every few explanations, your knowledge about the world does grow slowly. And there are so many things that stay unclear, simply because the characters don’t talk or think about it and it’s not directly relevant. But at the same time the way the world building is done shows how well the author knows her universe. And I just want to learn even more about this universe.

To summarize: this was such a great read. Scandal tells the story of an advanced society where the higher social classes are governed by a lot of rules and expectations. It’s pretty oppressive and there’s little freedom, but it made for a fascinating read. There are things going, schemes of other people, the influence of the Trust and how the characters deal with it all. I really enjoyed this book and was absorbed in it. The first few chapters were a tad confusing until I got a bit of a grip on the world and what all the terms meant. The world building is very impressively done, we only learn what the characters think of talk about. But this made for a very natural way to learn about the world, even though that did mean there’s also a lot the reader doesn’t know. But I loved every piece of information we got. Really the whole book is so well written and I really enjoyed it. The ending was very well done, it ended with a big event, but the fallout of it will be in the next book. I am already looking forward to book 2 in this series and hope to read the author’s other series soon too.

How important is well done world building for you in a book?