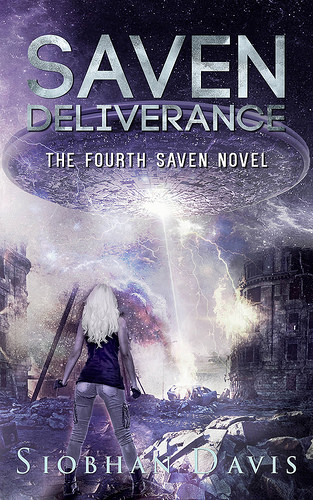 Blurb:
The Truth Will Set Us Free

I’ve been lied to and betrayed my whole life.
Revealing the truth is the only thing that matters.
The truth truly will set us free.

With the political landscape shifting in the galaxy, and the tenuous situation on Earth growing more fraught by the day, Sadie knows time is running out to save mankind. Torn between conflicting agendas, she is forced to make difficult choices that lead to bloody battles and situations she’s not entirely comfortable with.

But this is war, and war means sacrifice.

Ax’s betrayal weighs heavy on her heart and her mind, but it doesn’t override her concern for his welfare. Her desire to protect both the boys she loves is as strong as ever.

Logan has been inaugurated as the new Saven king, but he’s struggling to cope with the pressure of responsibility and the revelation about who Axton is. His people are strongly opposed to Sadie, but she is his forever love and he won’t do anything without her by his side. Faced with impossible obstacles, he is preparing to make the ultimate sacrifice in the name of love.

When the final battle draws near, and it’s time to fight the enemy head on, who will be left standing? And will there be anything left to fight for?

Saven Deliverance is the fourth and final book in the saven series. And while it’s not my favorite book in this series it is a good series ender. My rating for this one is more towards a 3.5 stars and the series as a whole is a solid 4 star. At times the book could feel a bit rushed and it’s feels pretty fast paced and action packed most of the time. I think it did a great job wrapping things up. By the end the most important plot lines are all wrapped up and the epilogue was very well done. This book is full with action, danger, war and more. At times it felt like it was a bit much. There were quite a bit of open ends at the end of book 3 and it felt like they got wrapped up one after another in this book and hardly giving the characters time to calm down a bit. I did like how some of the plot lines got wrapped up, I didn’t like how some of the others got resolved. That’s probably more of a personal opinion and it did feel realistic mostly, I just didn’t quite like all the resolutions.

There are also a few characters that act just a tad unbelievable in this book. Although it did make mostly sense, I think I had just wished things would’ve ended better. Sadie can finally use her Incendio gift and I thought it was a bit overpowered as she can do a lot with her powers and here proceeded to use it a lot. But on the other hand it was nice to see her finally being able to use her gift. We also get a few chapters from Logan his point of view, which was interesting and fit the book. It was nice to get his point of view as well.

Although I wish there was more time for Sadie and Logan to just enjoy each others company. It seemed that there was so much happening in this book, there was no time for things to quiet down now and then. I would’ve liked a bit more sweet scenes to break up the action packed and sadder parts. There is a lot of action, battle, violence and death in this one. It made me a bit sad to see so much blood shed and so many people dying. It was clear Sadie also struggled with this as well. Logan and Sadie their relationship is one of my favorite parts of this book as it was obvious these two care a lot about each other. And Sadie and Logan both are so warm and caring towards each other. It’s beautiful to see how much they care about each other.

The love triangle already got resolved in the previous book, but I have to say again I thought it was resolved well. The fall out of it got nicely wrapped up here. And while I did think Sadie forgave Ax a bit too easily for something he did, it also was written in such a way that I could understand her reasoning. I am happy how it all ended up, but at the same time I wish they had gotten there a bit earlier so we could enjoy that a bit more.

There also is quite a bit of drama in this book and it seemed a bit over the top at times. The stakes are high and there’s quite some emotions coming out and drama cropping up. And then after that it got resolved a bit too easily suddenly. There are also a few world building related things that don’t quite make sense as I would like or get explained well enough to my liking. There are some more political plot lines here as well and it was interesting to see how that developed.

To summarize: while I don’t think this is the best book in the series it did wrap things up well. It is a good ending to the series and I was especially fond of the epilogue. This book is filled with action, adventure, drama and more. At times it felt like there was a bit too much going on as there was hardly space for things to slow down a bit and just enjoy the characters. There is a lot of violence, battle and death in this one, it made me a bit sad to see so much bloodshed. I would’ve liked a bit more happy scenes to break up the sad parts. The romance between Sadie and Logan was one of my favorite parts of the book. A few things seemed to get solved a bit too easily, especially after all the drama and problems it caused first. All in all a good series ender and I would recommend this series to those who like a good YA science fiction romance series as it really is a great series!