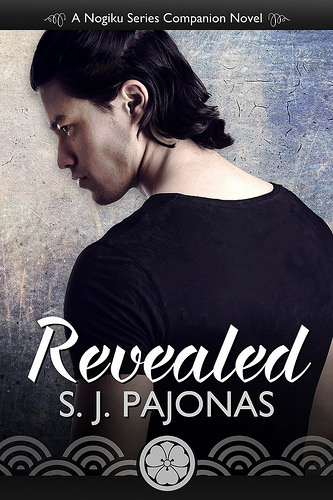 Revealed is a true gift for fans of the Nogiku series. The Nogiku series is one of my favourite series and even though I think it ended in a good place, I also wished for more. And the author gives us that in Revealed. Revealed doesn’t continue the story, but is a companion novel to the first book, although I would recommend to read it after book 4 as I think it works best that way. It’s been a long time since I read the first book in this series and it was fun being able to revisit that time and see scenes from Jiro and Mark their point of view.

Companion novels told from the other point of view can be a bit of a hit or miss for me, but here it most definitely worked. We get both the point of view of Jiro (the love interest) and Mark (another important character in the series). It was great to see scenes we already know from another point of view, but there are also a lot of scenes where Sanaa isn’t and thus we never know that happened as we only get Sanaa her point of view in the first 4 books. I felt that revealed added a lot of details, explained the behaviour of both Jiro and Mark more and gave us a look what was happening at that time where Sanaa wasn’t aware of. So it’s not just showing us another perspective, it also adds a lot to the story. It doesn’t follow the whole first book till the end, but end somewhere else instead, which I think was the right place to end this story.

I loved reading this book and it was so wonderful to be back in the Nogiku world for a little bit. I easily lots track of time while reading this and had a hard time putting this book down. The book is also bittersweet and made me feel emotional as we know what will happen to these characters later on in the series and gah it was so hard to read certain scenes knowing what would happen next. The only small complaint I have is the ending, while I just said I liked the ending, after the ending scene we skip forth a few years and then it takes place after book 4 and it just felt a bit jarring to go form one moment to years later. I did like how that scene made sure the book wrapped up after book 4, the time skip was a bit jarring as you basically have to remember 3 whole books in that time skip.

Jiro and Mark are both two of my favourite characters in this series and I really liked seeing their point of view. I felt like I learned so much more about these characters. I never realized how much mark cared about Sanaa and how busy and conflicted he was at that time. With Jiro I had a hard time getting into his point of view at first. Jiro is so angry all the time and so different from the guy we get to know from Sanaa her point of view. But slowly that changes and I started to really like reading his point of view. And it wasn’t until the end of the book I realized how well it was written as then I realized that Jiro had changed. Sanaa changed him and his life in such a big way, while at the same time it was subtle enough that I didn’t realize it until the end of the book. It was really powerful to realize that and see how much Sanaa means to him and how much her presence in his life changed him. Gah these two are so great together and seeing their romance begin, but now from Jiro hsi point of view was so awesome and made me like them even more. Jiro and Sanaa are one of my favourite fictional couples as they are so perfect for each other. They are honest and open with each other, share things with each other they hide from the rest and they are such a great couple, begin there for the other and so genuinely caring.

To summarize: Revealed is a gift to all the fan of the Nogiku series, it gives us a chance to revisit the events from book 1 Removed and at the same time gives us another point of view and knowledge of what was going on around Sanaa before she knew something was going on. I would recommend to read this book after book 4 as it has the most impact that way and won’t spoil anything. This book is awesome and I loved every second of it, but it’s also so bittersweet knowing where these characters end up. It was hard to read it at times, knowing they change so much and so much happens to them. I loved learning more about both Jiro and Mark. I feel like we got to see a side of Mark we don’t see often in the first 4 books. And seeing Jiro his point of view makes me realize even more how perfect he is for Sanaa and how good she was for him. I am so glad I got the chance to visit the Nogiku world again in this book and it’s a great addition to this series.

Haven’t started this series yet? Grab your copy of the first book Removed for free!
– Goodreads
– Amazon
– B&N
– Kobo