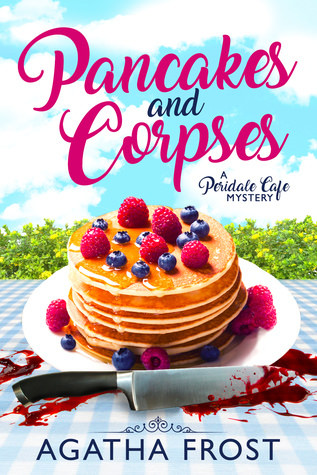 Soon to be divorced Julia South never expected to be caught up in solving a murder, until she discovered the body of her cafe’s most awkward customer. With a new smug Detective Inspector in town who underestimates her every move, Julia makes it her mission to discover the real murderer, before her village friends are dragged into the frame, and more bodies are discovered.

My Review:
This is a promising start of a new series. I found this book by coincidence. I was leaving a review for another cozy I just read add saw this one in the list of “also bought” books on amazon. The pretty cover caught my attention and I decide to give it a try. I am glad I decided to pick this one up, I had some small issues with it, but overall this was just a lot of fun to read and I am eager to continue the series. It fit the kind of read I was in the mood for.

The book follows Julia who recently came back to her hometown and started her own café. I always like reading about characters who own their own business and even better if there’s also food involved. The pace of this book was well done. The focus mostly was on the mystery and I would’ve liked to see a bit more about the café and the characters, but there were a few side plot lines besides the murder. I especially was invested in the side plot line about the thief who steals cakes. It was a nice twist when we figure out who is behind it.

The mystery was pretty well done. At times it felt like I got a lot of clues, but couldn’t piece them together. I also read this one very quickly and didn’t take as much time to try and figure things out. I was surprised when I found out who the murderer was, but looking back I could see some clues pointing in that direction. Some of the clues seemed a bit far fetched though. But overall it was a fun mystery.

I liked how much of the focus was on solving the mystery, although on the other hand I also would’ve liked to see a few more side plot lines. Yes I know I am contradicting myself. There were some nice twists and surprises in how the mystery progressed. One thing that bothered me a bit was how we didn’t get to see one of the final clues. Julia reads something and thinks she figured it out, but we the reader don’t get to know what she read or what she plans to capture the murderer. I am not a fan of that sort of scenes. I did like how in the end everything came to light and we got some more information about it all.

I liked getting to know Julia and some of the other citizens in this small town. I would’ve liked to get to know Julia and some side characters a bit more in depth, but I think that will come eventually in the later books. We get a bit of a feel of some people who live here and I am looking forward to spending more time in this town. I liked the banter between Julia and detective Barker, it was a nice touch and I am thinking there might be a possible romance later on. There was enough description of the town for me to get a bit of a feel for how it looked and form an imagine in my head, although it didn’t come as alive as I hoped.

To summarize: this was a very promising start of a new series. I enjoyed reading this book and quickly read through it. The mystery was well done and I hadn’t figured out who the murderer was. there were some nice twist and background information and some personality things that got uncovered during the investigation. I would’ve liked to get to know the characters a bit better, but I think that might happen in future books. There was a lot of focus on the mystery, which was nice, although at times I would’ve liked to see a bit more focus on the other aspects as well. The story kept my attention and I enjoyed the book. It was a fun read and I am looking forward to the next books in this series.

10 responses to “Review: Pancakes and Corpses by Agatha Frost”