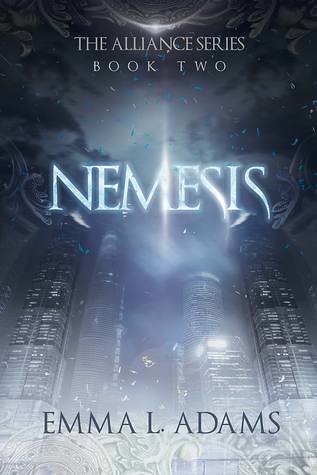 Blurb:
Joining the Alliance might be the key to seeing the worlds she’s always dreamed of, but Ada’s new job causes a rift to form between her and her guardian, Nell. As she struggles to come to terms with the events of the previous month, Ada is reluctant to use magic again after the damage it caused.

Kay, meanwhile, faces his first challenge as one of the Alliance’s offworld Ambassadors – helping his colleague, Markos, investigate the mysterious death of the centaurs’ king back on his homeworld of Aglaia. When they realise magic is involved, Ada is pulled into the investigation. But tensions between humans and centaurs run high, and avoiding a bloodbath will be more difficult than any of them expect. Especially when Kay discovers something about his own magic that could affect the future of the Alliance.

Against an enemy they quite literally can’t see, Ada and Kay must face up to the power that almost destroyed their lives…

I really enjoyed Adamant, the first book in this series and was looking forward to see how the story continues. Nemesis was a nice book, but it fell a bit flat for me in parts. At some parts the story couldn’t hold my attention and other parts were a bit confusing. I felt like it didn’t completely live up to the excitement of the first book. The story takes a bit of a different direction while also keeping the same feel. While Ada and Kay where more on opposite sides in book, now they both work for the alliance, which shifted the dynamics.

Just like the first book there is a sub-plot for this book and it also fits neatly in the overarching plot. At times it felt like all we get is pieces and more pieces of a big puzzle. At first the events seemed random and not connected, even though I suspected they were. There is a death of a centaur king, which requires immediate attention as a war might break out. There are invisible creatures on the loose in another world, which isn’t a big issue, but they doesn’t seem a big issue at first, but the characters keep running into them. Then towards the end things fall on their place and we get a small glimpse of the bigger picture and how the events of book 1 and 2 are connected. I liked that, but I didn’t like waiting till the end of the book for it.

The pace of this book felt a bit slower and there were the two seemingly unrelated incidents where focus kept returning to and no clues how they where connected until later. I also felt like we get most of the clues later one. It’s starting slow and then ending with a big conclusion filled with story, clues and connections. It also felt like the subplot in this book was a bit too similar to the plot in the first book and while it fit I was also a bit disappointing there wasn’t more or something different behind it. It just felt a bit too predictable and similar.

Part of the story and events felt a bit jarring. Parts where going too slow and then Kay was seeing connections and I wasn’t understanding the relevance and then at the end there was too much explanation going on. The two main characters are also clearly the heroes and a few times they are sent on missions or take the initiative themselves, where I felt like they should’ve communicated with the Alliance first or maybe get some back-up. It just felt a bit unrealistic at times as both Kay and Ada are pretty new employees, but they seem to be in the middle of the action.

The story is again told from both Kay and Ada their point of views, which worked great as they both have different stories and are apart more often than together. For the scenes where they are both in, we don’t get recaps form the other pov, we only get the story from one point of view. I did have a bit of trouble knowing who’s pov it was a few times, especially when I stopped in the middle of a chapter as their voices are pretty alike.

One of the things that bothered me in this book were the characters. I had grown to like both of them in the first book, but in this book they were almost hostile towards each other. They hardly interacted and misunderstood things and thought the worst of the other. I had no idea what happened, things seemed to go well between them at the end of the first book and I was hoping their relationship would slowly progress further, but it didn’t, they drifted apart. And at the end of this book I felt like we’re finally back at the level where book 1 left us. It was frustrating to say the least. It just felt like unnecessary drama was added to their relationship.

Ada struggled a bit with things that happened in the previous book, I liked this as it was realistic and it showed she didn’t forget it easily. She needed time to deal with it and I respected that, if only the other characters would as well. Kay is really being nasty about it during one scene and her guardian Nell doesn’t like Ada her new career. I felt a bit sorry for Ada as it seemed al she had left were her brothers. She seemed to have lost a bit of her spark.
Kay also felt different than in the first book, he seemed to think a bit too highly of himself at times, demanding things and speaking to their boss like they were equals. And then when he knows something is going wrong, suddenly he doesn’t explain properly and he rushes into the action himself every time. He was a bit reckless and then at the end was a scene and I didn’t blame Ada for being afraid of him. So it felt like the two main characters I’ve grown to like in the first book had changed a bit too much for my liking, although they are still sparks of the characters I like.

One thing that stayed the same is my love for this world. I was hoping we would get to see more of the multiverse and we did. The story in this book takes place on three different world and then there are the Passages and the magic and we learn more about how it all works. And I was really happy getting to know more about the multiverse. Each world has their own politics and there was a bit on how and why the alliance should be present and it was interesting getting more of a feel for that. There is also bit more about the magic, although that stays pretty vague. I am still liking the whole backlash idea, although I would like to know a bit more about both Kay and Ada and what they can and what their limits are. But overall I am really happy how the world building is handled in this book, we get a few new pieces of info and a few more questions pop up and I am eager to learn more.

To conclude: While still a great book, I didn’t enjoy it as much as the first. I just wasn’t feeling it, the story felt a bit off at times and the beginning was a bit slow with all the action and explanation towards the end. I did love how the books neatly fit together and the plot points are related and fit into the bigger picture, it was well done. I had a bit trouble relating to the characters in this book and while I had expected their romance to pick up in this book, they are almost back to square one with being violent and aggressive towards the other and only at the end things go well between them again. They spent a big portion of this book apart. I did like how Ada was struggling with the event from last book as it felt realistic. She goes through a hard part in this book and I really felt sorry for her, hope things are looking better for her in the next book. I love the world building and magic system in this series and how we learn more in this book. More world, more about the Passages and more about magic and magic stones. All in all a bit of a meh sequel, but kept me interested enough and I will continue the series.

You can add Nemesis to your to-read list on Goodreads

Is connecting to the characters important for you to enjoy a book?