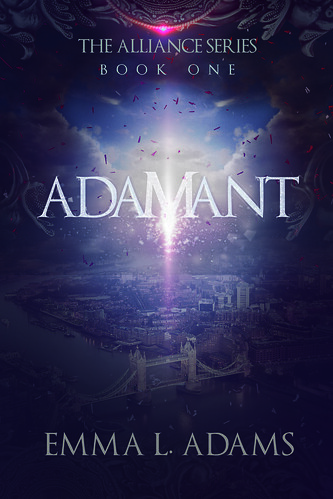 Once I read the blurb from Adamant I knew I had to read this. Adamant is easily my favourite book by this author, even though her other two books are also really good, Adamant is even better. It has magic, some almost sci-fi elements and an interesting story. It also has a rich world and it had me captivated from the start of the book.

Adamant has a fast paced story, with lots of build-up to the big event towards the end of the book when everything falls on it’s place and makes sense.There’s even some murder mystery part going on, with related murders and at the end we find out who the murderer is. There is a plot for this book and most gets resolved at the end, but there are also storylines that are set up for the whole series. Some issues where resolved a bit too easy at times, but the story went smooth and the easy solved things didn’t bother me too much.

This book is told from two different point of views, there’s Kay and Ada. I was a bit confused which gender Kay was at first, but I guessed a boy, which turned out to be right. I liked how the author choose for the dual perspective of telling the story and it worked quite well, at the beginning of each chapter it is announced who’s point of view it is, so I was never confused. Both are great characters, Ada was a bit too confrontational for my liking, but she had a reason to be. There was also some character development over the course of the book. Both characters have a past which continues to interfere with their current lives in a certain way. While I liked both main character there was also a nice cast of side character, I liked Ada her brothers and Markos, but there where also some less likeable characters.

The world building is magical. Even though we only get a hint of what’s out there, I am already in love with this world. There is a multiverse, but while I expected this to be very sci-fi ish with portals and such, it was very down to earth with a passage system connected with tunnels. It’s a rich an interesting world or should I say worlds. The main characters can’t visit a lot of other worlds, so we mostly hear about those, but I am sure we’ll see more of the other world in future books. The world was so interesting and I liked how the author handled the multiverse thing. Oh and the magic thing is great, magic is like a force on it’s own and while some people can do magic it’s not like you control it entirely. And there is a backlash, which I liked, magic use has consequences and costs and they could be seen and felt.

To conclude: I really liked Adamant, the story was fast paced and smooth. Some things where solved a bit too easy, but I enjoyed the story and wanted to keep reading. It is told from two point of views and it really worked and I liked both main characters. The world was rich and interesting and I can’t wait to learn more. The world building and magic system was original and fascinating. An exciting start of a new series and I am looking forward to the future books in this series!

You can add Adamant to your to-read list on Goodreads