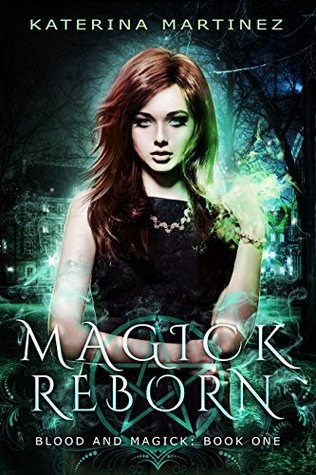 Inspired by fantastic authors such as Karen Marie Morning, Richelle Mead, and Shannon Mayer, Magick Reborn is the first book in Katerina’s brand new Blood and Magick series of urban fantasy novels. Like deep mysteries, plenty of steam in your romance, and watching your heroine become a badass? This is the book for you!

My Review:
Ever had a book that started off on the wrong foot and then when you continued you ended up really enjoying it? That’s what happened with this book. When I picked up this book I read the first 2 chapters and wasn’t impressed. I couldn’t get into the story, it felt like small pieces of explanation were missing, the conversations felt a bit stilted, it all felt a bit jumbled, the world didn’t come alive and I didn’t care about the characters. I decided to give it a few more chapters and I could always DNF it if I still didn’t enjoy it then.

And after that the book improved a lot, the story is the strongest part of the book in my opinion and as soon as the story picked up steam I really started to enjoy this book. The story is very engaging and I found myself wanting to keep reading to see what would happen next. Madison changed her whole life and moved to New Orleans for a new start, but her arrival there sets things in motion. There is a bit of mystery surrounding the house, magick, vampires, what happened in the past and more. It nicely set up the series and when I reached the end I was happy to already have bought book 2 as I definitely plan to continue the series. My rating is more of a 3.5 stars as I did really enjoy the story, but just felt like I didn’t quite enjoy the book as a whole enough to give it a 4 star.

The story definitely was this book it’s strongest aspect in my opinion, the other parts were nice too, but just not as good as the story. For me it was the story that drove this book and that kept my attention. The characters all seemed interesting enough and I liked how there was a bit of doubt about some characters their intentions and some grey area’s. Things weren’t as black and white, which was nice.

I just never fully cared about the characters and would’ve liked a bit more depth, a bit more insight into their personalities. I also would’ve liked to get a bit of a feel for Madison her past, I felt like the story was very focused in the here and now for her and while it was nice to just start the story right when things start happening, I felt like a little bit of build up of information about her past would’ve been a nice. We do get some hints about historical events regarding to the vampires and witches, but I never felt like we got a good feel for Madison and what her life had been up to that point. I guess it’s not really relevant, but I think that’s why the start felt a bit jarring, as I didn’t know what she was moving away from and we don’t really hear much from that.

The story driven approach did seem to carry with it a nice slightly dark and mysterious atmosphere that fit the book. And the cover seems to fit that well. While I didn’t got as much of a visual image of the city as I would’ve liked the focus is pretty much on Madison her house and a big part of the book takes place there. I was able to form a good image of the house, which was nice. I could vividly visualize that house and how everything inside it looked and where the rooms were in relation to each other. Although I am not sure if that was because of the actual descriptions, as I seemed to call up that image as soon as I heard of the house and just filled in the details when the story progressed.

The world building was interesting. I liked how I got a feel for the history of this city and the two races. We get a bit of a feel of what witches and vampires are capable of. But I wanted more. The vampires are pretty much like the typical vampire, so it was easier to get a feel for what they could do. But the magic and witches all seemed to stay a bit unclear. It wasn’t always relevant for the plot, but I just wanted to understand better how it all worked. It is hinted that there are different types of magick, but we never get to hear which ones. And some magick just seems to happen by willing it so, then they have their third eye vision and some magick is more spell like. I just wanted to understand a bit how it all worked as now it felt a bit incoherent at times.

To summarize: When I started this book I wasn’t sure if I was going to enjoy it as the start didn’t quite hook me. It felt a bit off, like some small pieces were missing and the world didn’t come alive. Luckily after the first few chapters things improved and I got into the story. I really enjoyed the story and it was very engaging. It grabbed my attention and kept it and I was curious to see where things would go. But on the other hand I also felt that the characters could’ve used a bit more depth at times, I wanted to get more a feel for their characters and that was difficult at times. The world building also didn’t fully make sense, and while that wasn’t the focus of the book, I just wanted to better understand how it all worked. But despite all the issues, I mostly did enjoy this book and got swept up in the story and wanted to keep reading. And I am curious how things will continue in the next book. If you’re looking for a great story focused read about vampires and witches with a bit of history, mystery and magick mixed in, I would recommend this book

Ever had a book that started off on the wrong foot where you ended up really enjoying it?