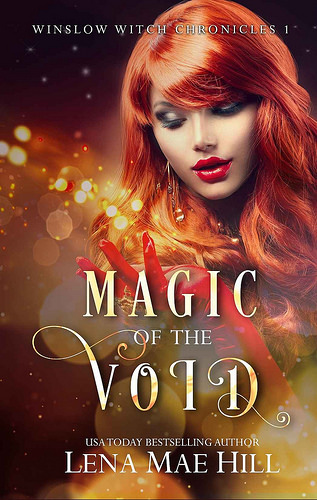 Blurb:
Sagely has no idea that supernatural beings exist, let alone that she’s in danger from a powerful dark warlock. That is, until she’s attacked and mortally wounded. That tips her off pretty quick.

Luckily for her, a sexy warlock from the nearby coven saves her life by transferring some of his magic to her. Not so luckily, the “gifted” magic turns Sagely into a witch herself. The magical powers aren’t bad, and the fact that she gets to choose a collective of supernatural men to protect her has a certain appeal. But being a witch is not all brews and broomsticks. Magic comes with deadly consequences, especially for someone who has just a *bit* of trouble controlling her impulses.

Just when Sagely gets a handle on her magic, the unthinkable happens. The coven discovers the legendary art of void magic locked inside Sagely. And suddenly, every supernatural creature in the world wants a piece of her.

***This is a slow-burn Reverse Harem series where the men are introduced throughout the series (5 books), not all at once. These are FULL-LENGTH novels, suitable for ages 16+.

My Review:
When I first heard of this book I knew I wanted to read it, it has a great cover and it just sounded so fun. Once it released I bought my copy and dived in soon afterward. Magic of the Void was a fun read. Once I started I wanted to keep reading and while I had a bunch of small issues with this book as well, for the most part I really enjoyed it and am looking forward to the next book. It had an addictive feel and plot was well written and well paced.

Magic of the Void follows the story of Sagely, who gets attacked one night and someone saves her. After which she becomes a witch because of the magic this guy gave her to save her life. She then gets introduced to the world of the paranormal, learns how to become a witch and discovers she has void magic. And there’s more going on as well. The pace and plot was really well done and it kept my attention.

This book was alternating very refreshing and unique and other times it was full of clichés and I couldn’t help roll my eyes at times. It was a weird combination. There were parts that read very well and other parts that read a bit less smoothly. It took me a while to get used to the author’s writing style, but once I got used to that, reading went smoother. The story was very addictive and compelling and I just wanted to know what would happen next.

Another issue I had was how especially at the start it felt at times like small pieces of information were missing that would have things read more smoothly. It wasn’t really confusing, but more like it felt that these little points of information or explanations were missing that would’ve made it all make more sense. As the book progressed this happened less often, but still now and then. I also felt that the characters and side characters resorted a bit too often to violence, while a simple talk could’ve easily resolved things. There also was a scene with violence toward the animal familiars, which made me a bit uncomfortable.

Sagely was a nice enough main character, although I never full connected with her. My main issue with her is that I never full felt like we got into her head and emotions as much as I would like. There is this scene she does something shocking and it id described so dry and off. It was hard to get a handle on what she was feeling at times and she could feel a bit cold because of that at times. There were also some moments were her actions got on my nerves a bit, like at the start when she has no control over her magic yet and puts herself in danger twice in a row.

My other issue was that the whole strong independent female character characteristic was a tad overdone in her personality. It was almost like she was too afraid to be seen as weak and I personally didn’t like how far she went in that, fending off comfort and endangering herself multiple times because she insisted on doing something a certain way. But there were also parts about her that I liked, like how she was a bit surprised at how the witches handled everything, but also open minded. Like the whole collective thing for example. At first she seemed to find it a bit strange, but eventually she did seem to grow a bit more open toward the idea.

We meet quite some side characters in this book, but I had could easily remember who was who most of the time. Which was done well as each character had their own quirks or characteristics with which I could remember them. On the other hand the large cast of characters did make it hard to really get to know them. There were some characters that acted pretty immature at first, which annoyed me, especially when they almost revealed magic to the whole world because of some bickering. There were also some decisions that didn’t quite see wise or where the character reacted a bit too hot headed. But there are also some interesting side characters that I hope to read more of.

There is a bit of romance as well, I liked the balance between the romance and plot. While the romance was important, the focus did stay on the plot and I felt like that worked well in this novel. I liked Quill well enough, although I never fully felt the romance between him and Sagely. There was a time skip in the book at some point and I felt like their romance and magic knowledge progressed int hat time, but the reader isn’t aware of what exactly happened there.

This book is one of my first ventures into the Reverse Harem genre. I thought it was a good introduction to the genre, with the focus on the plot, but an important romance side plot. And for the most part of this book Sagely only has one love interest. I guessed correctly who the second member of her collective would be and at the end of the book she has two people in her collective. I am curious to see how that will develop in book 2, especially because of the direction the book took toward the end. I have the feeling we’re going to see more of her second guy in book 2 and I am looking forward to get to know him a bit better and see how this whole collective thing works.

The world building was well done. I liked the more unique touches like the void magic and the school were the students trained. Although I had hoped to learn a bit more about the magic. At the end I still felt like I new very little about how it all worked. We also get a hint of what more is out there in the world, but the focus mostly stays on the witches and I hope we get to see more of the other supernatural types in future books.

To summarize: Magic of the Void was a fun and enjoyable book and once I started I wanted to keep reading. The plot is at times very refreshing and cliché at other points, but the story is compelling and kept my attention. I had a bunch of smaller issues with the book that prevented me from fully enjoying it, like some character actions, some cliché parts or scenes and how at times it felt like I missed these small bits of information that would make the story flow better. I liked Sagely well enough, although I found that she went a bit too far with the whole strong and independent characteristic at times. Quill was a nice enough character, but I never fully felt their romance. I liked how the reverse harem aspect was handled and hope to see more of how the second guy and how the whole collective thing works in book 2. The world building was done well, although I felt like I still knew little of how the magic worked and I hope to learn more about the world in book 2. But despite some of the issues I had, overall it was still a great read and I had fun reading this one. I have to admit I am curious about book 2 and plan to continue the series.

Have you read a reverse harem book?

12 responses to “Review: Magic of the Void by Lena Mae Hill”