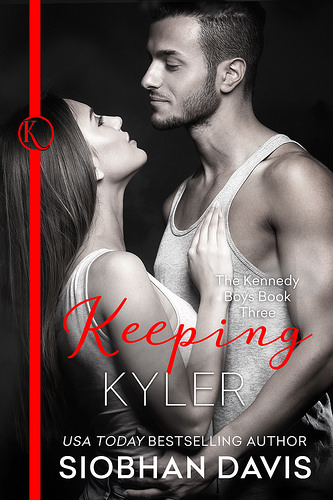 Nothing or no one will keep them apart…

Kyler Kennedy is in the wind.

Shocked and upset, he has taken off on a solo mission—to track down his mom’s ex and demand answers.

Faye understands what it’s like to have your world turned upside down. Determined to support her boyfriend, she gives chase. Yet nothing could prepare her for the ugly truth. Ky has always been plagued with inner demons, and as he falls apart, Faye finally discovers what he’s been hiding from her—from everyone.

When serious accusations arise, Kyler’s future hangs in the balance. But Kennedys stick together in times of crisis, and they rally around him now.

At least there is nothing to prevent Faye and Ky from being together. They go public with their relationship, but not everyone is thrilled for them. Enemies reappear, and battle lines are drawn, but Faye is ready to fight back.

No one is taking her new family from her.

Especially not a manipulative ex.

With time running out for Kyler, Faye takes matters into her own hands.

But when you play with fire, you risk getting burned.

Please note this series is only suitable for readers age 17+ due to mature content and themes. The first three books in this series must be read together but, thereafter, every book will work as a standalone with an HEA and no cliff hanger.

Keeping Kyler wraps up the story of Ky and Faye and while this ends their trilogy, I am so happy to know the other boys will get their own book as well, so the series will continue after this book. All the side characters are so interesting and real and I am looking forward to getting to know everyone even better as the series progresses.

The ending was just perfect! It made me happy and glad about where Faye and Ky are. Those two are just so good for each other and after everything they’ve been through, it’s so good to see them working through everything, be there for each other and enjoy time together. I really liked the epilogue, it made me feel happy for these two.

Overall I enjoyed the first two books a bit more than this one, not 100% sure why. Part of it could be my weird reading mood of late and part was how this book has a slightly different focus than the first two books. The first two books are filled with drama, while I felt that this book tones that down a bit. Which did fit the plot. It’s more focused on wrapping up the last few threads and there are some important things that happen here and secrets that come to light, but the tone of the story was just a tad different than before. Which also is a good thing on one hand as I did enjoy how we got to see more of Faye and Ky together and it felt like they got a few breaks this book to be together, which I enjoyed reading about.

There was also a plot line I didn’t quite care about and a scene towards the end that resolved that plot line that I didn’t enjoy as much. But in the end I was satisfied with how everything got resolved. I just felt like certain characters just went a bit too far and the repeated scenes where something happens to Ky just got a bit old after the first time it happened and I felt like that part and the plot line with Addison just dragged on a bit too long. I was pleasantly surprised by one of Addison’s actions towards the end and even felt a bit bad for her.

Besides the parts I enjoyed a bit less, this book is mostly a very enjoyable book. It grabbed my attention and kept it. There is another big secret that gets revealed at the end of book 2 and this book deals with Kyler trying to wrap his head around that. A few more secrets come to light, but in part there’s also a lot of dealing and moving forward for everyone in this family. And it was amazing to see how they got through this all.

While the focus is on Kyler and Faye, I liked getting to know all the side characters and the epilogue of this book sets the stage for Kalvin’s book and I can’t wait to read that one! I really like how we get to see a bit of all the other Kennedy family members as well and get to know them. They all seem to have their own issues to deal with and we get these little hints of what’s going on with everyone and I just want to know more about all of them!

As far as the romance goes, this book was an important next step in Kyler and Faye their romance and I loved seeing them grow closer in this book and their love for each other was obvious. There are a lot of sweet and romantic scenes between them in this book. And I really enjoyed reading about them together. I did agree with Kent though that sometimes they overdid the PDA’s a bit. They literally can’t keep their hands of each other and sometimes it was a bit much? But it fit their characters and was in-character, so I didn’t mind too much. There’s also a lot more sexy times in this book and mentions of sex than in the previous books. It can be a bit much at times, but like I said before it fits their characters and makes sense given what they went through.

To summarize: Keeping Kyler wrapped up Faye and Kyler’s story perfectly! The epilogue was so perfect and you could really feel their love for each other. There was a storyline in this book I didn’t care as much for and the tone of this book was a tad differently. Which was a good thing, but it did feel a bit different from the first two books because of that. There is a bit less drama in this book, but there are some big secrets that come to light and I liked seeing how everyone dealt with what happened. the side characters in this series are great and I am looking forward to reading the stories for each of the Kennedy boys! Kyler and Faye their romance was great to read about and it was nice to see them being more together in this book and helping each other deal with everything. There was one point of conflict that got removed, which I thought was a shame and I would’ve liked to see them deal with it. There were a bit more sexy times than in the previous books and while it could be a bit much at times it did fit the characters. All in all in another great read by Siobhan Davis and I am really looking forward to the rest of this series!

Do you like romance series where different family members get their own book?