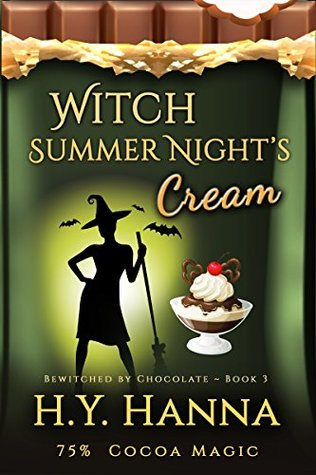 Blurb:
,em>A witch, a kitty and a chocolate love potion…

Celebrating the summer solstice can be fun – especially when your grandmother is a witch with an enchanted chocolate shop! Caitlyn is looking forward to Midsummer’s Eve in the tiny English village of Tillyhenge. But when a teenage girl is murdered and a priceless love potion goes missing, she and her cousins are plunged into a puzzling mystery.

Is the girl’s death connected to the midnight bonfires at the ancient stone circle? What about the two strangers who recently arrived in the village? With her naughty black kitten and toothless old vampire uncle (not to mention handsome British aristocrat, Lord James Fitzroy!) all lending a helping hand, Caitlyn sets out to do some magical sleuthing.

But Midsummer’s Eve is fast approaching and spells are going disastrously wrong… can Caitlyn use her newfound witch powers to find the killer – and maybe even mend a broken heart?

WARNING: May contain traces of “Hahaha!”

This was exactly the type of book I was in the mood for! It felt like I flew through this book, as I was enjoying it so much. And now I wish the next book was already here, because I want more! I am really enjoying this series so far and this book was so good! I always know I am in for a great read when I start one of HY Hanna’s books. I love how she mingles the mystery plot lines with the paranormal and other side plot lines in this series. Each book has it’s own mystery that gets wrapped up by the end and some side plot lines as well, but there are also plot lines that span the whole series so far.

The mystery was a good one. I was pretty stumped at first, none of the suspects seemed right to me and then a small sentence from someone suddenly made me realize who the murderer was with almost 100% certainty. It turned out I was correct and I felt pretty pleased about that. I enjoyed reading about how Caitlyn pierced it together eventually. I did think it was a good mystery with enough of those small clues that you could figure it your yourself. I always like that in a mystery book, when it is possible to figure out the mystery.

Besides the murder plot line we have the sprinkles of paranormal throughout the story. I think the paranormal part is very well done. It adds to some fun scenes and it’s present without being too overwhelming. Caitlyn learns a bit more about magic in each book. As the title suggest there’s a bit of a connection to a mid summer night’s dream. I haven’t ever read the story so I didn’t really get the references, but luckily it was pretty minimal. There’s also a bit more about the stone circle and a magical scene at the end of the book.

I like reading about Caitlyn, although sometimes she can a be a bit bossy and she can jump to conclusions at times. She determines who the murderer must be and tries to focus the police to look that way. But mostly I really like her, she gets herself in some trouble and fun situations and I like how curious and caring she can be.

There’s also a fun side plot line involving a herd of cows and the bull Ferdinand. From the first scene involving them I knew how that plot line would be resolved, but it was still fun to see it all play out. We also have the romance between James and Caitlyn progress a bit, with that last scene of the book I have high hopes for them. And I wonder if we’ll hear more about those horses from one of the later scenes in later books. There are some new characters and we see more of already familiar characters.

To summarize: if you enjoy a good cozy mystery with a sprinkle of magic I can’t recommend this series enough! HY Hanna really knows how to write a good mystery series and it felt like I flew through this book because I enjoyed it so much! The mystery was a good one, although after a small hint I was suddenly sure who the murderer was. But it was still fun to see Caitlyn figure it out and piece everything together. The paranormal aspects is well done as usual and leads to some fun scenes. There are also some side plot lines like one about some cows and some plot lines from previous books that progress a bit. We learn a bit more about the stone circle and the romance between Caitlyn and James seems to move forward a tad. I really enjoyed this book and I can’t wait for the next book in this series!

What’s the last book with a fun animal side character you read?