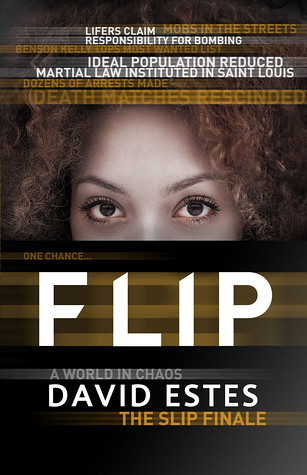 Blurb:
In a scared and broken world where someone must die before another can be born, one family has been torn apart by fate and a ruthless government, only to find themselves suddenly thrust back together with one chance to save their struggling nation.

Benson and Harrison Kelly and their newfound allies within the rebel consortium are finally fighting back, but the Department of Population Control and its ultimate weapon, known as the Destroyer, won’t rest until they’re all dead. The task will take them into the belly of the beast and force them to face a secret about their past that will change everything.

Meanwhile, the leader of the Lifers, Jarrod, has a new weapon, in the form of an angry, desperate twelve-year-old boy, and he won’t hesitate to use him to destroy an entire city as part of a hidden agenda only just starting to be revealed.

The fate of humanity hinges on a series of impossible choices made by those with nothing to lose. One family. One chance to flip everything they know on its head. One action-packed finale that will leave you breathless.

Before I started Flip I have to admit I was a bit hesitant I thought Grip was a great book, but it also had been a hard book and I knew this book was going to be dark as well and the characters would have to get through some more hardship before the ending. My expectations turned out to be right, but I didn’t expect the ending to be so beautiful and maybe it was even better because of how hard the journey was to get there. It was totally worth it and I really enjoyed this book. It’s the perfect ending to this trilogy and I think this is David his best series yet, although it’s also dark and depressing at times, it’s really well written and worth it in the end.

Flip mostly deals with the build-up to the event at the end of the book, there was a lot of anticipation and build-up, but the characters certainly don’t sit still. This book aligned all the pieces in the right way, tied of the loose ends and showed us some great scenes along the way and then when the I got at the ending I just had to keep reading, because I had to know what would happen next and how would make it out alive. I am not going to spoil more, but I was really happy with the ending.

Beside the story there is also a lot of focus on the characters and interpersonal relationships, there are a lot of changes and it was amazing to see. We have Harrison and Benson who are mostly together in this book and they are getting used to being brothers and it’s so amazing seeing them become a family and there’s Janice, who might seem crazy, but she says the smartest things sometimes. And almost everything that came out of her mouth in this book was quote worthy and even though she seems weird, it’s perfect and how she fits into it all. The Kelly family is one of the best things about this book and it’s great seeing them together and trying to be a family even though everything that happened that tried to tear them apart.

Then there’s Destiny, she still has a long way to go in this book after the aftermath of the previous books and I liked the characters development in this book. There are also some chapters from the characters who are still stuck with the lifers, although just enough to keep up to date with their plans and what’s going on. I also came to like Minda and Simon even more in this book and we learn more about both of them, there’s this interesting titbit of info about Simon’s past that we learn, that really surprised me. And then there’s Lola the Botdog, she might be one of my favourite characters in this book. That botdog is amazing and there’s this quote towards the end of the book that applies to her that was so touching and spot on. I want a botdog! There are some scenes where she plays an important part and I liked reading about her.

This series is very consistent in the amount of world building provided in each book, every books ads a bit and even though this is the last book, there are still things added, things that get into place, pieces of the puzzle that we only get now. And then there’s ofcourse the botdog which we haven’t seen much about up till now. And the cyborg and how it ties into everything. So even in terms of world building this book added a lot.

To conclude: I really enjoyed this book, it was hard to read in a few parts, but I loved the ending, it was perfect! There’s a lot that happens in this book and it was exacting seeing things line up for that final event that would decide everything. There is still a lot of character growth and change in this book and the characters are certainly one of the highlights of this book. In terms of world building some bits and pieces are added as well, making it complete. All in all a great ending to the trilogy!

You can add Flip to your to-read list on Goodreads

You can buy Flip here:
– Amazon

How important do you think a series ending is? Can it change how you feel about the series as a whole?