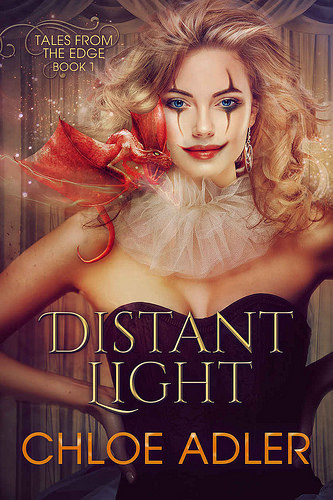 Distant Light (Tales From the Edge #1)
by Chloe Adler

Blurb:
Iphigenia Holt is a good little witch who grew up under the thumb of a wicked mother and two powerful sisters. Pegged as a caretaker, Iphi hides a secret that would change the way everyone around her views her: she’s an empath. And yet she doesn’t let that stand in her way. A soaring circus performer with a fierce love for animals and the downtrodden, Iphi tumbles her way through life, hiding the hurt just being around others can inflict…

…Until she meets an enigmatic vampire and his three hot shapeshifting cousins. Drawn to the brightness she shines into their lives, each man promises to transport Iphi from the monotony of her life into a world truly filled with magic. They offer her love, protection—and an unconventional arrangement that will make her the scandal of Distant Edge.

But when a rogue vampire attacks Iphi, it’s time for the men to step up and for Iphi to fight back the only way she knows how: with love, compassion, and her inner radiance. If love can’t conquer evil, her four protectors are more than willing to bare tooth and claw at her side—whether she’ll have them or not.

A paranormal, urban fantasy reverse harem series. This is book 1 out of 3 in the Tales From the Edge Series.

My Review:
I received a free copy through Booksprout and voluntarily reviewed it.

Distant Light sounded interesting and I am glad I got the chance to read it. It’s a reverse harem paranormal romance story set in the Edge universe. There’s a bit of danger, some family drama, relationship dynamics and some fun side characters. It kept my attention and I enjoyed the book for the most part.

One of my favorite parts of this book was the main character Iphi, she’s such a nice character who always sees the best in people and I liked that about her. I liked how she wanted to help others were she could. Although she did take that a bit too far at times, living under the oppressive thumb or her mother and almost losing herself in the process. I liked seeing her change a bit throughout the book.

The romance part was well done. I liked how she got to know these four men and how each of them had their own personality. Although I had hoped to get to know a bit better, I do think each of them was different enough and was able to form an image of all of them. It did feel a bit like they fell into one clear characteristics, the creative type, the strong and bulky one and the psychologist. It was a tad overdone, but at the same time it did make it easy to remember who was who. The one I felt we got to know the least is actually Rhys, he just seemed a bit bland to me.

The reverse harem aspect was well done. I liked how Iphi had her doubts and felt a bit weird when she started to have feelings for two of them and then more and wasn’t sure how to handle things at first. That felt realistic. The reverse harem part was done differently than in the reverse harem novels I read so far. Instead of meeting one guy at a time, she meets them all at once and the guys already know each other and are brothers. It did weirded me out a bit that they were all brothers and knew their brothers all liked the same girl, but it was nice to see they already had such a close bond to each other.

I also liked how we got some parts from the guys point of views as well. The focus is on Iphi, but each man has some parts from his point of view. And I felt that this also helped to get to know them a bit better and it was interesting to hear their thoughts as well. It also was nice how she had some scenes with each man alone as well. I liked seeing how she interacted with everyone individually and as a group or anything in between. There are two sex scenes toward the end of the book and I liked it took them a while to get to that stage. Although it still felt as little bit fast when I think of how everything happens over a few days.

What I didn’t care for was their alpha behavior and while I understood they wanted to protect her it quickly turned into one of those conversations where the men are being all alpha and saying she needs protection and they want to watch over her, with her insisting she can take care of herself and wants her independence. I just didn’t care for that and it bothered me Iphi was so stubborn at that point and that the men were so annoying and didn’t even tell her the whole truth. Maybe if they told her everything in a calm way instead of going all alpha males on her she would’ve understood their concern better.

There were some fun side characters, although it did feel like they all had their own story already. Like with later books in some of those romance series were each book features a different characters. When I looked up the author’s other series it seems that series features some of the side characters we met here. And I kinda wished I had started there. Tough this book can easily be read as a standalone I like to read things in order they happen.

Besides the romance there is a bit about Iphi’s job, she performs at the circus and teaches lessons during off season. I thought it was a nice addition and gave some more flavor to her character. There’s also a plot line about a rogue vampire that’s on the lose. The men know more about this, but we don’t get to know what they know about it, only that they’re not telling Iphi what they know. I didn’t really care about the rogue vampire plot line. It sort of felt added to the book and like it didn’t quite blend well and fit in there. I also didn’t really care about the cliffhanger. I normally don’t mind them, but the cutting of a scene in the middle to create a cliffhanger just feels artificial to me.

I liked the part of the world building we got to know about. This is another aspect where you notice the author already created this world before this is there is very little world building, but what we get to know feels very natural like the author knows exactly how everything works, which was nice. And throughout the book I did get a good feel for how things work. The paranormal aspect is subtle, but at the same time it’s part of everything and nicely woven throughout the story.

To summarize: I enjoyed reading this book. Iphi was a great main character and I liked how kind and caring she was, seeing the best in people and wanting to help if possible. The romance was well done too and I liked how we got to know each of the men a bit. They did seemed a bit centered around one characteristic, but that did make it easy to remember who was who. Rhys was my least favorite as it felt like he stayed a bit bland, while the others had more personality in my opinion. It also was nice how we got some parts from each of the men’s point of views too. I wasn’t too happy they didn’t tell Iphi the full truth and went al alpha male and insisting they had to protect her on her, but also didn’t care for how Iphi was super insistent she could handle herself. There are some other things going on as well besides the romance, I liked the circus scenes, but didn’t really care for the rogue vampire plot line. The ending is a cliffhanger in the middle of a scene. All in all I did enjoy this book and learning about this world the author has created.

What’s the last book you read that had a very kind main character?