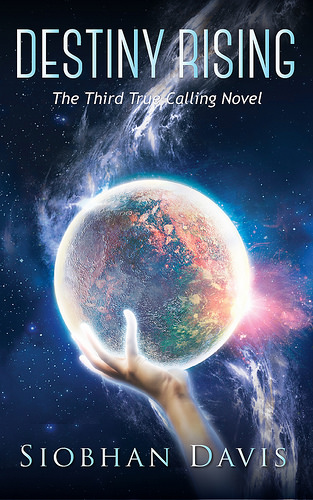 I was really excited for this book, especially after how the the second book ended and how this book had to wrap everything up. I had a lot of expectations, but this book proved to be even better than I expected. This is without a doubt the best book this author has written so far, I loved it from the start till the end. The start of this book was brilliant, starting with some big revelations. I had predicted one of them, but was blown away by the other one. It was amazing to start a book like this, fast paced in the middle of all the drama. And it didn’t slow down after that, keeping up a steady pace. What I like most about the revelations is that looking back you can see the hints Siobhan planted and everything just fits into place, it makes sense and I loved that. I’ll definitely will re-read the whole trilogy eventually to appreciate the foreshadowing even more.

From the moment I started this book I just wanted to keep reading. I spend quite some evenings going to bed later than planned as I stayed up longer reading this book. It was just so well written and there was so much going on. The story was very interesting and it kept my attention, there were no slow parts. Although there were a few military/ war scenes I liked less as I don’t like reading about that. So many people die and don’t make it and it was heart wrenching reading about it. I did like that the story wasn’t only focussed on the battle, it also focussed on the technological battle and there are also big parts that are more about the characters, personal changes and even a few really happy and uplifting scenes. It was really a mix of emotions.

This book was an emotional rollercoaster, from sadness, apprehension, to being scared, to being happy. This book evoked so many different emotions in me and at one point I was almost in tears and that’s saying a lot as I have a really good book poker face and it hardly ever happens that a book evokes really strong emotions in me. And then there was the ending, wow it was so powerful and such a good ending. So perfect and at the same time being happy, but also realistic and bittersweet at times. It is a war and not everyone makes it, which is sad, but the ending makes it all worth it. I loved the epilogue!

I LOVE how Siobhan Davis handled the love triangle. I always disliked love triangles as they are never written right, but this series shows how a love triangle can be done right. Yes there is a lot of drama surrounding it, but there is a real conflict and both boys stand a chance. They are both great characters and they both love Ari and Ari loves both of them and you can really feel that. I honesty didn’t know who I wanted to win, but the author handled it perfectly. The love triangle got resolved before the end of the book, it got resolved way earlier in the book than I expected. And then Ari makes her decision and stays with, I loved this and how we didn’t have to wait the whole book for the decision. The great thing about this is that we got to see what happened after her decision and how it impacted and changed things. We get both Ari, Cal and Zane their point of view so we get both boys point of view to see how they deal with Ari her decision. And it was just handled so well and it just all worked out nicely. I was really happy and satisfied with how the love triangle was handled and Ari her decision. It also was a nice addition to get all three their point of views this book.

The characters really grow and mature a lot, it happens gradually over the course of the book and it was so powerful to see. Especially Ari, she grows, matures and changes so much and I loved seeing her develop and come into herself and her psychic powers. There are some awesome scenes involving her psychic powers and wow I think I was as impressed as the characters in the book. Then there is how she early on makes a decision about why she wants to spend her life with and she never wavers from it. I loved the person she becomes in this book. Cal and Zane also change, but that’s more later in the book when we see how they deal with Ari her decision.

We also get to learn a bit more about a few of the side characters in this book as a big part takes place at the base all characters are in close proximity and they form an even closer group than in the previous books. I especially liked how we saw more about Mel, Ruby and Cal’s dad. We still see Ari her sister and brother as well, even though they play a small part, they are still present. There are also a few characters that make an appearance again, which I hadn’t expected. I did feel that the characterisation in this book was done even better than in the previous books or maybe that’s because we now know them longer, but I was better able to get an image and idea of the side characters as well. Their group is also a bit smaller and we have knows the characters longer which was why they were easy to recognize and remember.

In terms of world building, there isn’t much new added, but build upon and expanded on the blocks that are already there. We do learn more about the revolutionary organisation, which was interesting. And we found out the true extend of Ari her powers, I love that small paranormal aspect. It is subtle and there isn’t really an explanation about it, but it worked really well, I never felt like more explanation was necessary as I was fine with it staying a bit mysterious. We also get a glimpse of the future in the epilogue, which was awesome. I like seeing how things go after the big battle has taken place and how the future will be for all the characters I’ve grown to love.

To conclude: I loved this book from the start to the end. The start of this book is brilliant and the ending is perfect. There are so many emotions I felt while reading this and I was close to tears at the end. I especially love how Siobhan handled the love triangle, resolving it early in the book and in a very satisfactory way. This is the best love triangle I’ve read so far. Ari makes her decision in this book and stays with. The three main character grow and mature a lot in this book and it was amazing to see. We also learn more about the side characters, the revolutionary organisation and Ari her psychic powers. All in all this was the perfect ending to this trilogy and I can’t wait to read whatever Siobhan writes next.

Do you like epilogues? And what makes a well written epilogue?