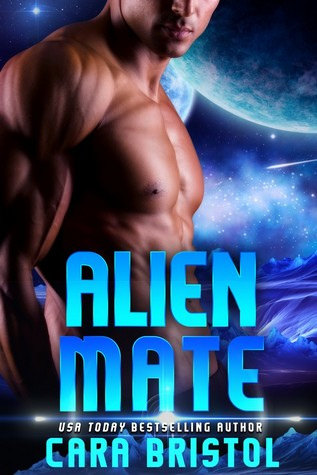 Blurb:
I’m Starr Elizabeth Conner. Earth’s government falsely convicted me of a crime, packed me on a ship with other female felons, and sent us to Dakon, a primitive, frozen wasteland of a planet. Why? Earth needs minerals, and Dakon is desperate for females.

I am Torg. I have waited 34 rotations for a mate of my own. With this shipment, I was sure to get a fine, sturdy mate who’ll bear me many daughters. Instead, I receive a small, curvy, pale-haired female who looks at me with anger and fear.

It is only when we ‘kiss’ that I believe things may work out between us. But I’m hearing rumors that Starr and her shipmates are law-breakers. To survive, Dakonians must obey all laws … or be exiled into the frozen wasteland. Just when I have found her, will I have to send my mate to die?

My Review:
I received a free copy of this book from the author through netgalley.

This book was such a fun read! I had read one of Care Bristol her short stories in the anthology Pets in Space and had been planning to pick up one of her full length books, so when I saw this one on netgalley I couldn’t resist requesting it. Alien Mate is basically a mail-order bride plot line set in space. Terran decided to solve one of their problems and gain some valuable mineral they need. They sent some convicted females to Dakon who had a female shortage and gain the mineral in exchange.

I really liked the concept for this one, it made for a fun set-up for a story and I enjoyed seeing how things played out. From the first chapter it grabbed my attention and I just wanted to keep reading. It’s an enjoyable read, well written and paced nicely. There is a bit of mystery surrounding Starr’s past, what she has done and why she’s sent to Dakon, while the others had a choice in the matter. Then there is a good romance between Star and Torg. Getting to know an alien planet and there are a few interesting plot twists at the end as well.

Starr and Torg literally come from different worlds, but when they meet sparks fly. Their romance develops quickly, but I didn’t mind. I could feel their connection and chemistry and given the situation I thought things progressed believable, although I did think Starr changed her mind a bit quickly. The romance is very low on drama and conflict, which fit the kind of read I was in the mood for. You could say things got resolved a bit quickly, but I thought it was refreshing not to have things blown out of proportion and the characters actually talked things through after their initial reaction.

Starr and Torg were so fun together. I liked reading about them getting to know the other and learning about the other their planet and customs. There’s a fun misunderstanding at first when Torg doesn’t understand the wording of something Starr says and a few differences between their cultures that cause some funny situations.

While the focus is on the romance, I did like that the author also spend some time building the world of Dakon and how she gave the reader a feel for the planet and it’s people. There’s still some things left open, but I am hoping this might become a series as I would love to read more books in this universe. I could visualize the planet Dakon well and I enjoyed learning a bit about how they lived and what caused their current situation. I only was a bit mixed about the direction things took at the end. Not sure why, but it didn’t set quite well with me. I do understand it was a good change for them, but at the same time it felt like it changed their whole way of living.

To summarize: This was a fun read that grabbed my attention from page one. It’s well written and nicely paced. I enjoyed reading about Starr and Torg. They have chemistry and while their romance developed a bit quickly I didn’t mind too much as I could feel their connection and how much they cared about each other. There are quite some hot scenes, but very little drama and conflict. There are some fun situation caused by cultural differences or misunderstandings which were fun to read. And I like how the author took a bit of time to describe the planet Dakon and give us a feel for it’s people. I had a lot of fun reading this one and plan to pick up more of Cara Bristol’s books in the future. I would recommend this book if you’re looking for a fun and hot alien sci-fi romance book.