Ruthless (Debt Collector #8) by Susan Kaye Quinn Blurb from Goodreads: Ruthless- EPISODE 8 of the Debt Collector serial What’s your life worth on the open market? A debt collector can tell you precisely. With Elena’s help, Lirium attempts to slash into Candy’s files to get evidence about the conspiracy to transfer out kids. Ruthless is approximately 14,000 words or 56 pages, and is the eighth of nine episodes in the first season of The Debt Collector serial. This dark and gritty future-noir is about a world where your life-worth is tabulated on the open market and going into debt […] 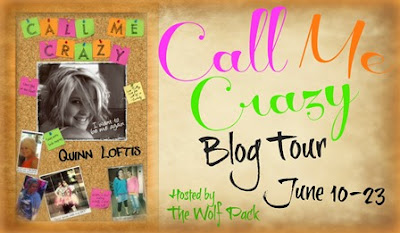 Today I am part of the blog tour for Call Me Crazy! I was lucky enough to get an ARC of this amazing book and I am going to share my review with you today! And don’t forget to scroll down for the tour wide giveaway! Call Me Crazy by Quinn Loftis I got a copy in exchange for an honest review Blurb from Goodreads: “I’m looking out from inside the chaos. It must be a one-way mirror because no one seems to be able to see back inside to where I am. The looks on their faces, the judgment […]

Easy by Tammara Webber Blurb from Goodreads: When Jacqueline follows her longtime boyfriend to the college of his choice, the last thing she expects is a breakup two months into sophomore year. After two weeks in shock, she wakes up to her new reality: she’s single, attending a state university instead of a music conservatory, ignored by her former circle of friends, and failing a class for the first time in her life. Leaving a party alone, Jacqueline is assaulted by her ex’s frat brother. Rescued by a stranger who seems to be in the right place at the right […]

Promise (Debt Collector #7)  by Susan Kaye Quinn Blurb from Goodreads: Promise- EPISODE 7 of the Debt Collector serial What’s your life worth on the open market? A debt collector can tell you precisely. Lirium tries to keep his promise to Madam A to do transfers for her kids, but he is afraid Kolek will go after his mom. Promise is approximately 15,000 words or 60 pages, and is the seventh of nine episodes in the first season of The Debt Collector serial. This dark and gritty future-noir is about a world where your life-worth is tabulated on the open […]

Spartan Frost (Mythos Academy #4.5) by Jennifer Estep Blurb: I’m Logan Quinn, the deadliest Spartan warrior at Mythos Academy. At least I was — until the day I almost killed Gwen Frost. Professor Metis and Nickamedes say that I’m fine, that Loki and the Reapers don’t have a hold on me anymore, but I can’t risk it. I can’t risk hurting Gwen again. So I’m leaving Mythos and going somewhere far, far away. I know Gwen wonders what’s happening to me, whether I’m safe. I can’t tell her, but this is my story … My review: Thanks to NetGalley and […]

My Super Sweet Sixteenth Century (My Super Sweet Sixteenth Century #1) by Rachel Harris Blurb from Goodreads: On the precipice of her sixteenth birthday, the last thing lone wolf Cat Crawford wants is an extravagant gala thrown by her bubbly stepmother and well-meaning father. So even though Cat knows the family’s trip to Florence, Italy, is a peace offering, she embraces the magical city and all it offers. But when her curiosity leads her to an unusual gypsy tent, she exits . . . right into Renaissance Firenze. Thrust into the sixteenth century armed with only a backpack full of contraband […]

Today I am part of the blog tour of Day After (The 19th Year #2) by Emi Gayle Day After (The 19th year #2)by Emi Gayle Blurb from Goodreads: Demon crypts. Vampire lairs. Glowing angels. Sexy sirens. The stuff of fiction. Or so Winn Thomas always thought. Since being accepted into the fold of the supernatural, he knows better. None of what he imagined is true, but everything he feared is, and binding himself to his Changeling girlfriend until her nineteenth birthday will give him an education far beyond what he’d get at his human high school. Luckily, Winn’s not […]