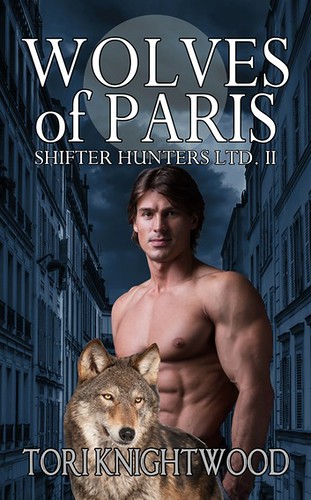 Blurb:
Everyone loves Paris in the springtime—especially former rivals who are now lovers—except when it’s full of violent rogue shifters.

Ryenne Cavanagh is still a fierce shifter hunter proving herself in a man’s world. But, for the first time in her life, she has doubts about her future. After the events in Kenya, Ryenne and Lucien are spending time in France and moving forward as a couple. But Ryenne has always been a lone wolf. She doesn’t know how to let someone into her life.

And as long as there are rogues in the world, there is no such thing as a vacation for a shifter hunter. A stabbing in a nightclub and a mysterious string of armed robberies challenge Ryenne to up her game. As the rogues continue to attack, Ryenne must find a way to save Lucien and admit her true feelings for the wolf shifter who stole her heart. If she can’t, Ryenne might lose him forever.

Don’t miss out on the steamy continuation of Ryenne’s adventure. Scroll up and grab your copy today!

I really enjoyed the first book in this series and a short while later I jumped into book 2. Wolves of Paris is even better than the first book. I liked how the continuing plot line and hints they uncovered in book 1 now progress into the main plot of this book. The focus is on a group of rogue shifters called the Fangs and someone called Lord and Lord Enterprise and why are they interested in Ryenne and Lucian? There are more twists and turns in this book as we slowly figure out a bit more, but plenty is still unclear and I am curious how book 3 will wrap things up.

This was a great continuation of book 1. We see more of the big picture of the Fangs and Lord Enterprises and what they’re doing. In this book Ryenne is visiting France to spend some time with Lucian and they land into some trouble with the fangs again and slowly get more involved. It was a great read and I liked seeing the main plot line continue as well as the romance.

I liked the switch of scenery. How in the first book we get a taste of Kenya and here of France. It feels like author has knowledge about Paris and France with the way she describes things and some french is thrown in as well, but it was always possible to figure out what they were saying. I liked seeing how Ryenne experienced her visit as well as how this Lucien’s home.

While in the first book I struggles at times with the pace and how parts could feel rushed and lacked impact, I thought that was a lot better in this book. While the pace is fast there are more spaces where the characters catch their breath or where the consequences of their actions are felt. I liked how this shows the impact of certain events more. Although I would’ve liked to see a bit more how Ryenne deals with something that happens toward the end, but that might be shown in book 3. I liked how the chapters were relatively short and the book had that keep reading feel where I kept thinking one more chapter. It’s well paced and kept my attention and had me wanting to find out what happens next.

I like how we got to see a bit more of Ryenne and Lucien. We get to see more of their characters and personalities and also of their romance. Ryenne isn’t sure if she’s ready for a bigger commitment yet, but she finds herself slowly falling deeper for Lucian. They did have a few hurdles to overcome in their relationship, but I think in the end it brought them closer. I was a bit annoyed how Lucien didn’t clear the whole thing late in the book up earlier, but I am glad they did resolve it. I liked seeing their feelings grow and I liked seeing them work together.

To summarize: I really enjoyed this sequel. It continues the plot lines that are set up in book 1, but also feels like a new part of their journey. Ryenne is visiting Lucien in France and this book takes place in France. It was fun seeing a new setting, but with the same main characters and have the main plot line progress. I liked the fast pace and relatively short chapter length and it made for a story that was hard to put down. The first book sometimes felt rushed and some scenes lacked impact, but that wasn’t an issue here. The writing and pace felt smoother and while fast paced, it didn’t feel rushed. I liked seeing more of the main characters and seeing their romance progress and develop. It also was fun to see some more of Gavin and Ryenne’s mother and meet some new side characters in the form of Lucien’s family. There are some interesting twists and turns in this book and I am curious to see where the story goes next. All in all this was a great read and I am looking forward to read book 3.

One response to “Review: Wolves of Paris by Tori Knightwood”