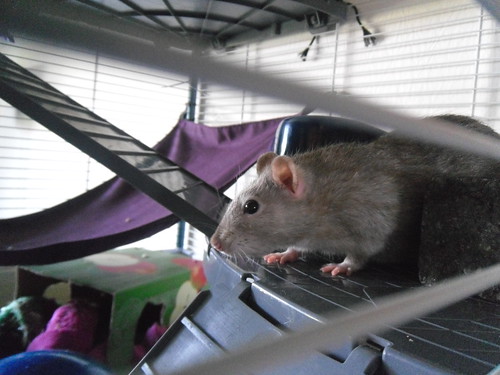 Friday evening I noticed she made some sounds when breathing, so we decided to keep a close eye on her and go to the vet on monday morning. Saturday morning she was worse, she had clearly trouble breathing, but she still ate and drank. We made sure to feed her some yummies and give her lots of attention. Then sunday morning she was even worse, she was gasping for breath so we picked her up and took her to the weekend vet. There she got two injections with things to help her. And they kept her there I the oxygen room for 6 hours. The emergy weekend vet is a different vet than our normal vet and I felt very uneasy there, the vet’s where chaotic and didn’t answer our questions or reasured us. So with a sad and uneasy feeling we left the vet.

That evening we could come and get her and the vet said she was doing better. My sister could drive us there to pick her up. We took her home and gave her lots of atention, we also got her to dirnk a bit, but she didn’t want to eat anything and was still having trouble breathing, but she was doing better than that morning. We kept her in the ept carriage cage next to our bed. Durign the night I woke up as Smarties could’t sleep and wa strashign around in her cage. So I hold her for a bit petted her and then brought her back to the cage with Snickers, thinking she might sleep better there. The vet siad she needed as little stress as possible and the vet carrier obviously made her stressed. When we woke up monday morning my boyfriend went to chekc on Smarties and said her nose had turned blue and she was doing worse than the previous evening. We worried and decided to call our own vet and bring her there. She got even worse and a half hour before I had to leave for the vet she turned worse. She was frantic, tossing and turning and gasping for breath. Havign sudden panic attacks and sprinting to the other side of the couch. I picked her up and hurried to the vet. A few minutes after I left the house there was a frantic movement in the carrier cage and then nothing. She lay still and I didn’t hear her frantic breathing anymore. Once I finally got to the vet she confirmed Smarties was dead. I cried a lot and got to spent a few more minutes with her dead body, before I left. The vet didn’t even charge me for the visit. They are a great vet and I was glad I could at least leave her there instead of at the weekend vet.

It was one of the hardest weekends we ever had, seeing her go bad so quickly and so different from her normal self, then the stressful visit at the weekend vet and then having her die on the way to our own vet on monday. We will remember her as the active and happy rat she was. We named her after the candy Smarties, but we often called her Smart or Smarty-Part. She loved doggy cookies and collecting food. We could stand in front of her cage and give her food and she would run away to hide it and come back for more. She continued until we didn’t give ehr any food anymore. She was always runing around, ready to get out of the cage. She was a healty rat and beside one tumor she never had any health issues. She was very patient when she wnated something, she could sit in front of the cage door waiting till we would get her out. She was a joy to have around and will be missed a lot. The picture at the top is the last picture I took from her. Below are some older pictures of our wonderfull rat. 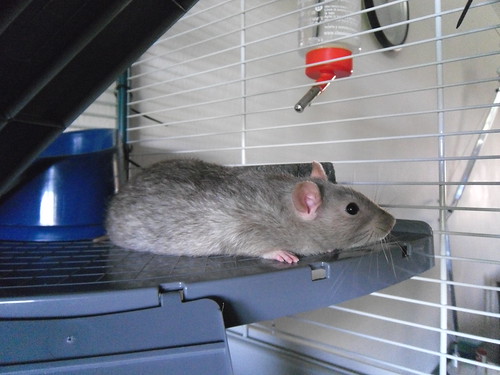 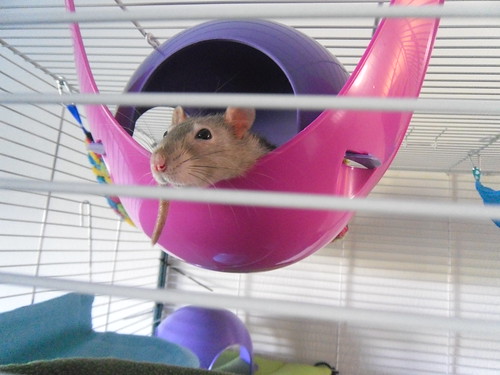 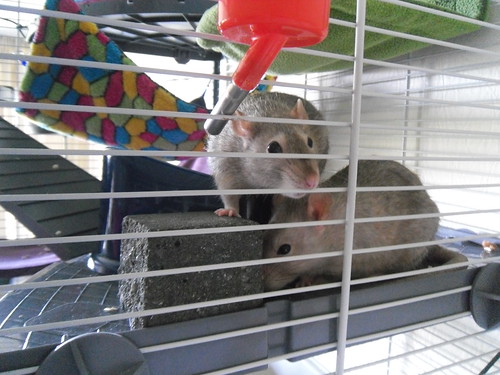 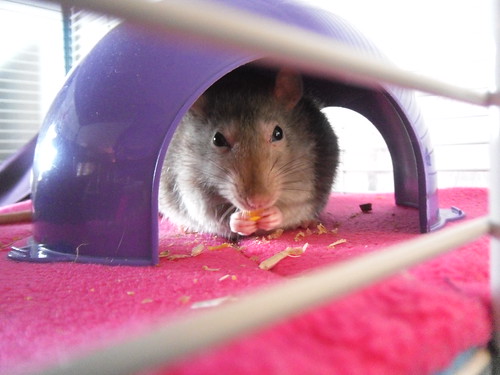 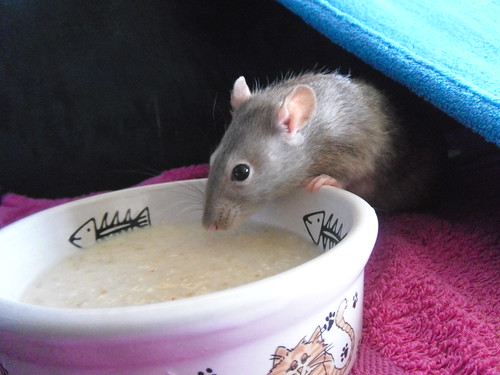