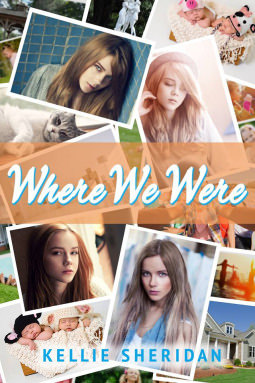 Where we Were (Four of a Kind #0.5)
by Kellie Sheridan

Blurb:
Our entire lives had been shaped around our identity as identical quadruplets. Four sisters, all with the same face, but totally different personalities. We were four of a kind, and there was never a time when we didn’t have each other to lean on.

But when our parents announced that we’d been moving away from the city and back to the town where we were born, we could no longer be certain of anything but change.

This is where we were.

Prequel to Four of a Kind, a new series coming from Kellie Sheridan in 2017.

My Review:
I received a free copy of this book from the publisher on netgalley and voluntarily reviewed it.

Where we Were is a short prequel novella for Kellie Sheridan her new series Four of a Kind. I liked the idea for this series and the focus on four identical sisters. So when I saw the novella pop up on netgalley, I decided to give it a try and see if this was a series I would like to continue. And after reading this novella I can say that I am really looking forward to book 1!

Where we Were is told from four alternating point of views and we get to see the point of views of each of the four sisters. I have to admit that at first I had the hardest time keeping them apart, all four their names start with an R which somehow makes it really difficult for me to remember who is who. But as the story progressed it got easier. All four of these characters really have their own personality and I managed to connect each personality with a name by the end of this book. I liked seeing how different they were, but also how close they were to each other.

I thought this novella was well written. It’s an introduction to all four of the characters, but it also tells part of their story. The book starts when they hear they will be moving and ends the night before they move. It shows how these four sisters deal with the prospect of moving and their thoughts and emotions. I liked getting to know all four sister and I really liked how each chapter started with one of the sisters describing the sister whose point of view we get next. These short pieces gave a feel for both the sister who was writing it and the sister they were describing and it helped me get a feel for each of them. I found something I liked or could relate to in each sister.

I thought the novella was well written and once I started I just wanted to keep reading as it was such a fun read. It is a short read, but it manages to get me excited and curious about this series and give me an idea of what to expect. Although I do wonder if each book will be told from four point of views or if it will be one book for each sister. I liked seeing how each sister dealt with the prospect of moving, how they said goodbye and what they would miss most. It really dragged up memories of the times I moved houses and how bittersweet and sad it can be, but also exciting.

To summarize: this was a fun prequel novella that got me excited for the first book in this series. It’s told from the of point of views of four identical sisters who got the news they have to move to another town, away from where they grew up. At first I had a bit of trouble keeping the four sisters separate and remembering who was who, but as the story progressed I got a feel for each of their personalities and by the end I had a good idea of who each sister was. The four different point of views really worked here and I liked seeing how different all the sisters were and how they looked at things differently. I really enjoyed reading this one and am looking forward to book 1!

Do you like prequel novella’s? Do they help to get you excited for a series?

10 responses to “Review: Where We Were by Kellie Sheridan”