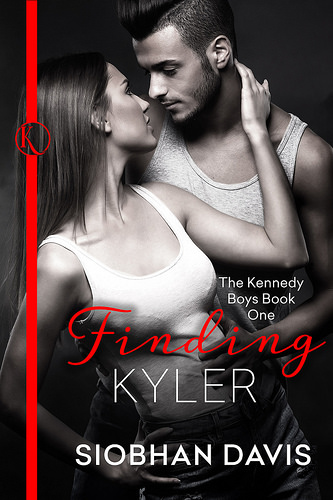 You shouldn’t want what you can’t have…

Faye Donovan has lost everything. After her parent’s tragic death, she’s whisked away from her home in Ireland when an unknown uncle surfaces as her new guardian.

Dropped smack-dab into the All-American dream, Faye should feel grateful. Except living with her wealthy uncle, his fashion-empire-owning wife, and their seven screwed-up sons is quickly turning into a nightmare—especially when certain inappropriate feelings arise.

Kyler Kennedy makes her head hurt and her heart race, but he’s her cousin.

And he’s not exactly welcoming—Kyler is ignorant, moody, and downright cruel at times—but Faye sees behind the mask he wears, recognizing a kindred spirit.

Kyler has sworn off girls, yet Faye gets under his skin. The more he pushes her away, the more he’s drawn to her, but acting on those feelings risks a crap-ton of prejudice, and any whiff of scandal could damage the precious Kennedy brand.

But when everyone has something to hide, a secret is a very dangerous thing.

Full of scandal, dysfunctional families, teen soap-opera-style angst and drama, secrets and lies, mean girls and catfights, lust and love, book one in the unputdownable Kennedy Boys series will have you flipping the pages’ way beyond bedtime!

Only recommended to readers aged 17+ due to mature content and language.

Read an exclusive, advance sample of this book here: http://eepurl.com/cpxkFP

My Review:
I received a free copy of this book and voluntary reviewed it.

When I heard Siobhan Davis was writing a contemporary romance I was immediately curious how she would pull off this genre. After finishing Finding Kyler I can only say she rocks this genre! Finding Kyler is an addictive read that I didn’t want to put down once I started reading. It has the same character and relationship focus, drama, foreshadowing and cliffhanger endings that I am used to from her other books.

I never imagined an author could put just as much foreshadowing, hints, clues and mystery in a contemporary romance as in sci-fi romance, but Siobhan did it. From the beginning I started guessing about backstories and having these theories of what was up with everyone. I loved it! There is a bunch of characters in this book and everyone has something to hide, their own secrets and their own problems. I did manage to guess the big twist at the end and I was quite pleased about that. I don’t think it was too obvious, but you could figure it. The ending is a brilliant cliffhanger ending, that makes me wish the next book was already released.

This book is filled with drama, a lot of the drama is the good type of drama and I enjoyed reading it. But there were also a few instances of miscommunication and lack of communication drama, which I wasn’t a fan of. There are also a few scenes that didn’t sit quite right with me and a few times where I thought Faye went a bit too far with what she said. But even though I rolled my eyes a few times and wanted to shake some sense in the characters.

I liked Faye as a main character, she isn’t afraid to speak her mind and she can take care of herself. Although I did feel that this went a few times into the mean category. She wasn’t afraid to insult someone back or retort to violence to emphasize her point. She was sassy and always had something to say, I liked how she stood up for what she wanted and made things clear to others. I do wish we had seen more of her Irish influences, as while she comes from Ireland and then moves to the US. I didn’t really feel she was Irish except for a few words she used and I also didn’t really feel the US setting came alive. The high school drama almost had a bit of an over the top kind of feel like the kind you see in movies and books.

Besides Faye we have her uncle and his wife and their 7 sons. Yes 7 sons and their names all start with a K. I sure had some trouble keeping the cousins apart, although it did get better as the book progressed. There are some of the cousins we see more of than other, mainly Kyler, Kalvin and Kaeton play a bigger part here. The other cousins we get to know a bit less of, there are scenes with them, but I didn’t get as much of a feel for their personality. Overall I liked the cousins, this family is so messed up and they sure do some stupid things, but I also started to care about them and they are so broken and messed up at times I just wish they all met their match that could steer them in the right direction and have someone to care for. There is a great scene towards the end were they all rally together, but there are also scenes that show how divided they are. These character really are messed up and at the same time I couldn’t help but grow fond of them.

There are also some new friends that Faye makes, like Rosa, Lana and Brad, who all play their part as well. I also liked how even with such a bunch of characters it rarely got confusing, I only had some troubles with the cousins as their names all start with a K.

At first I wasn’t quite sure about the romance and I never fully warmed up to Kyler, although he does show a sweeter side as well. Kyler seems to run hot and cold, being downright mean to Faye and then being super thoughtful the other moment. I felt like he solved his problems in all the wrong ways, but just like the other cousins he also was this messed up and broken boy who could use the love and care from another human. The romance between him and Faye is a bit of a forbidden romance as they are cousins and even though it isn’t illegal, early on it’s obvious there is a lot stacked against them. In true Siobhan style the romance has it’s up and downs, deep pits and then highlights that make me think these two are great for each other after all. It’s a bit of a rollercoaster of emotions with the ups and downs. There is potential for a love triangle and knowing Siobhan and her previous books I wouldn’t be surprised if it goes there in the second book.

To summarize: filled with drama, forbidden love, foreshadowing and a great group of characters with all their own problems and secrets, Finding Kyler is the addictive start of Siobhan her new series. I couldn’t put this book down when I started reading. It was very additive and despite some issues that I had, I was hooked. I love how Siobhan manages to even put foreshadowing in this book and quickly I was guessing and forming my own theories about the secrets characters kept and their backstories. I was pleased I managed to predict the big twist at the end, there are enough clues to figure it out, but it still manages to feel like a big surprise for the characters and it wasn’t too obvious. There is a great cliffhanger ending that makes me wish the second book was out already. Faye is a great character who can stand up for herself, she’s sassy and doesn’t hesitate to talk back, although I do think sometimes she went a bit too far with her insults and she retorted to violence sometimes. Faye has 7 cousins and it was a bit difficult to remember who is who at times as their names all start with a K, but by the end I was doing better remembering who was who. This family is so messed up and they all make their share of mistakes, but at the same time I can’t help but grown fond of these characters. The romance is a bit of a forbidden romance, there is some hot and cold behavior from Kyler and I never fully warmed up to him, but there are some very sweet moments as well and by the end I did think these two were good for each other. All in all this was an addictive read filled with drama and a group of memorable characters and I can’t wait for book 2!

Links:
– Goodreads
– Amazon
Finding Kyler is only 0.99$ for a limited time!