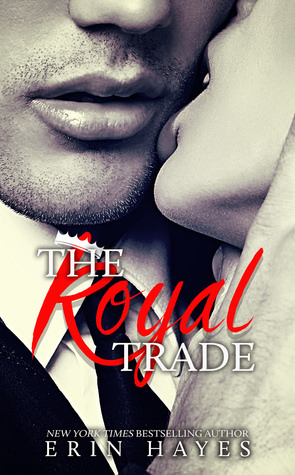 The Royal Trade
by Erin Hayes

Blurb:
Cara thought she was living the fairy tale life.

After all, she is engaged to the man of her dreams, who just happens to be the prince of an island nation in the Mediterranean. But when he publicly cheats on her, her life is turned upside down and she doesn’t want to come back to reality.

Then Eric, her ex-fiancée’s brother and a playboy prince himself, offers her the chance to run away from it all.

Because he fell for her first. And he’s going to prove to her that she fell for the wrong prince.

My Review:
I received a free copy of this book from the author and voluntarily reviewed it

The Royal Trade was a fun and short read. It is told from two point of views, that of Cara and Eric. Cara finds out her fiancé has been cheating on her, she isn’t sure what to do, but she wants to get away from it all. And that’s exactly what she gets. Eric has always been in love with Cara since he first met her, but she was his brother’s fiancé. When he finds out his brother cheated on her, he ask Cara where she wants to go and that’s how they end up in New Zealand.

Erin Hayes really knows how to write awesome short stories. No matter the length of her books it always feels like a complete story. And while that was the case here, I also wished it was a bit longer, so we would’ve had more chance to get to know the characters and see their romance grow a bit more slowly. Now we get some scenes that show their romance progressing, but also some time skips and I would’ve liked to see more scenes of them together. I was pleasantly surprised by how some things got resolved at the end. Things made sense and felt real and I liked how things were a bit more grey than black and white. It was a fun read and I enjoyed reading it.

I liked that the book was set in New Zealand, but at the same time it was hard not to compare it to the only other book I’ve read so far that was set there. And I did enjoy that one more than this book. I wanted to see more of New Zealand in this book and mostly visualized things based on the few things that got mentioned and my own image of the country, so not sure how correct that is.

We get to know a bit about both Cara and Eric, enough to get a feel for them, but I felt like they didn’t get as fleshed out as I would’ve liked. They both have some quirks and personality traits we get to know, but I guess I just wanted a bit more. I didn’t quite care for Eric at first, although it did became obvious his feelings for Cara were real and I liked how he wanted to make his own path and didn’t always follow everyone’s expectations. And I did like his gesture at the end. Their romance seems to happen quite quickly, although the in book time is longer, we just only get to see pieces of it. I did like these two together and I was happy with how everything got resolved at the end.

To summarize: this was a enjoyable short read. This author can write shorter length stories really well without them feeling rushed. Although I still would’ve liked if it was a bit longer so we would get to know the characters more and see more scenes of how their romance developed. I did like how both characters had some quirks and personality traits to give them some personality. Although I would’ve liked it if they were a bit more fleshed out. The romance seems to progress quite slowly as we only get to see some scenes of their time together, while in book time it takes longer. All in all a fun read if you’re looking for a short romantic read.

Have you read a book that takes place in New Zealand?

12 responses to “Review: The Royal Trade by Erin Hayes”