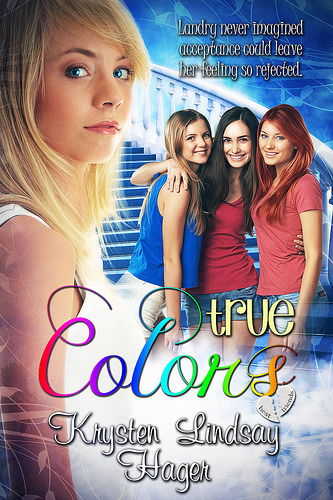 Blurb;
Landry Albright just wants to be one of the interesting girls at school who always have exciting things going on in their lives. She wants to stand out, but also wants to fit in, so she gives in when her two best friends, Ericka and Tori, push her into trying out for a teen reality show modeling competition with them. Landry goes in nervous, but impresses the judges enough to make it to the next round. However, Ericka and Tori get cut and basically “unfriend” her on Monday at school. Landry tries to make new friends, but gets caught up between wanting to be herself and conforming to who her new friends want her to be. Along the way she learns that modeling is nowhere as glamorous as it seems, how to deal with frenemies, a new crush, and that true friends see you for who you really are and like you because of it. This is the first book in the series.

True Colors was a fun and enjoyable book, it focuses on main character Landry, her life, her troubles and her friends. Landry her friends convince her to try out for a modelling competition, but when she goes through to the next round and her friends not she has to deal with her friends suddenly not talking to her anymore. I think the author did a great job capturing the young teenager voice, from worrying about friends, what to wear or where to sit at lunch it felt very realistically written.

Besides the normal early teen drama worries there is also a plot line with the modeling thing and Landry her parents situation. Her parents are together, but they live apart due to her dad not being able to get a job here. And it’s just the kind of weird situation that could happen in real life. Landry really struggled with this and I liked when she finally told one of her friends about it. I am curious how this situation will be resolved.

One of the things that bothered me a bit when I started reading was that the writing style was a bit off. Not sure how exactly to explain it, but sometimes it felt a bit rushed or choppy. A scene would end while it didn’t feel fully finished yet or Landry would go to school and you would almost get snapshots from memorable things people said or what happened before jumping to the next scene. Like some scenes could’ve gotten a bit more attention or got scrapped altogether. It also was a bit too much telling instead of showing at times. And sometimes I wish things would slow down and we would get more about Landry thought and felt about everything that happened. After a while the writing style got better or maybe I got used more to it, but I bothered me less and I was able to enjoy this story more.

And while I enjoyed it I almost wished I could’ve read this book when I was that age as then I could’ve related more to it and probably enjoyed it even more as I was at the same stage. The book did remind me of that time in my life when I was a young teen and how I am I glad I am not that age anymore. I much rather read about it than live through that again.

I did like Landry as a main character, she was nice and friendly most of the time. Although I did wish she would stand up for herself more, but on the other hand I could also understand why she didn’t as I was the same at that age; way too forgiving, trying to make others happy, trying not to be left behind and not speaking my mind. So I think it was realistically, but it just made me feel sad for her. I could relate to Landry on some points as she was similar to me at that age on some things, but not so much on others, like how she cared so much about make-up for example. I hope she will change and grow a bit in the later books as I think it would be interesting to see. I also wish we had gotten more of a feel for Landry her thoughts and feelings. As it felt we got a bit too little from that.

Besides Landry there is a whole bunch of side characters, so many I couldn’t keep them apart at first, but slowly I got a bit of a feel for them. I actually didn’t really like most of them, but I don’t think we’re supposed to. I did like Peyton and Ashanti, who seemed real friends to Landry and care about her. Others seemed nice at first, but then would act nasty to Landry the next day. And they were all just typical teenagers with all the teenager drama. At times it felt a bit too much and I wish they would stop worrying about such things, which is why I don’t read books like this too often, but overall I enjoyed reading this book. There’s a hint of romance, which worked nicely and I think we’ll see more of it in the next book.

To summarize: True Colors was a fun and enjoyable book. The author managed to capture the teenage voice really well and this book reminded me of when I was that age. There is a lot of typical teenage stuff and drama, it got a bit much at times, but overall I thought it was realistically written. And I enjoyed reading this book. The writing style seemed a bit off to me, but I did gradually got used to it. Landry is a nice main character and while I thought she acted realistically I also felt a bit sad for her as she wouldn’t stand up for herself. I also would’ve liked to get a bit more of her inner thoughts and feelings as it felt a bit too much telling instead of showing at times. There are a lot of side characters, which made it difficult to keep everyone apart at first, but slowly I got a bit of a feel for them. I didn’t really like most of the characters, but some of them were nice. I am curious to see how this series will develop an will read the next book!