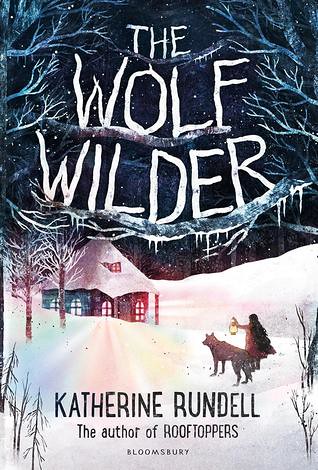 The Wolf Wilder
by Katherine Rundell

Blurb:
Feodora and her mother live in the snowbound woods of Russia, in a house full of food and fireplaces. Ten minutes away, in a ruined chapel, lives a pack of wolves. Feodora’s mother is a wolf wilder, and Feo is a wolf wilder in training. A wolf wilder is the opposite of an animal tamer: it is a person who teaches tamed animals to fend for themselves, and to fight and to run, and to be wary of humans.

When the murderous hostility of the Russian Army threatens her very existence, Feo is left with no option but to go on the run. What follows is a story of revolution and adventure, about standing up for the things you love and fighting back. And, of course, wolves.

The Wolf Wilder wasn’t quite what I expected and I was actually a bit disappointed by it, the book has a great concept namely that of the Wolf Wilder and then spends a whole book not doing anything with that topic. Sure there were wolves around and I liked that, but there wasn’t much wilding taking place. It was more a quest around the countryside to save her mom, who was taken for no real reason, start a revolution and it was quite short and even a bit rushed at times and the other half things didn’t made quite sense. And even though it was short, it still felt slow and boring at times as well, while other parts weren’t fleshed out enough. There were scenes that didn’t really work or things that went too easy and were a tad unbelievable. Like the scene at the end. Although I did like the actual ending, I just thought the scene right before that was a bit unbelievable and too easy.

It was a shame I didn’t like it more, but it just fell flat for me. I wanted to see more wolf wilding, not a weird villain who hurts people and burns their homes for no reason at all. The ending had some nice build-up but was also a bit disturbing as they were so many kids involved and they teach those kids how to fight and it just made me sad instead of rooting for them. Kids of 6 years old shouldn’t have to learn how to fight, they shoudl be out playing. And how could one day training prepare them for anything. It was just a bit unbelievable. I did like the message of fighting for what you love and how sometimes you need to be brave enough to do something, but the whole book fell a bit flat and I couldn’t bring myself to really care.

There are also places where it says illustrations here and I think those illustrations might actually have added some flavour to this book, so as this was an ARC I can’t say anything about that, just that the final version will apparently have illustrations. Also the writing and tone felt very distant. There is some animal cruelty and normally that would have me close to tears, especially with our rat dying while I was reading this book, but the writing was so distant, it didn’t move me. I didn’t really felt involved or close, but more like watching things from a distance. The story can be a bit dark and disturbing at times and I didn’t like the plot too much. I also didn’t really get why her mom was taking and why the villain did what he did. It just didn’t make sense to me. Why have a country with wolf wilders and then suddenly decide they shouldn’t wild the wolves anymore.

The characters were interesting enough. You have the main character who is surrounded by wolves which was pretty cool. And Illya who isn’t quite who he seems and there’s a nice twist later of what he becomes and then there is the charismatic Ariel, who wants a revolution. They were interesting enough to add some flavour and colour to the story and I liked that. I would’ve wished to get to know them a bit better though. I also liked the part the wolves played in this book, they were quite present and that was nice. Then there is the villain who is plain evil and maybe even a bit crazy, but he had no motive and I just wanted more out of it. He had no depth or reason for his actions, he just was a maniac, but no reason or story of how he got there and why.

When it comes to world building this book takes place in Russia and there are a few Russian words thrown in. I first thought one of the word was someone’s name and was quite confused until I figured out it was a russian word probably. I liked the setting and I felt like that part at least came alive with all the snow and how the main character knew how to survive in the harsh winter. There is enough descriptions to form a bit of an imagine about the setting. One thing that was a bit vague was when this story takes place, I actually think it’s in the past, but my knowledge of Russian history is too limited to tell when. When it comes to world building around the wilding, the concept was great, but only in the first few chapters there is some wilding and then for some reason someone wants them to stop wilding, while before that it is established why they do this and it just didn’t make sense. After that it’s a story of a wolf girl, but not a focus on the wilding aspect.

To conclude: this was a bit disappointing and not at all what I expected. I expected focus on wolf wilding, but instead it was a girl going on a quest to save her mom, accompanied by wolves. The wolves were cool, but the story and plot fell a bit flat. It was rushed at times, slow at others, short and unbelievable at other times. The plot didn’t quite make sense or how they went form A to B, it just felt a bit off. The characters are interesting, but the writing was too distant to really make me care about anything or anyone. Read this book if you want a book about kids standing up and fighting for what they love, a girl who has wolves travelling with her and a Russian setting. For me this book just felt a bit off and wasn’t what I expected.

How do you like your villains best? How evil should they be? Do you want to know their motives and past?

12 responses to “Review: The Wolf Wilder by Katherine Rundell”