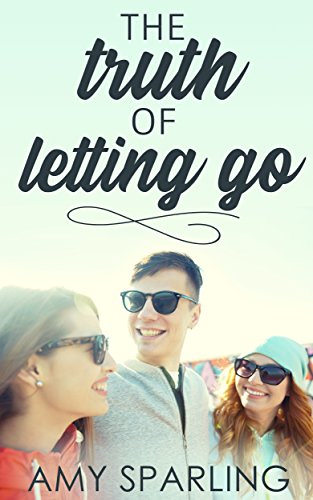 The Truth of Letting Go
by Amy Sparling

Blurb:
The summer before senior year, Lilah Monroe’s parents take a nine-day trip, leaving her as the guardian of her bipolar cousin, Cece. When Cece’s parents died tragically five years ago, she and her brother moved in with Lilah. Her brother soon went missing and was presumed dead.

Lilah and Cece couldn’t be more different. They used to be best friends, but high school has changed them both. Lilah likes order, schedules, and a tidy room. She has plans for her future and won’t let anything derail it, not even Cece whose life is constantly on the edge of chaos. Cece is messy, erratic and sensitive. She also has a reason to believe that her brother is still alive. Despite Lilah’s reservations, Cece tracks down an old friend who believes her theories. Ezra happens to have gotten really handsome since Lilah last saw him. Too bad they never really got along when they were kids.

Knowing the odds are stacked against them, Lilah breaks all of her parent’s rules for order and reason and joins forces with Cece and Ezra to set out on the road in an old RV in hopes of finding her dead cousin. Lilah and Ezra have a love connection amid the chaos, and when they discover what really happened to Thomas, it’s a truth no one saw coming. One that just might get them killed.

I wasn’t quite sure what to expect from this book as this was a new to me author. The road trip, the mystery of what happened to Thomas and two cousins who couldn’t be more different is what got me curious about this book. It sounded like it would be a fun read and that’s exactly what it was.

The Truth of Letting Go follows the point of view of Lilah. Lilah is a rule follower, she does what is expected of her and is pretty much a normal teenager. Then at the start of their summer her parents announce they’ll be away for a nine day trip leaving her alone with her bipolar cousin Cece. Ever since the disappearance of Thomas, Cece’s brother and Cece’s diagnosis as bipolar she and Lilah haven’t been friends. But a road trip forces them together again and I loved seeing how they dealt with everything.

I thought Lilah felt like a very realistic teenager, although I didn’t always like her at first, I did understand her behavior and it definitely felt realistic. She basically shuns Cece, not wanting to be associated with her bipolar cousin. She likes spending time with her best friend Kit and her parents leaving means she doesn’t get to do any of that as they can’t leave the house. But then she slowly starts breaking those rules and realizing how the treated Cece. I really liked seeing her change throughout this book.

The start of this book didn’t really pull me in and I wasn’t sure if I was going to enjoy it, but then the plot line surrounding what happened to Thomas started and then the book had my attention. I really liked the mystery plot line, it’s not really a full blown mystery, but more this low key kind of mystery that feels very realistic and down to earth, but also earth shattering for those involved.

I was so curious what really happened to Thomas, was he still alive and if yes, then why did he disappear? And if he was dead how would they deal with it and what really caused his death. When the truth of what happened to Thomas comes to light I definitely was surprised, but I liked how it made sense and how we got these little hints and insights into his personality along the way. I did feel the ending got wrapped up a little bit fast, but at the same time it also felt like a good ending for this book.

While the book mostly has this light feel, it also touches upon some topics like dealing with a mental illness, being a teenager, losing someone and falling in love. This family has been broken apart by the death of Cece’s parent and her brother’s disappearance and then there is her mental illness and Lilah’s mom tries to fix everything with therapy, but that isn’t full working. I did think it was a tad unrealistic how Lilah’s parents left them alone for so long, especially with the type of person she seemed to be. It just seemed a bit too convenient, but at the same time it was absolutely necessary for the story. I also liked the message how even tough Cece was bipolar she was still the same person as well and one who had hopes and dreams. And treating her like a sick person just made things worse and she just wanted to be treated normal.

While the book is told from the point of view of Lilah, I felt like we got a good feel for Cece as well. I liked how different they were, but also how those differences weren’t a bad things. I liked getting to know these two characters and seeing how they interacted. The road trip also was a fun touch, although they don’t go too far, it still felt like a bit of an adventure. A journey to find out the truth about what happened to Thomas.

There also is a bit of romance, although less than I had expected? But that’s not a bad thing. I thought the romance was done well, just the right amount of it sprinkled in throughout the other things. And I wouldn’t even fully classify it as a romance novel as it doesn’t feel like it’s the main focus at all, but it’s an important part of the story. I thought Lilah and Ezra were cute together and I also liked how honest Ezra was with Lilah and makes her see how the treated Cece.

To summarize: I really enjoyed going on this road trip together with Lilah, Cece and Ezra to discover the truth about Thomas’s disappearance. There is a cute romance, some great and realistic characters we get to know, a road trip and a bit of mystery what happened with Thomas. I really liked the bit of mystery and reveal of what happened to Thomas came as a surprise to me. And the journey to that point was great to read about, I liked how they followed these clues, but also how the characters changed along the way. It deals with topics like loss and mental illness, but overall the book has a light and optimistic feel. I thought Lilah was a very realistic character, although I didn’t like her as much as first, it was great seeing her change over the course of the book. The romance was cute and a fun addition to the book. And I liked getting to know Cece as well along the way. All in all I enjoyed reading this book and definitely plan to read more from this author.

What’s the last book you read with a road trip in it? Do you like reading about road trips?

6 responses to “Review: The Truth of Letting Go by Amy Sparling”