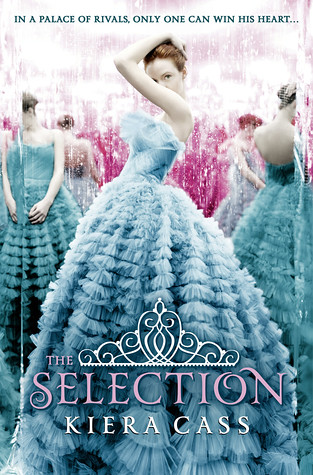 Blurb:
For thirty-five girls, the Selection is the chance of a lifetime. The opportunity to escape the life laid out for them since birth. To be swept up in a world of glittering gowns and priceless jewels. To live in a palace and compete for the heart of gorgeous Prince Maxon.

But for America Singer, being Selected is a nightmare. It means turning her back on her secret love with Aspen, who is a caste below her. Leaving her home to enter a fierce competition for a crown she doesn’t want. Living in a palace that is constantly threatened by violent rebel attacks.

Then America meets Prince Maxon. Gradually, she starts to question all the plans she’s made for herself–and realizes that the life she’s always dreamed of may not compare to a future she never imagined.

After reading some mixed reviews I wasn’t sure whether I wanted to read this series, although I liked the cover and the concept and when i saw the book on netgalley I decided to give it a chance and see for myself what it was all about. I have to say I am glad I did as I really enjoyed The Selection. The Selection is a fun and enjoyable book and I just wanted to keep reading. I have to admit it was an addictive book and really enjoyed it.

The Selection is about main character America Singer, she lives in a dystopia future country where the prince chooses his bride through a selection. Every girl in the country is eligible and can submit themselves and then 35 girls are chosen to live in the palace and the prince chooses his bride from among those. It’s almost a fairytale story with how a poor girl gets the chance to become a princes. The plot might sounds a bit ridiculous but it was just so much fun to read about these 35 girls who all wanted the price and/or the crown and al the dynamics surrounding this. I had some expectations about this book and the characters that where quickly proven wrong. Like how the girls weren’t only there for the competition and some made friends. How America wasn’t there for the prince at all, but for her family. And how the prince wasn’t a stuck up rich guy, but someone who genuinely cared and for whom the selection was as hard as for the girl themselves.

So yes the main characters really is named America Singer, she is named after America and she does sing. I seriously had expected that her name would bother me lot, but as it’s told from first person perspective her name isn’t used that much. And there is even a story/ reason behind her name, beside the obvious. So the name didn’t really bother me as much when I was reading. America is a great main character, she loves Aspen and isn’t interested in the Selection, she doesn’t want to marry the prince, but eventually Aspen and her family convince her to sign-up and guess what she gets chosen. I liked how down-to-earth she was, she spoke her mind to the prince without being afraid of the consequences. She made friends with her maids and often preferred their company to the rest of the girls. She was nice to the other girls and didn’t feel entitles to anything as she knows what is to be poor and have hunger. It was refreshing. The side characters are nice, but it’s hard to really get to know any of the side characters as there are just so many of them, I am hoping that will be less of an issue in the next book as only 6 girls remain then. We do get to know Maxon who seems like a nice guy and wasn’t the stuck-up prince I expected, he was nice, even a bit shy and he was pretty open and honest with America which is the thing I liked most about their relationship. I also liked May, America’s younger sister, as she was just a fun and enthusiastic character.

The Romance was nicely done, while America loves Aspen that only plays a small part, some sad things happen between them, but it was obvious they cared for each other. It was harder for me to feel their romance though as we don’t really get their history they are already in love when the book start and while it was written well I still felt like we missed a piece. Then there is Maxon, America doesn’t expect to fall in love with him, but she is nice to him and they become friends and it slowly grows into more. It was nice to see and I liked how open America was to Maxon, especially at first, later that does change a bit. So yeah there was a love triangle, but it was done pretty well in my opinion. Both love interest have a different connection and past and even though I am pretty sure I know who she ends up with I am curious how she will end up there.

The world building is one of the few disappointing facts, but as I has expected this form previous reviews it didn’t bother me too much. Don’t read the Selection hoping for an intriguing dystopia world yes there are dystopia elements, but it really isn’t the focus. I was okay with the world building not being the focus, but in my opinion they better could’ve scrapped it at all and just focussed on the competition. the only piece of world building that really plays a role was the caste system. Then there are the rebel attacks, but it all felt a bit off. There are multiple rebel attacks and it’s supposed to be scary, but it was hard to care as we knew so little of the rebels and they never did anything. So yeah the world building was really weak and only the caste system played any role.

To conclude: this was a fun and enjoyable book and I just wanted to keep reading as I was really enjoying this book. The story is fun to read about with the girls competing for the prince his love. The characters are likeable and I especially liked America and how down to earth she was, she was just a genuinely nice person. I was also surprised by the prince and how he was actually a nice person. The romance is done well, there is a bit of a love triangle although I felt more of the romance between America and prince Maxon as we see that one building from the beginning. There isn’t much world building and I think they could’ve just skipped the whole attempt to make this a dystopia beside the caste system. I enjoyed the book and didn’t mind that there wasn’t much world building as it isn’t about that and it doesn’t detract from my enjoyment that we know little about the world. All in all an enjoyable book and I am looking forward to the rest of the books in the series.

You can buy The Selection here:
– Amazon
– B&N
– Kobo
– The Bookdepository

Can you ignore flaws in the story/ world building or other aspects you find important in a book and still give a book a high rating if you enjoy it a lot or does everything have to be great for a book to get a high rating?

24 responses to “Review: The Selection by Kiera Cass”