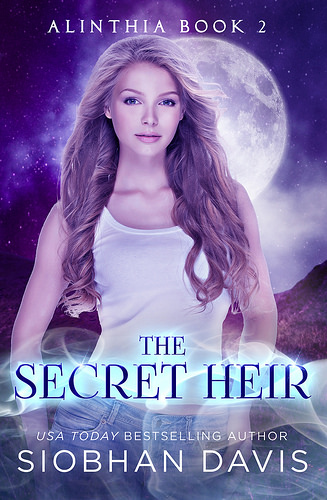 Blurb:
Is it her destiny to save them … or destroy them?

Now that Tori finally understands who she is and what’s expected of her, she’s in full-on freak-out mode. How will she save the galaxy from General Arantu’s clutches when she can’t even control her powers?

Add that to the lack of retaliation by enemy alien forces, and everyone is on edge. Especially when they uncover evidence of a strange alien symbol with possible links to humans, and the mystery deepens, along with their frustration.

But that’s not the only thing keeping Tori awake at night.

Confused over the horrific vision she experienced the night of the Herassan attack, Tori is terrified of revealing details of her protectors’ supposed fate, so she says nothing. Keeping stuff hidden never ends well, and as evil forces conspire against Tori and her four protectors, secrets and lies threaten to destroy everything they hope to achieve. While Tori grows closer to Coop, Maddox, and Beck, Dane remains distant, creating more tension and jeopardizing their bond.

Then an unexpected newcomer arrives, casting suspicion over everything they believe they know.

When Tori finally figures out what’s going on, will she have time to warn the guys? Or is their fate already sealed?

The Secret Heir is the second book in the Alinthia series and it’s an amazing sequel. While book 1 was really good, this one’s even better. The stakes are upped, we learn more about the world and Tori’s relationship with the four boys deepens. There are secrets and reveals and only at the end of the book everything comes together and falls into place with a big reveal.

I really enjoyed this book. At the start of the book Tori is going through some tough times with what happened at the end of the first book and I really felt bad for her. There is a lot of stress and expectations she’s dealing with and I thought it was realistic how she has a hard time dealing with it all. Although I wasn’t too happy with how she kept something a secret from the boys.

It was interesting how there is this quiet before the storm feel for a long time and you just know something bad is going to happen eventually. But I wasn’t sure what. There are these pieces that are all lining up and it was great when at the end we get the big reveal and everything suddenly makes sense and falls on it’s place. And it’s like all the pieces were there, but you’re not sure how they connect and what everyone’s planning. It was really well done.

There is romance, action, some alien politics, some high school drama and more going on in this book. And in a sense book 1 feels like the set-up book and this book takes it all further. We learn more about the galaxy and the meet the mysterious Zorc, there is some space travel in this book and Tori is trying to master her gifts.

The romance was one of my favorite parts of this book. Siobhan Davis handles the reverse harem aspect masterfully. In this book Tori’s relationship with them all deepens. I liked how her relationship with all of them is different and progresses at a different pace and in a different way. Every one of the boys in unique and has their own personality and I liked how their relationship with Tori also reflected that. And every boy get’s his time with Tori, I felt like Siobhan Davis balanced it all perfectly so each boy got enough attention. I also felt like the relationships all feel more real and deep in this book and there’s less mention of their alien connection.

Beck is still my favorite of the boys and I loved the scenes with him, I like his shy personality and how he slowly grows closer to Tori. His shy and quiet demeanor really works for me. Maddox is great too and I liked how things heated up a bit with him in this book. I also warmed up more towards Cooper in this book, he is so caring and protective or Tori. I am still not sure about Dane, but I feel that his behavior does fit his character and it makes sense why he acts this way. But he is often rude to Tori and I didn’t really care for that, but they also have some great scenes together.

Tori/ Alinthia also changes a lot in this book. I feel like she is slowly growing into her powers and the role in the prophecy. But at the same time she also doubts herself and isn’t always as sure of herself and I liked that as it felt very realistic how she struggled with things even as she was growing more comfortable with things. I think she’s a great main character who knows how to stand of for herself and stands her ground, but also has her doubts and insecurities.

Just like in book 1 this book is told from Tori’s point of view, with one chapter from each of the boys their point of view. I liked how these chapters were spread throughout the book and gave us some insights in things from another point of view or what Tori didn’t know yet.

I liked how things got resolved with Jensen in this book. I wasn’t sure how the author would continue that plot line, but I felt like it had a satisfying resolution in this book. There is a bit more drama before it gets to that point, but not as much as in book 1. This book mostly deals with the side characters we already know, except for a few new ones. We meet Zorc, the handler of the boys and I didn’t like him at all, there are some great scene where Tori stands up for the boys in a conversation with him, which was great. I also didn’t like Alandra, she was a bit over the top, but she does have a role to play in all this and it was hard to figure out what was the truth where she was concerned.

To summarize: The Secret Heir is an amazing sequel. I really liked the direction this book took the story. I liked seeing the plot lines progress and the relationships deepen in this book. And there’s all this foreshadowing and buildup till the big reveal at the end, which was great. Tori/ Alinthia is changing in this book and growing more comfortable with her powers and role and I really liked seeing that. And at the same time she also has some doubts and insecurities which felt realistic. Although I wasn’t happy she kept something a secret from the boys. I liked how the relationships progressed in this book and each boy is different and their relationships with Tori is different as well. The relationships progress differently in a way that fits the characters and I really liked seeing how the romance progressed. The romance and revere harem aspect was really well done here. All in all this was a great sequel and after that cliffhanger I can’t wait to see what happens in the next book.

What’s the last book you read with a cliffhanger ending?

6 responses to “Review: The Secret Heir by Siobhan Davis”