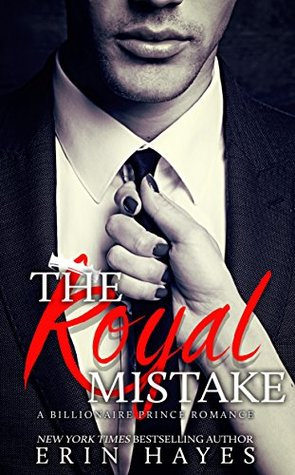 The Royal Mistake (A Billionaire Prince Romance #3)
by Erin Hayes

Blurb:
At twenty-five years old, Catherine’s only commitment was to her job.
Until she saw those two pink lines.

Catherine has buckled down to focus on what was really important in life. Like her career. So when her ex-boss Jessica Croft offers her a job she can’t refuse, Catherine moves to Dubreva, where she’s thrust back into race car driver and billionaire prince Henry’s life.

And Henry won’t let her forget what happened between them one hot night. Even though she’s been trying to forget it.

But then she learns she’s pregnant. With Henry’s child.

I’ve been enjoying this series so far and this book was just as good as the previous ones. This series follows four princes of the small island nation Dubreva as they each find their happy ending. This book is Henry’s story. To be honest I wasn’t quite sure at first if I would like Henry as he seemed a bit of a daredevil type of character. And then there was the fact we already saw a glimpse of his romance in the previous books and I just wasn’t sure how it all was going to work out. But I shouldn’t have worried as the author handled it all really well!

The story starts with a sort of prologue were we get to see what happened between Henry and Cat when they met, this even takes place during the previous book and that was a bit jarring, but after that it jumps forward and we see what’s happening now. It worked nicely as we know what happened to them back then and now got to see how they find their happy ending. And that first scene where they meet was an essential part of their story and I am glad we got that part as well.

Henry wasn’t my favorite character when I met him in the previous book and I was much more curious about Ferdinand, but I thought the author wrote Henry really well. The wreck he has been has changed him and he’s struggling both mentally and physically. It also felt like it caused him to revaluate what he wanted in live and finally stop running. It was great to see the character change and it felt realistic how he had to deal with the aftermath of the wreck.

I did like Cat already in the previous book and it was fun to get to see her point of view. I hadn’t realized that pregnancy would play a big part in this book as that’s usually not my favorite trope. But again Erin Hayes handled it really well. I liked how while these two had some things to work through there wasn’t to much drama or angst or miscommunication going on. It was a gently paced romance about two character finding their way back to each other and figuring things out.

These two were fun to read about and I liked how they worked things out. I was happy with how Cat told Henry about the pregnancy early on in the book and how they didn’t get dragged out. And there are some great scenes between these two as they get to know each other a bit better. I thought Henry and Cat were really food together and I loved the scene where they ended up getting Chinese food and visiting a special spot!

To summarize: This is a great romance read! I have to admit I wasn’t sure if I was going to like Henry and how this romance would work out, but I ended up really enjoyed this book. I thought it was well written how Henry struggles to recover both mentally and physically from the accident and also how he had changed as a character. And he was so sweet to Cat, I loved the scene where they ended up getting Chinese food, it was so sweet! Cat was a great character and I liked how she was honest and open with everyone and told Henry about the pregnancy early on in the book. I also liked that we got to see a bit of the main characters of previous book and the main character of the next book. The Royal Mistake is a light and fun romance with little drama that also touches on some more serious topics and I really enjoyed it.

8 responses to “Review: The Royal Mistake by Erin Hayes”