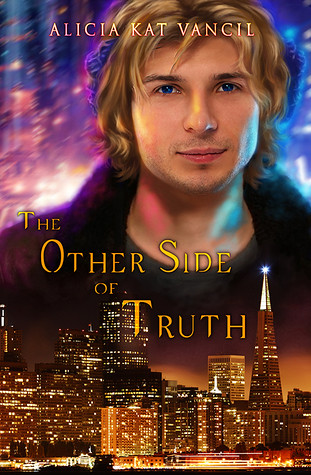 Blurb:
Sometimes the truth is more dangerous than a lie.

We all have secrets. Some we keep from others. And some we keep from ourselves. But when your life becomes nothing more than a lethal construct of secrets and lies, one false step could mean your death.

In the wake of overwhelming tragedy, Patrick, Travis, and Nualla are frantically trying to piece their lives back together. Unfortunately, there’s only so much super glue and duct tape you can paste onto something before you have to admit it might be beyond fixing. However, Travis is unwilling to just give up and accept the devastation of the family he has tried so desperately to patch together. But as he delves into the secrets of the past to uncover how his little brother became the most deadly weapon in the Kakodemoss’ arsenal, Travis begins to realize that there are some secrets better left unlearned.

A spectacular collision of unrelenting love, harrowing secrets, and heartbreaking realities. The Other Side of Truth, the final book in the Marked Ones Trilogy, rips the world of daemons wide open.

My Review:
I binge read this series over the past few weeks and I am so sad this series has ended. I really enjoyed this series and this one is probably my favourite book of the three. This book starts dealing with the consequences of what happened at the end of book 2, the characters are all going through a hard time and it’s hard to see them struggle. The problems are very real and I can understand why it took them a long time to solve things. There are a lot of revelations and hints about the guys who did the experiments and a lot of focus on is that, the plot evolves slowly and we learn more. There are also another new plot lines set up and it feels like this third book still adds a lot to the story. There’s facts about the pasts and things about characters that we learn in this book. There are some very emotional scenes and a lot of love next to the sorrow as well. I really enjoy the author her writing style and how she makes use of foreshadowing and slowly moving different plot lines along. There’s a lot going on, but it all fits neatly and I just wanted to keep reading as it was so well written.

I liked the ending and how things got wrapped up, but I did think the rescue attempt at the end was a bit too short, I think there was more potential in that scene. It seemed a bit too easy? I mean these are the evil guys they worked against the whole time and they never could do anything because they didn’t know the address, but for how horrible it was what happened there it seemed like it got solved a bit too easily. Then there are a few plot lines that don’t get tied up as neatly and some questions that remain unanswered. There was a mention of another series in this universe, so I am thinking that’s probably the reason not everything get wrapped up 100%. So I am curious to see what that series will entail, as I definitely haven’t had enough of this world yet. The epilogue was pretty sweet and I am happy so many characters got a happy ending.

There’s a lot still to learn about the characters and with what they go through in this book, it feels like a lot of characters change or we learn new things about them. Nualla struggles with her father not being there and trying to fit into the chancellor role. Patrick struggles with what happened in the previous book and he misses Nualla, but he doesn’t know how to face her after what he did. He also learns more about Aku and I liked how that part got resolved, although I did feel a bit sorry for Aku and Kira. Then Travis is struggling with letting go of this love for Nualla and instead building a relationship with Parker, but he kinda makes a lot of mistakes on the way. The story focussed more on Patrick and Travis in this book and less so on Nualla, but it really worked and I like how the multiple point of views got handled.

The love triangle basically disappears in this book and the other love interest for Travis that got hinted at in the previous books, plays a bigger part here. I did like Travis and Parker together, but I do wish there would’ve been a bit more scenes with them doing normal things and getting to know each other. Nevertheless it was really done well and I did like their romance. Nualla and Patrick their romance get’s less attention in this book, but there was an awesome scene involving them towards the end.

In this book we learn much more about the past of some characters, the daemons and the experiments that got done. The reason behind the experiments, how it got set up and what the goal was, we also see more of what they achieved and what it really did to Patricks, Kira and Chan-rin. This book definitely adds a lot in terms of world building and I liked how with each book we learn more and know more about this world. Although there are still some questions remaining, I think the world building is done well. very interwoven into the story, with little pieces of info we get with each book.

To summarize: I really enjoyed this series and this book is probably my favourite of the three. it’s very well written and the pace flows nicely. there are revelations and new info that comes to light and the multiple plot points steadily progress. There’s a lot going on, but somehow the author manages to deal with all the topics without it becoming overwhelming. The ending felt a bit too easy and some questions remain, but there is hinted at another series that will be written and will take place in this universe, so I am excited about that and hope it ties up some of the lose ends. There’s a lot of character change and things we learn about them and the past in this book. The love triangle get’s resolved and there’s a lot of focus on Travis and Parker in this book. there are also some pieces of world building added. All in all this was a great ending to the trilogy and I am so happy that there will be more stories taking place in this world.

Do you binge read series? Tell me why or why not and if you enjoy binge reading series.

12 responses to “Review: The Other Side of Truth by Alicia Kat Vancil”