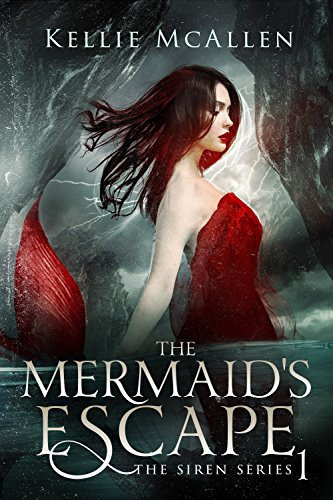 The Mermaid’s Escape (The Siren Series #1)
by Kellie McAllen

Blurb:
Four shipwrecked divers, one mermaid princess who longs for the freedom to choose… or not..

Destined to marry the gorgeous, high-ranking Kai and inherit the throne from her grandfather, Princess Coral is the envy of every mermaid in the shoal. But all she really wants is the freedom to decide her own fate.

When Coral runs away from her own wedding and escapes to the land, she knows the clock is ticking. She has five days before her human body will succumb to the curse that binds all mermaids to the sea. Overwhelmed by the harshness of a deserted island, Coral is ready to accept her fate and return to the shoal, but with the arrival of four shipwrecked divers, Coral starts to understand why her mother was lured away by the human world.

When Coral is given the choice she always wanted, will she make peace with her destiny, or risk everything to forge her own path in a whole new world?

If you like the myth, adventure, and romance of fantasy stories by authors like Jaymin Eve, Bella Forrest, and Amy Bartol, you’ll love The Mermaid’s Escape.

This is a reverse harem paranormal romance series appropriate for ages 18+.

Ever since I first heard of this book I knew I wanted to read it. A reverse harem mermaid romance book just sounded so fun. I like mermaid stories, but it can be hard to find ones that really appeal to me. And after I read one of this author’s books last week I was even more excited about this one. The Mermaid’s Escape was a great read and I am already looking forward to book 2.

The Mermaid’s Escape takes some typical elements for mermaid stories and then adds a bunch of unique ones to it. It all combines into a great story and I felt like I flew through this one. I really enjoyed the story of Coral, who for so long only did what was expected of her and when she panics on her wedding day and escapes to the surface, she finally has the chance to follow her own dreams and figure out what she wants and who she is without the pressure of society.

After she wakes up on an island during a storm she eventually sees four divers who almost drown and saves them. After that they end up stranded on a deserted island. I loved reading about how Coral experienced this whole new world, everything is strange for her and she doesn’t know a lot about the human world. I thought this was really well written and I liked experiencing things through Coral’s eyes. The setting on the island was something I hadn’t expected about this book, but I thought it really worked. It gave Coral a limited amount of space to discover and the time to learn more about the human world.

I really liked Coral as a main character. How she dreamed of more, wanted to see the human world and forge her own path. But at the same time she also felt sad about what she had to leave behind. I liked seeing her discover things about the human world. She could be a bit naive and take things very literal, but I kinda liked that and it made sense with how she didn’t know much of this world. And she was pretty confident and sure of what she wanted now that she had the chance to follow her dreams.

The reverse harem aspect was well done too. I liked how she met the men and how they didn’t know each other too well either and they all were pretty different from each other. But at the same time it was a bit hard at first to get a clear picture for each of the men. Especially as at first she can’t easily communicate with the men, so their interactions are a bit limited. Although the reader does understand what the men are saying ofcourse, so that was interesting.

Even at the end of the book I feel like their personalities aren’t as fleshed out as I would’ve liked, but I hope we get to know even more about them in the next book. Especially given the turn the story takes at the end and I feel that the new setting probably allows us to get to know everyone better. I do have a pretty good feel for all the men now and I am excited to see what is next.

I liked the romance, although with the communication issue standing between them at first it mostly felt like attraction and comfort for a long time. But I felt that developed over the course of the book when she got to know the men a bit better. It did feel a bit weird sometimes with how different Coral was from the men and she did seem a bit young compared to them at times. But she did seem to be clear on what she wanted, so that helped a lot. There is a bit of jealousy and tension with the reverse harem aspect, but just a bit until they resolve things.

I liked Kellie McAllen’s take on the mermaids. Although most of the story takes place on land, there are still a lot of things we learn about the mermaid society because of what Coral knows and does. The first few scenes in the sea were interesting as well. And I am curious about the whole curse thing and what’s the whole truth about that.

To summarize: I really enjoyed this unique mermaid tale. The mermaid theme combined with the reverse harem romance really worked here. I liked how we get to experience the human world through the point of view of mermaid Coral and how new everything was for her. I liked Coral and how she was so new to everything an seemed a bit naive, but also was petty sure about what she wanted. The romance was nicely done. It builds slowly and I didn’t fully feel it at first as she couldn’t communicate well with them, but I liked the romance more as the book progressed. It took some time to get a feel for the different personalities of the four men, but I did liked how they were all different. All in all this was a good start of this new series and I really enjoyed the author’s writing. I am looking forward to book 2 as I am really curious where things go from here onward!

Do you like reading about mermaids? Tell me about a great book with mermaids that you read!

14 responses to “Review: The Mermaid’s Escape by Kellie McAllen”