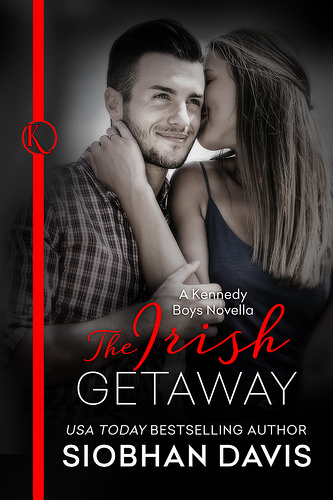 The Irish Getaway (The Kennedy Boys #3.5)
by Siobhan Davis

The Kennedy Boys go wild on vacation in Ireland!

It’s the summer before they start college, and Faye and Ky are visiting her home turf together—it’s Ky’s first time in Ireland, and her first trip home since her parent’s tragic death.

After a blissful three weeks on their own, they welcome the rest of the Kennedy clan when they arrive on Irish soil for the vacation of a lifetime.

Watch the sparks fly as family emotions run high and the Kennedy boys’ party up a storm, creating mayhem and madness wherever they go.

This dual POV short novel should only be read after Keeping Kyler.

The Irish Getaway is the story of The Kennedy Boys’ vacation in Ireland. The first weeks Faye and Kyler are there with just the two of them and then the rest of the Kennedy Boys joins them. I think this book is a great addition to the series for fans of the series or those who want a little more Kyler and Faye. It is a fun read, but at the same time I thought it was missing something for me to fully enjoy it as much as the other books.

As I am used to by now from the Kennedy Boys series, this novella/ short novel is filled with drama, parties and some family trouble as well. I thought it was fun to finally get to visit Faye’s home country Ireland and her own house. I just would’ve liked to see a bit more of Ireland. I was so curious to see a bit of Ireland and sadly I felt the focus was at times more on the party scene than the country and the parts where they visit the sights are mostly summed up. I still hope this author will set one of her full length books in Ireland one day. Nevertheless I still thought it was nice to see a bit of Faye’s life here, her friends and she gets to meet her grandparents for the first time.

I especially liked the small glimpses we get of the future stories, we get some glimpses of what’s going on with the other Kennedy Boys and I started making some guesses who the love interest for who will be. These glimpses make me wish I already could get my hands on the rest of the Kennedy Boys stories as I am curious about each Kennedy Boy their story and romance. I think getting their point of view will give me a better understanding of them and I am looking forward to see them all fall in love. I also liked the scene where Faye meets her grandparents for the first time. It’s also nice to see Faye and Kyler be so happy after what they’ve gone through.

While I did enjoy this book I did think there was a bit too much focus on the parties. I guess I just don’t really care for those type of scenes. I think I read enough about Faye and Kyler with the first three books and just want to know more about the other Kennedy Boys now, but as Faye and Kyler are the narrators here the focus is still mostly on them. And they are so happy in love, can’t stop touching another and horny all the time, it just felt like a bit too much for me at times.

I didn’t really care for the little bit of suspense plot line, but I do like how we saw a bit more of Whitney and also got a glimpse behind her tough outside armor. I thin k there’s a lot of hurt and fear she’s covering up. I also felt like the story in this book was less strong/ solid somehow as the full length books, it was like there was something missing, even though I can’t quite put my finger on what. Or maybe I just wasn’t quite in the right mood for this book.

About 63% of the book is the Irish Getaway story and after that is some bonus material and the first chapter or so of Loving Kalvin and Saving Brad. The bonus materials tells some scenes from Finding Kyler and Losing Kyler we didn’t get to see or from another point of view, which was a fun addition. There are some Kyler and Brad scenes and there was a scene from Kaden’s point of view, which makes me curious about his story. And at the other time I had hoped the older Kennedy Boys would be a bit more mature somehow? Not sure, anyway I am curious about Kaden and Keven’s stories, especially with something that happened in this book makes me know what that was all about.

To summarize: This was a fun addition to the series. It’s a shorter read than the rest of the books, but there’s still a lot going on. It tells the story of the Kennedy Boys’ vacation in Ireland. There is some drama, family troubles and a lot of partying going on. It was a fun read and it’s nice to Kyler and Faye so happy, but by now I just want the other Boys their stories, so the parts where we get glimpses of that were my favorite part of this one. Kyler and Faye are a bit over the top happy and horny in love and it felt a bit much at times, but it’s also nice to see them happy after what they went through. I had hoped to see a bit more of Ireland, but that was limited. I didn’t enjoy this one as much as the rest of the series and felt like there was something missing to fully pull me in, but it is a nice addition to the series. After the Irish getaway story there is some bonus materials and sample chapters of the next two books as well. All in all I would recommend this one for fans of the series!

Do you read optional novella’s that are part of a series?

4 responses to “Review: The Irish Getaway by Siobhan Davis”